While many SSD manufacturers had released both heatsink and non-heatsink versions of their latest PCIe 4.0 drives, Kingston did not offer a heatsink option to complement their high-speed Renegade SSD when it was initially released, and it came with a heat spreader. Even though gamers can use a third-party NVMe heatsink, many still prefer to buy an SSD with a built-in heatsink so they don’t need to go through all the setups. With the heat spreader version weighing between 7g to 9.7g, the heatsink model weighs between 32.1g and 34.9g (depending on the storage size). And our 2TB model falls under the latter category. Users will also be able to remove the heatsink to service the thermal pads if the need arises. The heatsink is black in color to match the main SSD PCB and features a gamer-centric design. The Kingston FURY logo is in the middle of the top portion, along with the Renegade logo on the corner right side and there is a mention of the PCIe 4.0 NVMe M.2 on the opposite end. For gamers who are looking for a speedy PCIe 4.0 drive for their PlayStation 5, the new Renegade HS is a good choice for the console. We tried the new FURY Renegade HS on our Sony PlayStation 5 console and the drive fits perfectly. PS5 owners won’t need to worry if the heatsink will be bigger to fit the slot or not. Let’s get one thing clear. Apart from the fact that the new Renegade comes with a heatsink, the drive is basically still the same as the one released last year. While there isn’t any confirmation if any components have been changed, Kingston says that the Phison E18 is still the controller and the drive uses Micron 176L 3D TLC NAND memory chips, along with DDR4-based DRAM. 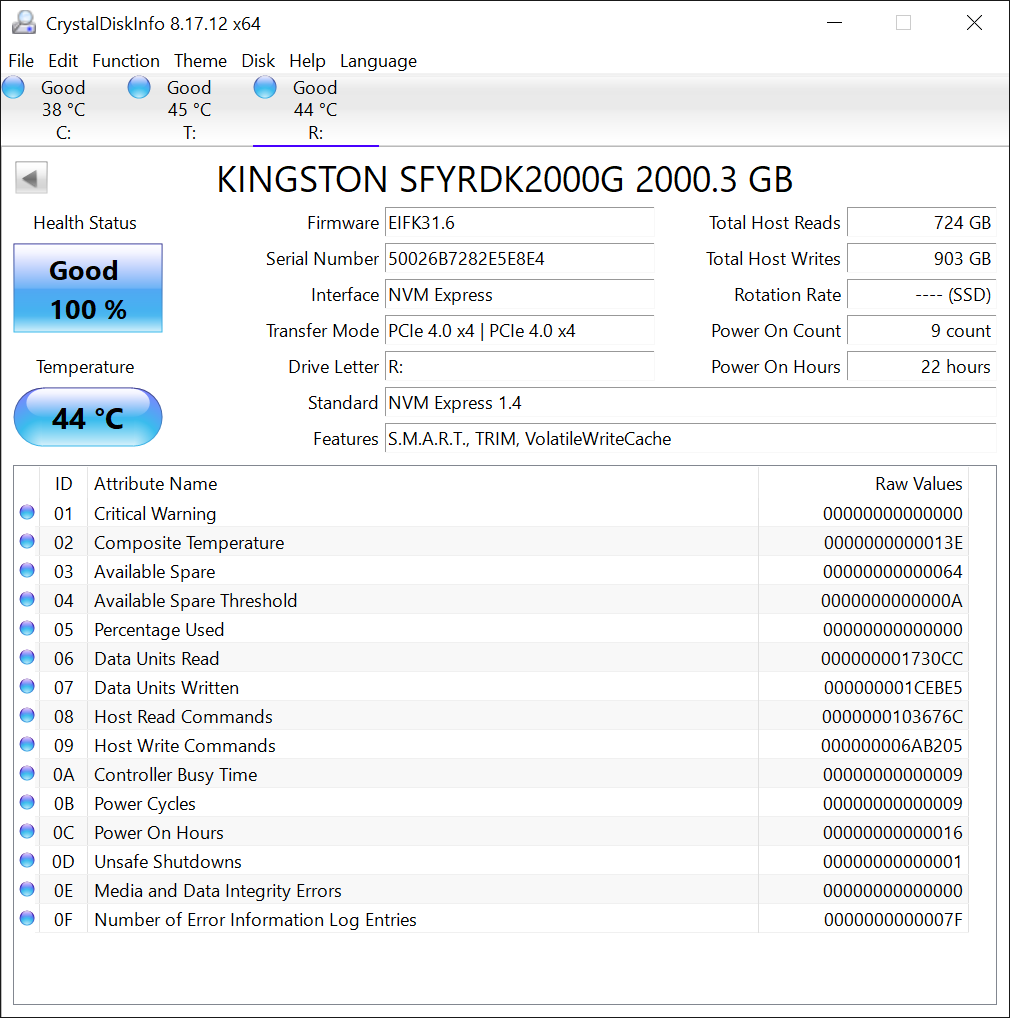 Even the read and write speeds are the same as their non-heatsink counterparts. While all of the storage models feature the same 7300 MB/s read speed, they do differ in terms of write speed. The base 500GB model can output a modest write speed of 3900MB/s, the 1TB model with 6000MB/s write, and the bigger 2TB/4TB with 7000MB/s write speeds.

For gamers who plan to place this PCIe 4.0 drive on their gaming laptops or handheld systems, the 2TB Renegade HS requires only 5mW for idle conditions, 0.33W for average usage, 2.8W for max read performance, and 9.9W for maximum write performance. We used the same testbed that was used to review the earlier non-heatsink version of the Renegade. Our testbed is equipped with the ASUS TUF GAMING X570-PLUS AM4 motherboard, the MD Ryzen 3800XT CPU, an XFX Radeon 5700 XT THICC II GPU, a pair of Kingston FURY Renegade 3600MHz DDR4 RAM, Kingston KC2500 SSD, the Corsair iCUE H100i RGB PRO XT AIO cooler and the XFX XTI 1000W PSU. Both the M.2 slots of the motherboard are designed to work with PCIe 4.0 drives. We decided to run the benchmarks and speed tests on Windows 10 OS.

For the CrystakDiskMark tests, the drive was able to perform 7352MB/s SEQ1M read performance, which is faster than the specified speeds. While our writer speeds did not hit the 7000MB/s mark, we achieved SEQ1MN Q8T1 write speeds of 6896MB/s. For AS SSD performance, the sequential read and write speeds are 5989MB/s, and 5928MB/s, respectively. With the DiskSpeed test, we hit read speeds of 5869MB/s and write speeds of 5605MB/s. For a DiskBench test of copying an entire GTA 5 game folder within the drive, the Renegade HS took almost a minute to finish the tasks with a transfer rate of 2005MB/s. We also ran benchmarks such as the PC Mark Storage test, 3D Mark Gaming Storage test, ATTO, and FFXIV game test. Take a look at the scores below. 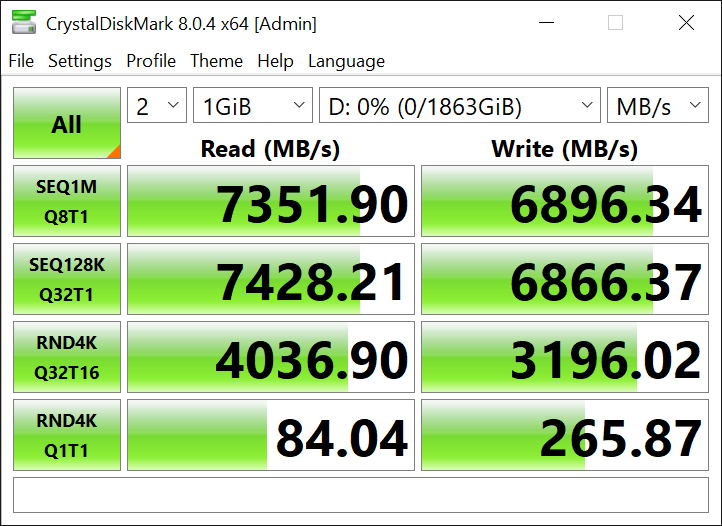 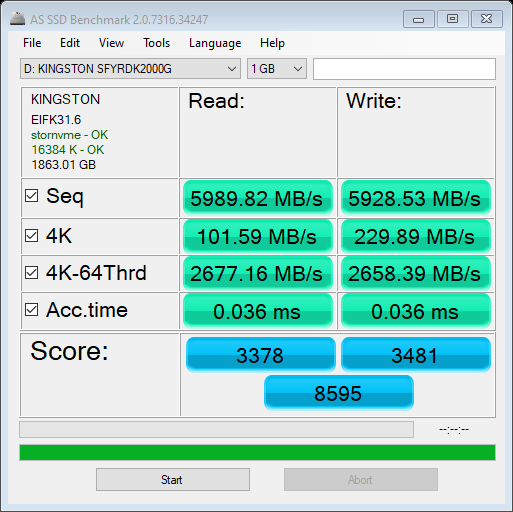 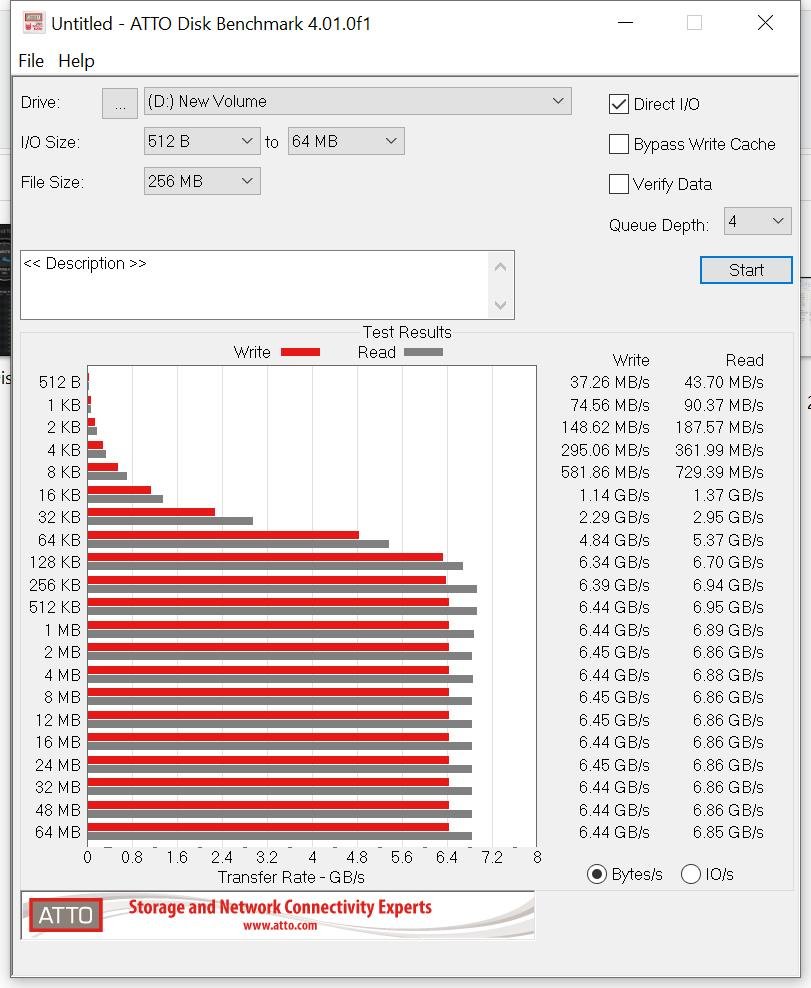 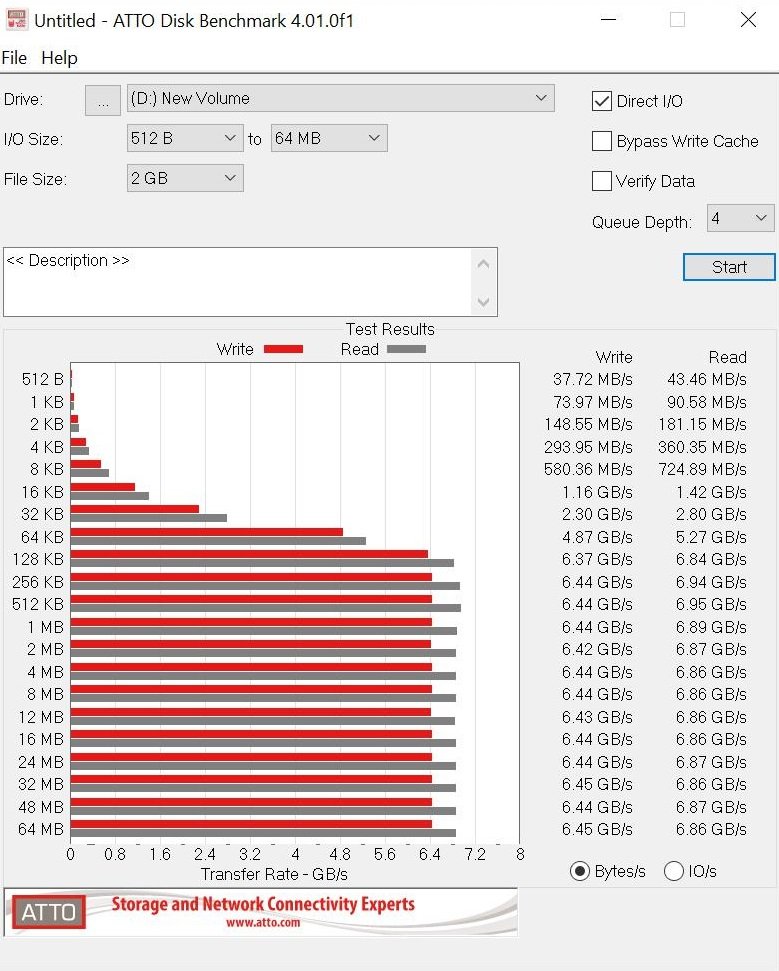 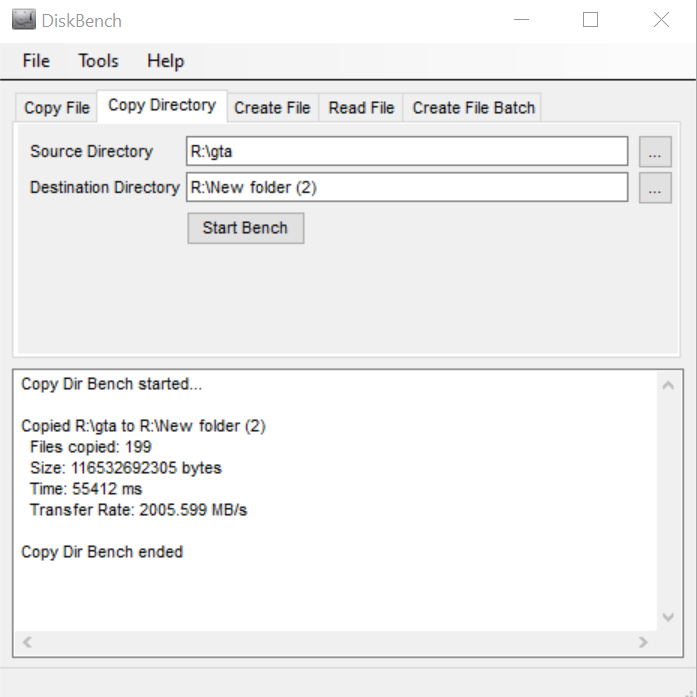 In terms of manual copy speed tests, we made a copy of a 100GB test file to see the transfer rates. The drive was able to finish the task within 46 seconds and the copy speeds were at an average of 2GB/s. We also noticed that there were no drops in copy speeds during the copy task, thanks to the DRAM. 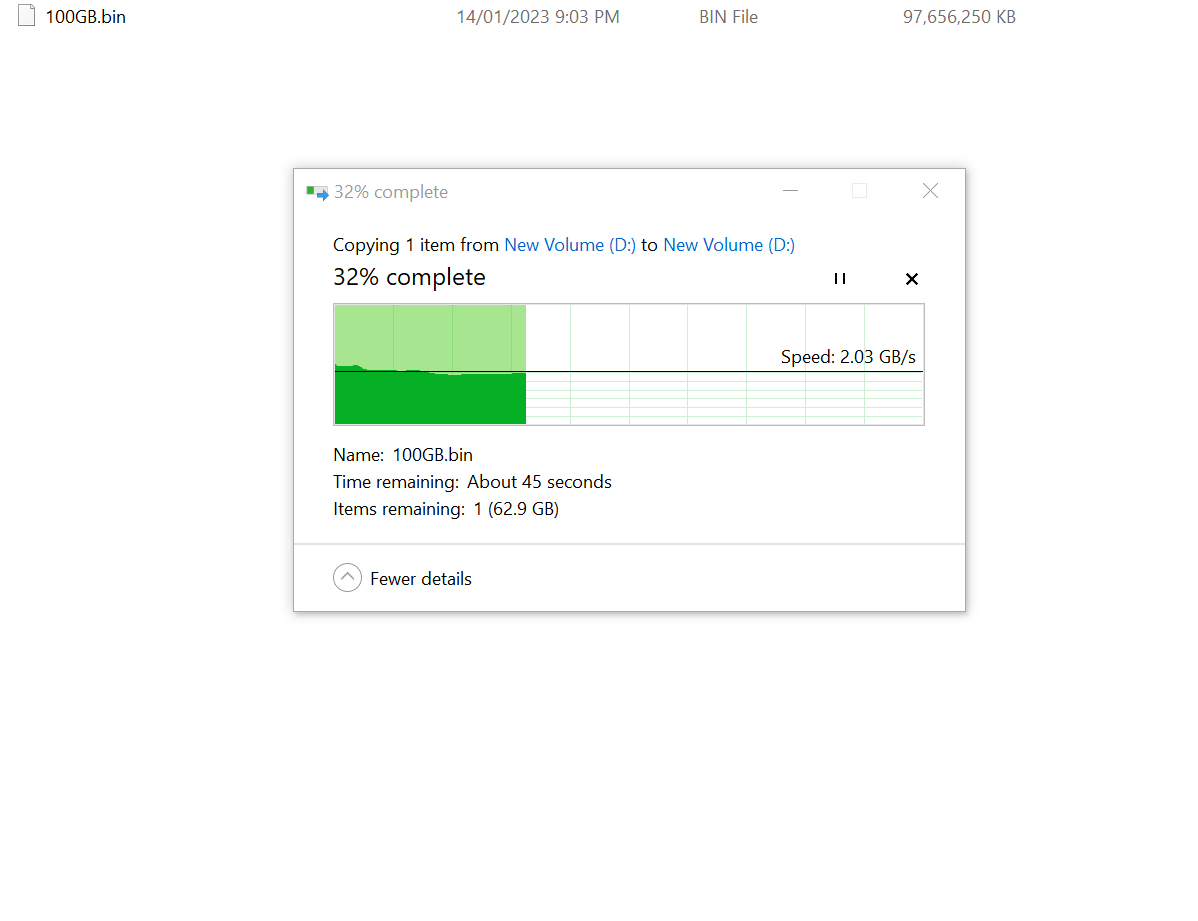 While having a heatsink usually helps to keep the temperatures down for better performance, it does look like the loading performance of the FURY Renegade HS drive is more or less the same as its non-heatsink counterpart. During the initial read test, the Renegade HS achieved a read speed of 6502MB/s. On the contrary, we got a read speed of 6557MB/s for the non-heatsink model over a year ago. To make sure of things, we had to reformat and perform the read test multiple times and our Renegade HS still achieved the same 6500MB/s performance. 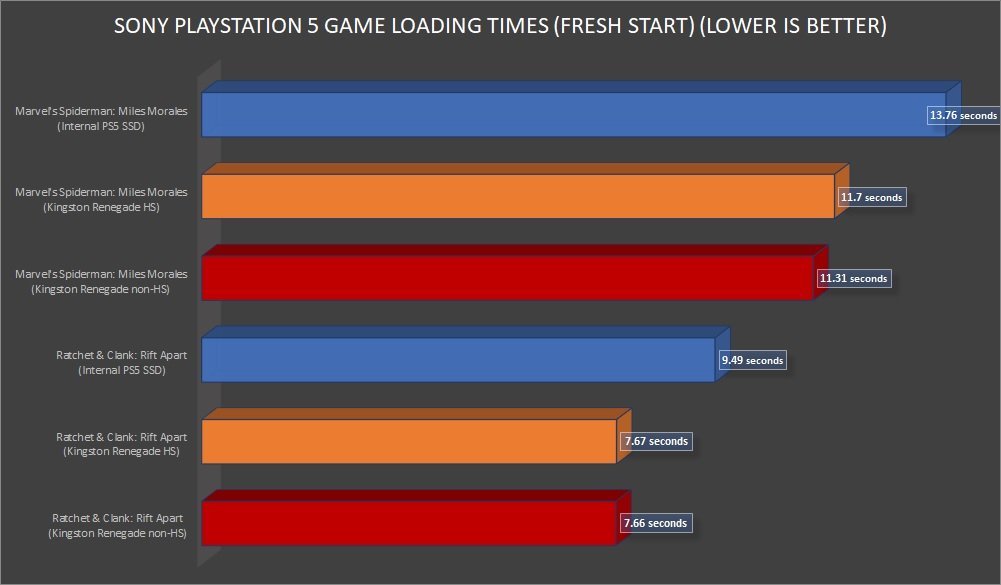 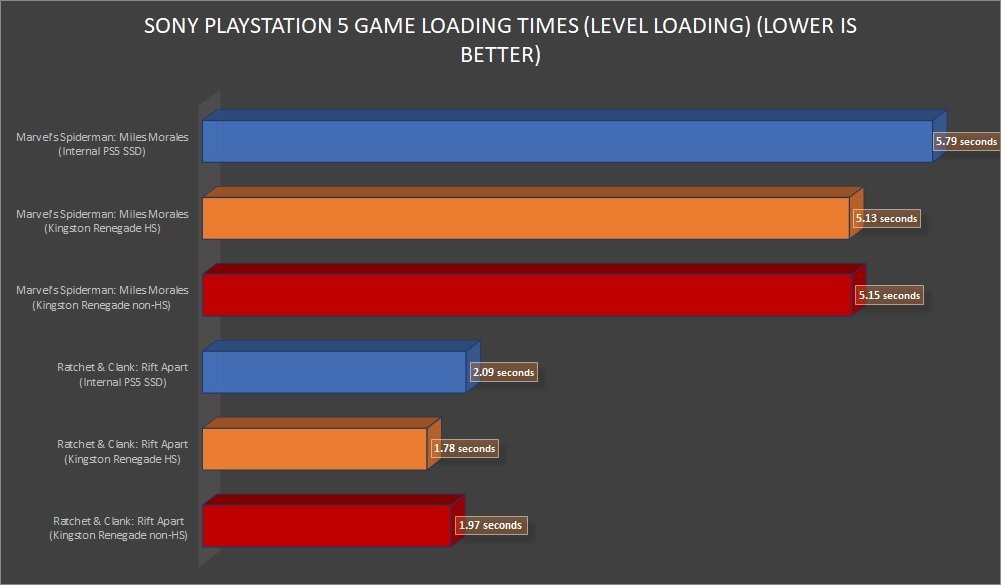 The main selling point of the new model is of course the heatsink that comes preinstalled with the drive. During our benchmarks, the SSD’s temperatures reached up to 69 degrees at peak performance when we ran CrystalDiskMark repeatedly multiple times without a break. Even at high temperatures, the read-and-write performance was still high without any throttling. During idle situations, the drive stays at 45 degrees. And when running a benchmark from an idle stage, the drive hits 60 degrees. Do keep in mind that these temperatures were monitored on an open testbed and can vary when it’s used in a gaming cabinet or on a gaming laptop. On the contrary, the non-heatsink model stayed at 48 degrees in idle situations and 70 degrees during peak operations. When we tested the base model with the motherboard’s M.2 heatsink, the temperature was also 60 degrees at peak workloads and this is the same as the Renegade HS temperatures.

While there are many PCIe 4.0 drives in the market at competitive prices, the Kingston FURY Renegade SSD is still one of the fastest PCIe 4.0 drives on the market with the exception that there wasn’t a heatsink version of the product when it was released over a year ago. With the introduction of the new heatsink model, both gamers and PS5 owners will be more inclined to buy the drive for their gaming PCs or the PlayStation 5 console. The drive with its preinstalled heatsink also fits perfectly well on the PS5 and the loading performance is faster than the console’s internal drive. The heat sink version of the FURY Renegade features the same read/write speeds as its non-heatsink counterparts. The part where the new heatsink models excel is heat management where the drive can maintain lower temperatures for stable performance during idle and peak stages. The Kingston FURY Renegade heatsink drives are available in 500GB, 1TB, 2TB, and 4TB storage variants.