While gamers usually depend on high-end monitors or televisions to get the best out of their gaming PCs or game consoles, most of the projectors out there do not offer the same degree of high refresh rates and low input lag performance as their monitor counterparts. BenQ had recently unveiled their high-end gaming projector called the TK700STi and we got a chance to try out the new device.

BenQ is known for its high-quality projectors and its latest TK700STi multimedia projector looks almost the same as any other model in its portfolio, The review unit that we got came in an all-white color, which is a color scheme BenQ usually uses throughout most of its projectors. However, the front portion of the device is colored in grey. The projection lens is placed on the right side of the device, along with the “4K HDR” branding right under the glass. 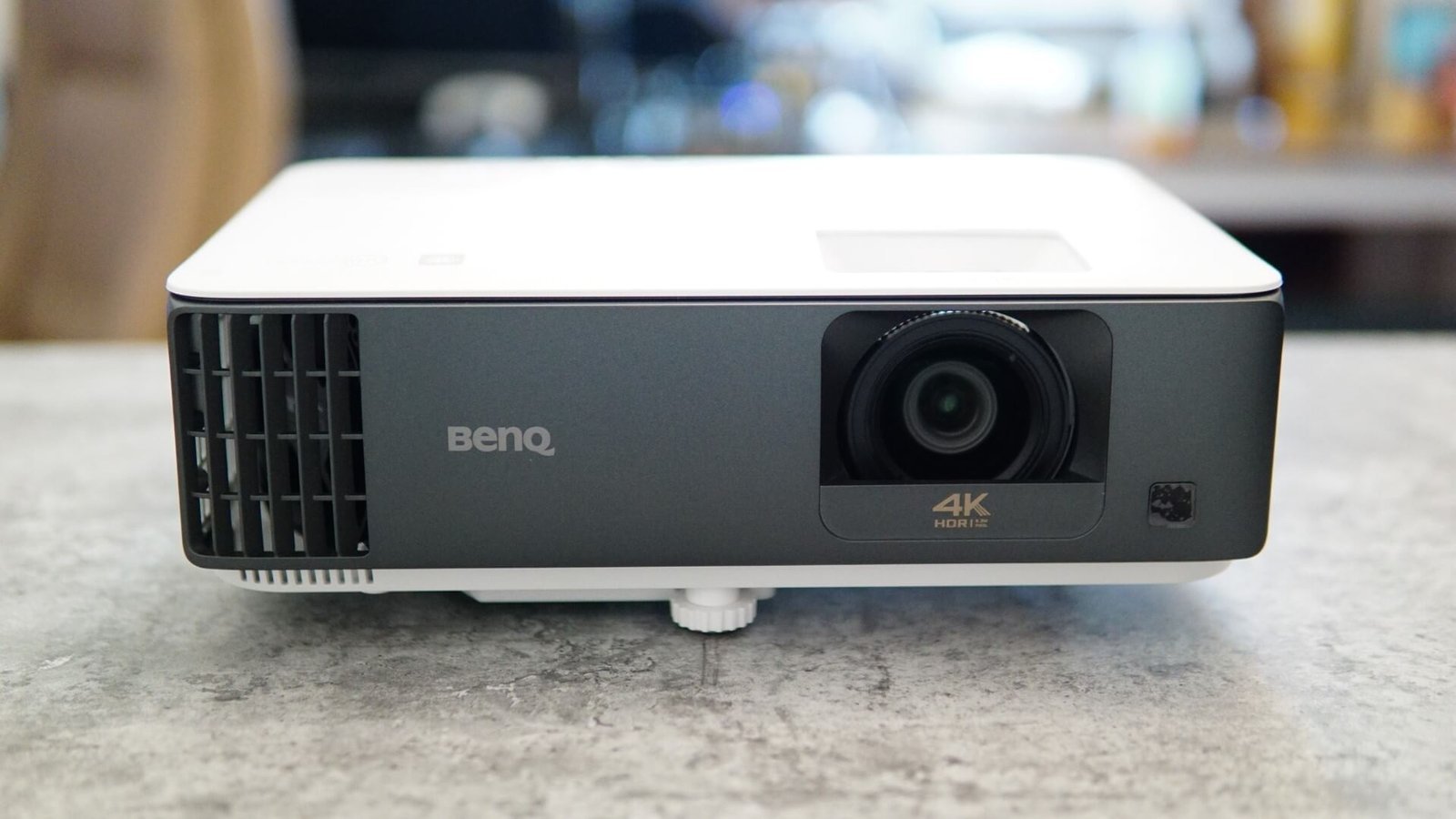 There is also the dial ring on the top side that is used to adjust the focus of the projection. On the right end of the front portion is an IR receiver for the included remote. And on the left side is the main air vent to push out all the hot hair generated while using the device. The vent is extended on the left side of the projector, You can also see air vents on the right side of the device, which is where the air goes inwards. BenQ has made sure there is an adequate amount of ventilation to keep the device cool. 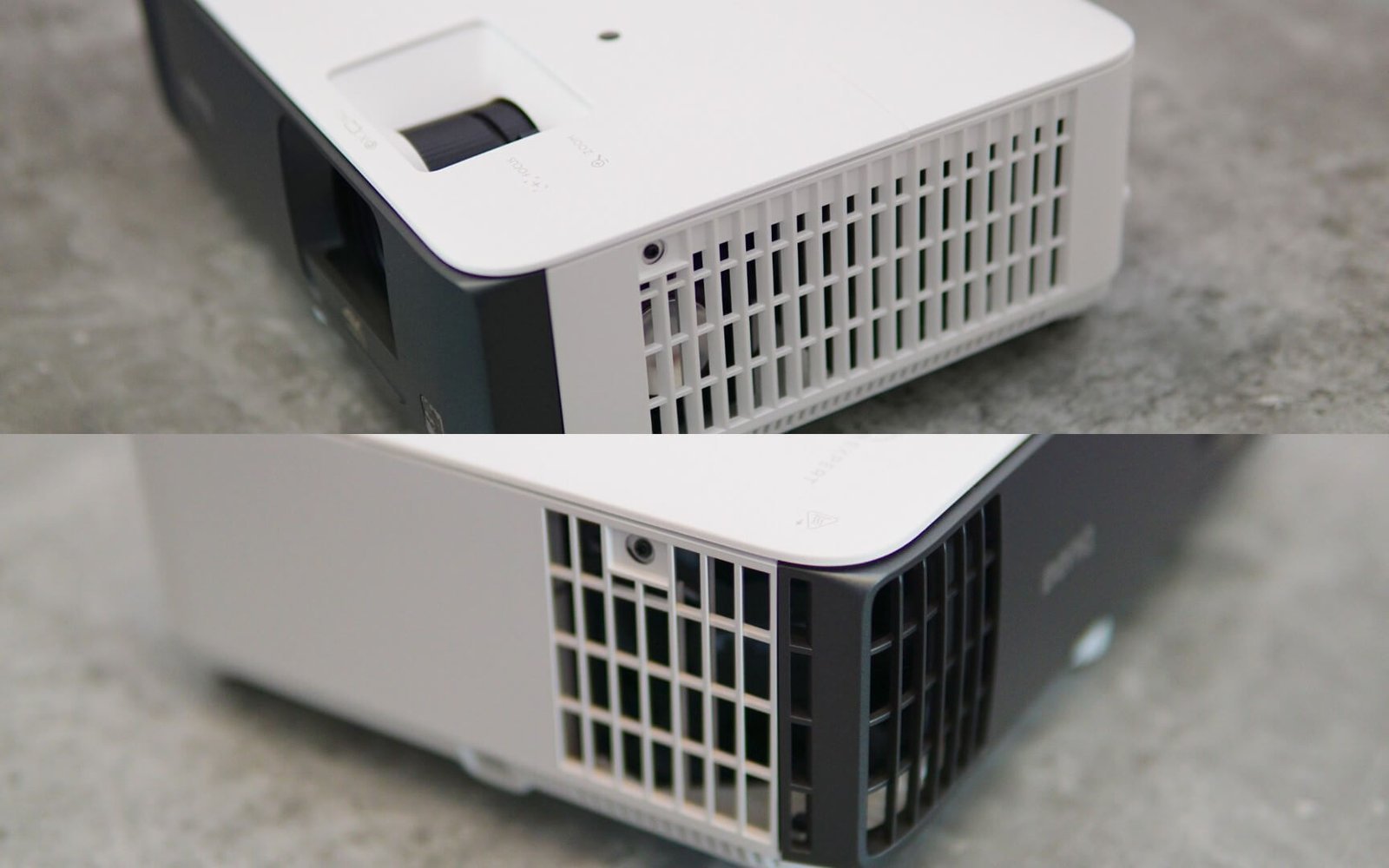 On the top side of the projector are a series of control buttons that can be used to navigate through the menu of the projector. You get the standard directional buttons, along with the Back, Menu, and Mode buttons. There are also LEDs such as for Power, Temp, and Lamp. The Source button lets you switch between different video inputs and the Eco Blank lets you hide the screen when needed. There is also another IR remote sensor down of the power button. 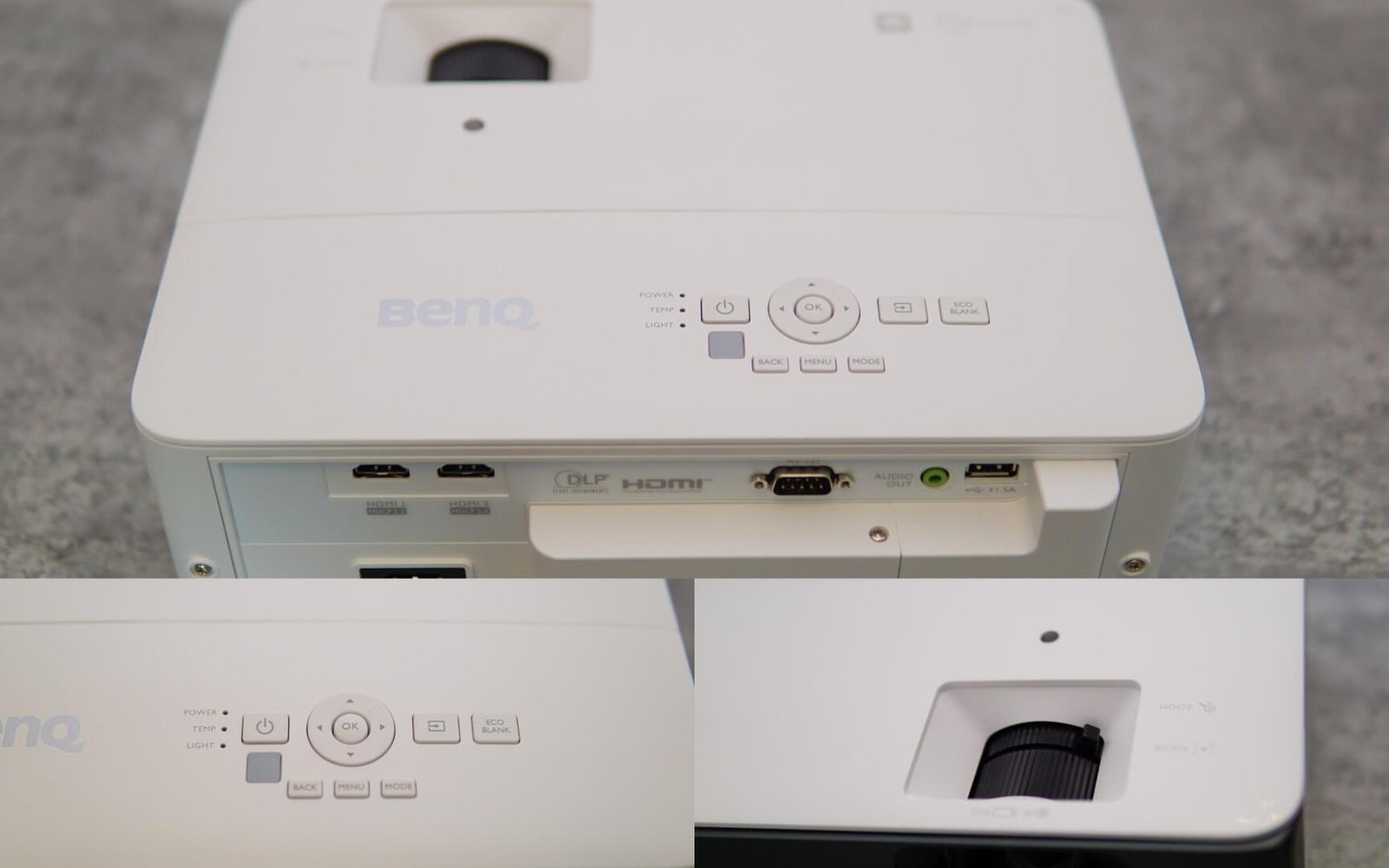 On the rear side of the device, the projector features two HDMI 2.0 ports, an RS232 control port, an audio jack, a USB Type-A port, a QS01 media streaming port for ATV dongle, and the power connection. 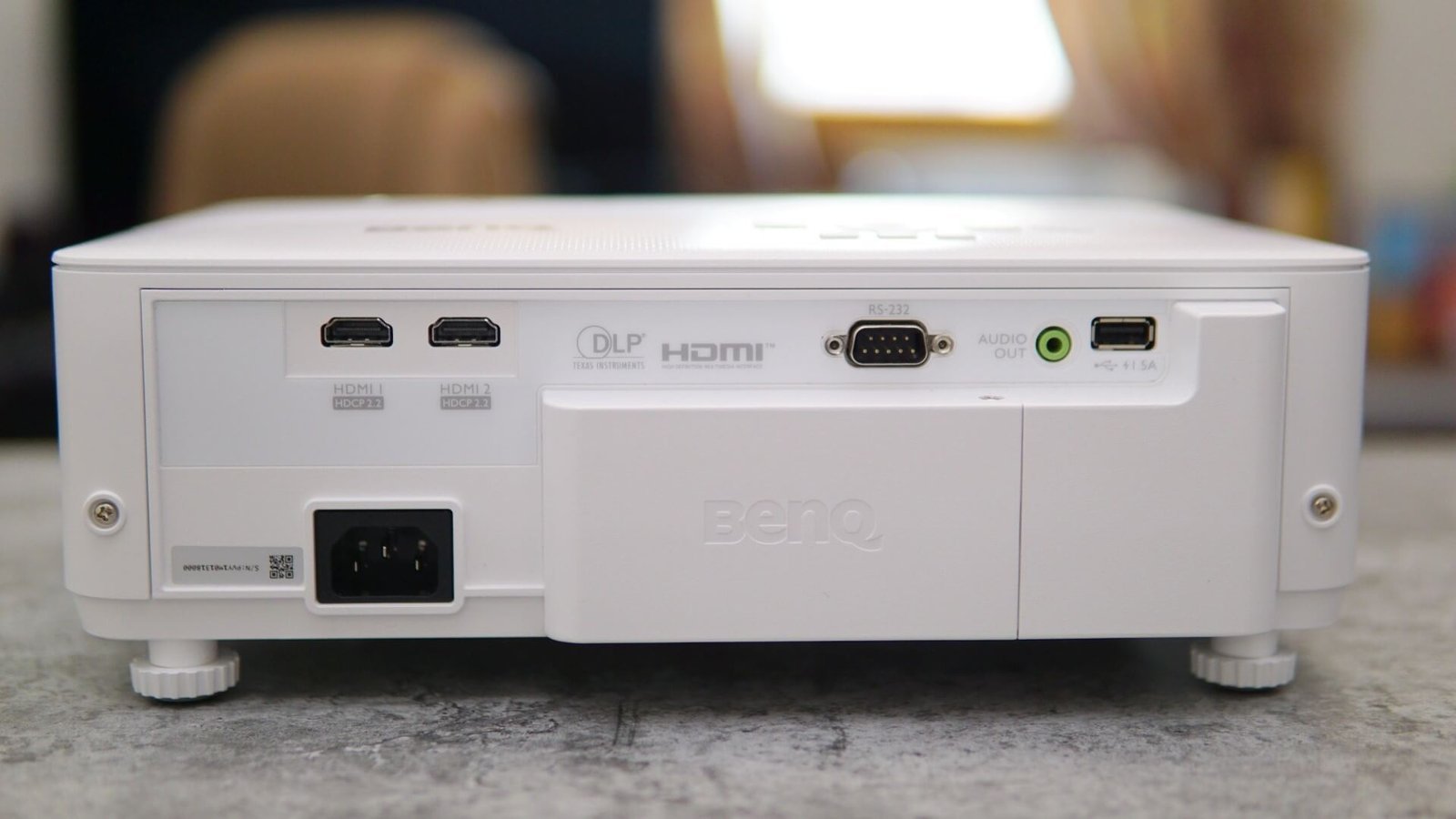 The Bluetooth remote that comes with the projector is designed to work with the Android TV OS. Apart from the usual controls such as adjusting the focus, source selection, power, and the directional buttons, the remote also features the back, home, and settings buttons, along with a projection menu button and also a dedicated button for Google Assistant. The remote is white in color. The TK700STi is designed to be a multimedia and gaming projector with performance that exceeds other models in the market. The projector is capable of providing projection up to 120-inches, along with the inclusion of 4K HDR capability. 4K resolution and HDR gaming are one of the biggest selling points of the latest generation of game consoles and BenQ has it covered. The HDR standards supported are HDR10 and HLG. The projector also comes with special HDR modes such as HDR Game if you wish to play HDR-supported games from the PS4, PS5, or Xbox One and Xbox Series X consoles. The DLP projection also features a contrast ratio of 10,000:1 for all those deep blacks and coverage of 1.07 billion colors. The Picture modes include Bright, Living Room mode, Game mode, Sports mode, Cinema (3D), HDR10, HDR Game), HLG, and custom user mode. Game modes include RPG game mode, SPG game mode for sports, and an FPS game mode. One of the most highlighting points of the TK700STi is that the input lag is only 16.67ms at 4K 60hz resolution. It’s the world’s first to come with both HDR, 4K resolution, and low input lag capability at 60Hz.

While this is still far away from dedicated gaming monitors, it’s better than most standard televisions out there and almost on par with high-end 4K TVs. The low input lag will help a lot for those who play competing online games on the Xbox and PlayStation platforms. BenQ also mentions that playing 4K games at 30Hz has an input lag of 33ms, 1080p 60Hz at 16.67ms, 1080p 120Hz gaming with 8.33ms input lag, and 1080p 240Hz at 4ms input lag. However, the projector does not support 4K gaming at 120Hz. 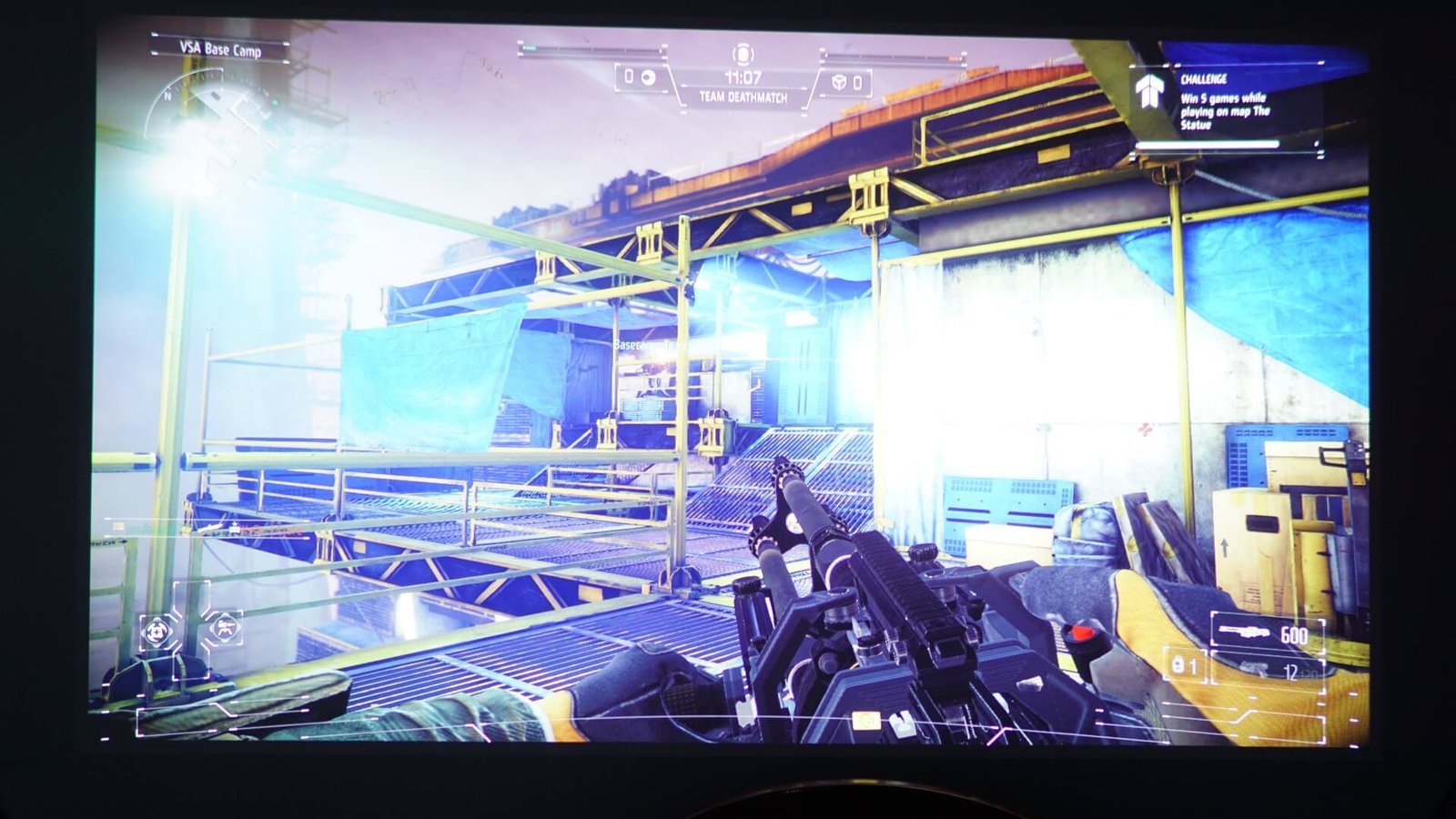 While I didn’t have the PlayStation 5 or the Xbox Series X to try with the projector, I did get to connect the device with a PlayStation 4 Pro and the Xbox One X. We did try some games such as Halo 5 on Xbox One X and Killzone: Shadowfall multiplayer modes on the PS4 Pro. The input lag is almost as good as playing with a gaming monitor. We also tried games that have HDR modes with the PS4 Pro, such as Uncharted: The Lost Legacy and Horizon Zero Dawn. The colors popped out great and the gameplay was enjoyable. The TK700STi is also designed to work great with the Nintendo Switch too and any media units such as Blue-ray players and streaming devices. 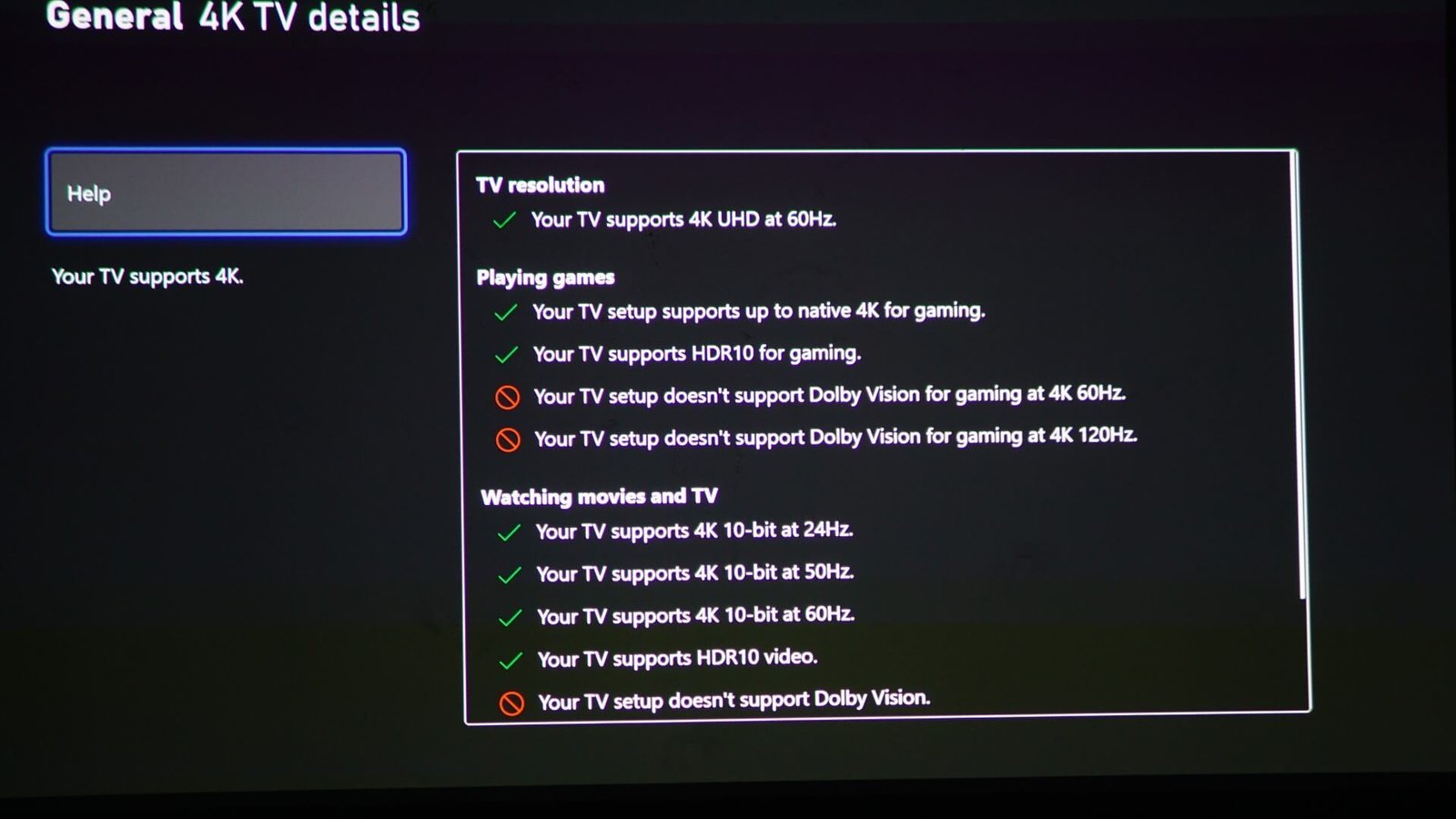 And since the TK700STi is a Google-certified Android TV projector, you get all the goodness of the platform and install most of the multimedia applications available. Users will be able to install apps such as Netflix or Amazon Prime and get to watch the latest movies in 4K HDR. The Android TV OS works smoothly and I didn’t notice any sort of lags with the user interface.

While playing games on a large-sized television has its merits, there are some that prefer to use a projector to watch all their favorite TV shows and movies and also play console games. The BenQ TK700STi is a dedicated gaming projector that matches the performance of high-end televisions while also able to provide projection up to 120-inches. 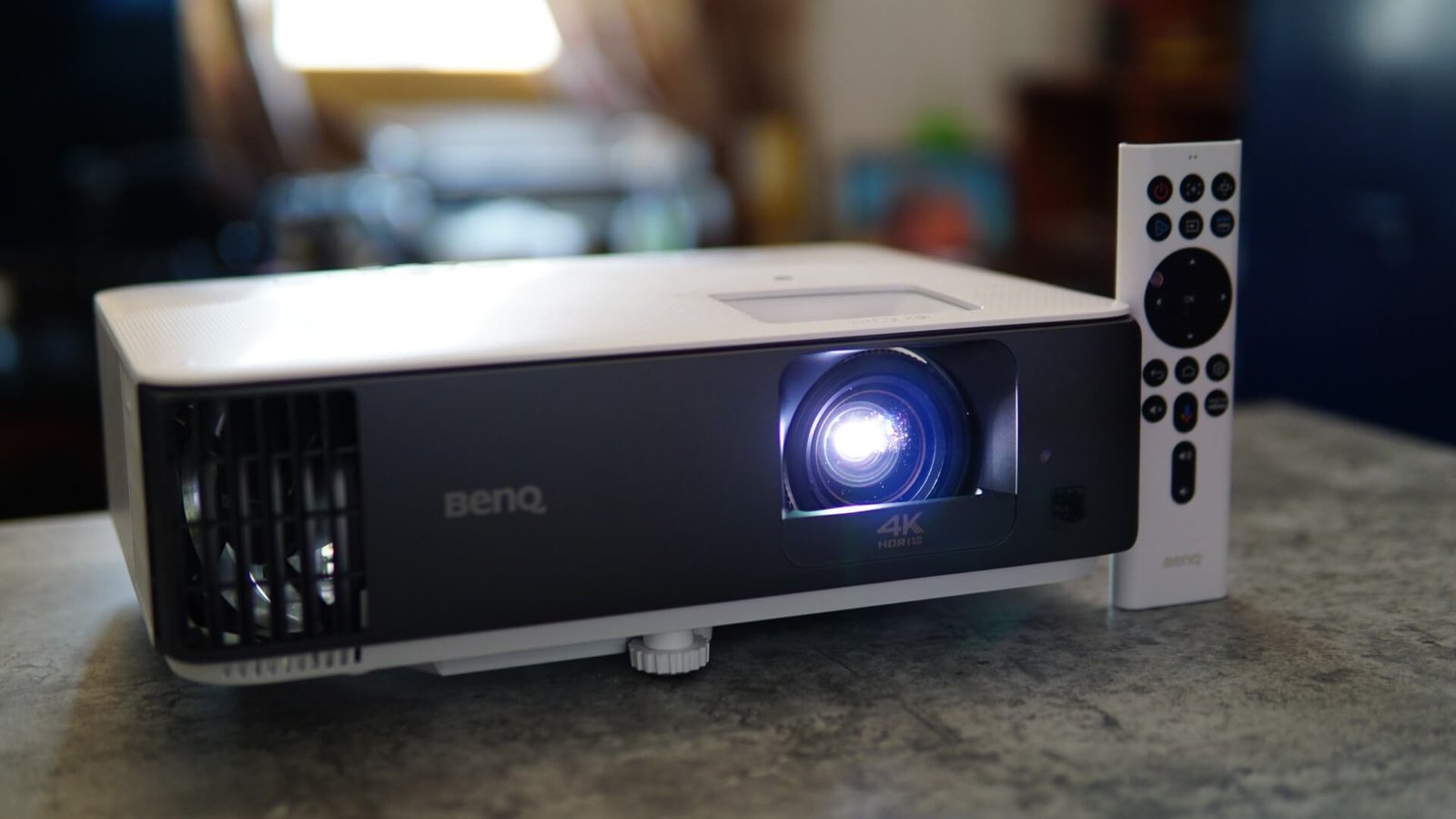 The input lag is just one of the best features of the projector along with the 4K HDR capability at 60Hz and 1080p resolution up to 120Hz refresh rates. The inclusion of the latest Android TV OS is an added bonus where users will also be able to use a smart operating system and install their favorite apps, watch through Netflix or other media platforms, and more.

snakebyte to launch gaming controllers and accessories for Google Stadia