Today, players can jump into Shoppe Keep 2’s whimsical character creator on Steam. “Ahead of Shoppe Keep 2’s Early Access launch on 26th April, we invite players to create their very own Shoppe Keepers and share them online,” said the company in a statement. 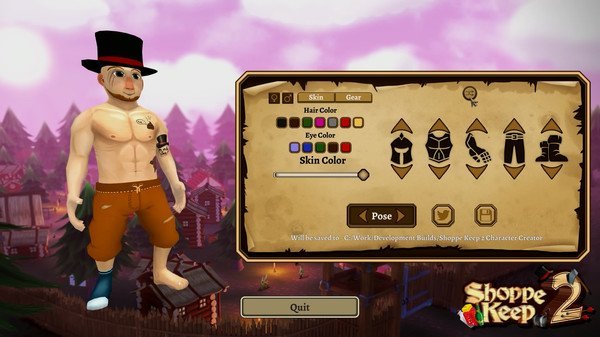 In this preview of the character creator from the upcoming fantasy management game Shoppe Keep 2, players can create and share Shoppe Keepers that hail from the busy land of Customerania. They can experiment with a variety of hair styles, facial hair options, clothing and tattoos!

Everybody who jumps in and plays the Shoppe Keep 2 Character Creator Preview will be rewarded with an exclusive cosmetic item in the main game at Early Access launch – the Golden Keeper outfit.

Custom Shoppe Keep 2 Figure Competition
Players who share a screenshot of their own Shoppe Keeper on Twitter or Instagram with #WeAreKeepers will be automatically entered into a prize draw to win a figure of their very own creation! We will take the in-game model of the winning character, chosen at random, and 3D print a bespoke figure for the lucky winning player. About Shoppe Keep 2
Shoppe Keep 2, the much-anticipated sequel to the 2015 original, will launch in Early Access for PC, Mac and Linux on 26th April 2018. The new game will expand upon the unique concept and gameplay of the original Shoppe Keep. Players will be tasked with running and growing their own fantasy store, selling armour, weapons and potions to adventurers and NPCs – but this time they won’t be alone.

Brand new to Shoppe Keep 2 is online multiplayer, which will see players teaming up with friends in order to run a store together. Shoppe Keep 2 also features a diverse open world for players to explore, full of dangerous creatures to hunt and rare loot to find – all of which feed into the titular Shoppe Keeping. Take on a venomous spider and sell its poison, or hunt for special loot that will make quite the profit.

With players themselves adventuring this time around, they will also need to kit themselves out with armour, weapons and potions – which is why every single item that can be sold to customers can also be equipped or used by the player character.