SAPPHIRE Technology announces the heavily anticipated NITRO+ AMD Radeon RX 7900 Vapor-X Series Graphics Cards, with breakthrough performance and incredible clock speeds for both gamers and creators 4K and beyond. The cards are crafted with SAPPHIRE’s signature cutting-edge cooling features to push high framerates with the optimal balance of heat and noise.

Experience a new standard for ultra-enthusiast class gaming performance with the NITRO+ AMD Radeon RX 7900 Graphics Card with Vapor-X technology. The NITRO+ AMD Radeon RX 7900 XTX Vapor-X Graphics Card headlines with 6144 stream processors running with two clock settings, including a Boost Clock of up to 2680 MHz and a Game Clock of up to 2510 MHz. It also offers 24GB of high-speed GDDR6 memory clocked at 20 Gbps with 96MB of second generation AMD Infinity Cache technology.

The new Graphics Card features a GPU with 84 Compute Units and 5376 stream processors, a Boost Clock of up to 2560 MHz and a Game Clock of up to 2220 MHz. Enjoy breakthrough performance on the NITRO+ AMD Radeon RX 7900 XTX Vapor-X and XT respectively with 24GB and 20GB of GDDR6 high-speed memory clocked at up to 20 Gbps with 96MB and 80MB of Infinity Cache technology. The graphics card has support for up to 4 output ports including 2x HDMI 2.1 and 2x Display Port 2.1 ports with DSC outputs to support the latest monitors on the market.

The NITRO+ AMD Radeon RX 7900 XT Vapor-X Graphics Card features a GPU with 84 Compute Units and 5376 stream processors, a Boost Clock of up to 2560 MHz and a Game Clock of up to 2220 MHz. Enjoy breakthrough performance on the NITRO+ AMD Radeon RX 7900 XTX Vapor-X and XT respectively with 24 GB and 20 GB of GDDR6 high-speed memory clocked at up to 20 Gbps with 96 MB and 80 MB of Infinity Cache technology. The graphics card has support for up to 4 output ports including 2x HDMI 2.1 and 2x DisplayPort 2.1 ports with DSC outputs to support the latest monitors on the market. 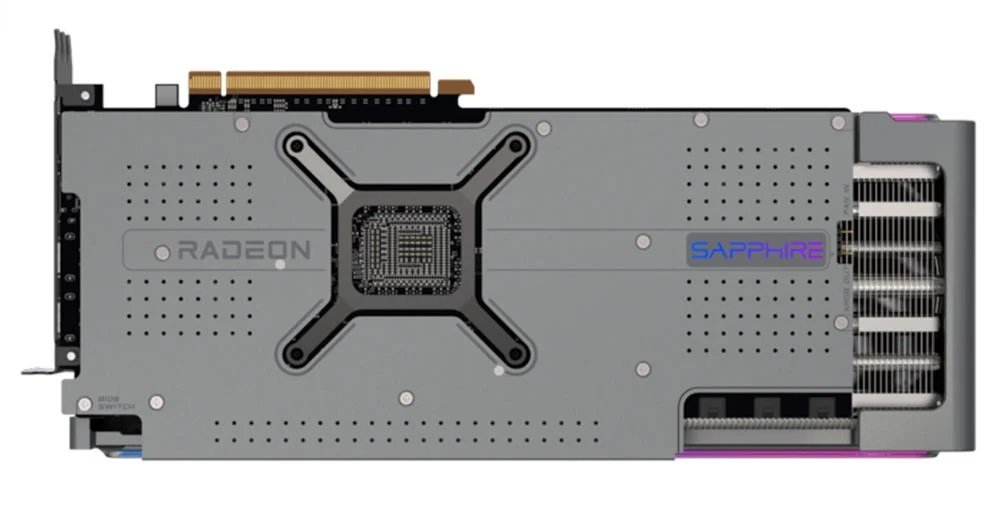 Vapor-X Cooling is BACK
The NITRO+ AMD Radeon RX 7900 Vapor-X Series Graphics Cards are fitted out with the iconic Vapor-X Cooling. The Vapor Chamber is mounted in contact with the surface of the GPU and GDDR6 Memory. The Vapor-X cooler is fine-tuned to work with the other cooling components such as the fins, heatpipes and fans to bring the best efficiency to cool the GPU and components. Since the entire area transfers heat at the same rate, the Vapor-X module is engineered to work more efficiently than a copper heat sink at carrying away heat.

Upon gaining heat, the heat source is pushed to the Vaporization Wicks to begin the heat dissipation process. Due to extreme low pressure, working fluid and pure water are easily vaporized and moved through the vacuum until it reaches the Condensing Wick which is adjacent to the cooled surface. At this point, the vapor turns back to a liquid state whereby the liquid is then absorbed by the Transportation Wick by capillary action and moved back towards the Vaporization Wick. A recycled liquid system occurs when the heat source reheats the liquid and it becomes re-vaporized by the Vaporization Wick to restart the Vapor-X Cooling process. The Optimized Composite Heatpipes work in tandem with Vapor-X Cooling, fine-tuned for the cooling design, with optimal heat flow to efficiently and evenly spread out the heat to the entire cooling module. 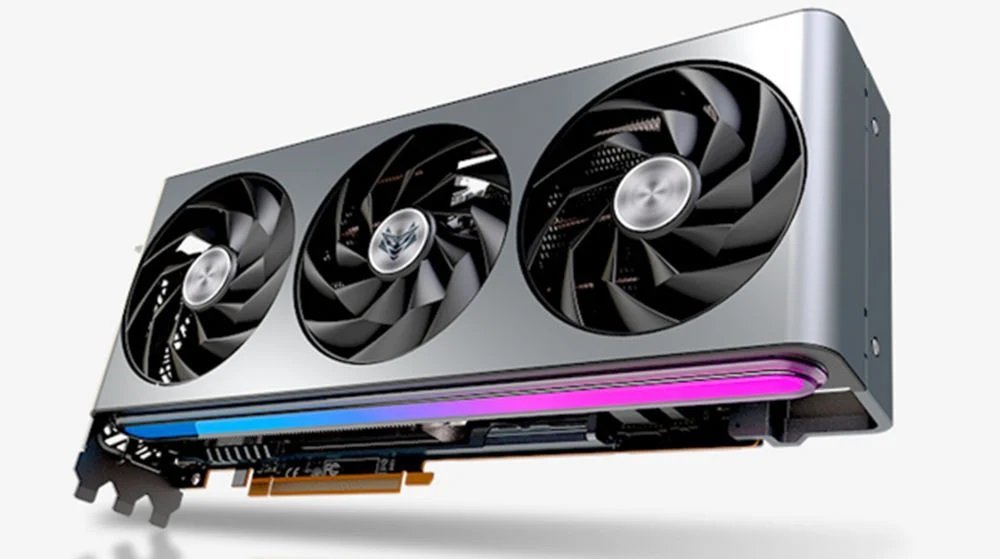 NITRO+ Features to Maximize Your GPU
The NITRO+ AMD Radeon RX 7900 Series Vapor-X Graphics Cards are constructed with a die casted aluminium-magnesium alloy frame that strengthens the structural stiffness of the shroud and ensures durability whilst enveloping the sides of the PCB. Located on top of the frame is the Frontplate Heatsink which overlays the entire PCB to cool the VRM components as a dedicated VRM cooling module to create optimal heat dissipation for peak airflow and cooling performance.

The renowned and robust Tri-X Cooling Technology works in tandem with the Wave Fin Design to diminish friction and airflow which reduces noise, and the V Shape Fin Design for GPU Cooling to quicken and centralize airflow around the GPU to dissipate heat efficiently.

The GPU is mounted onto the High TG Copper PCB. Constructed of 14 layers of high-density 2oz copper PCB with a high TG [Glass Transition] temperature value PCB to match the power requirements of the GPU and memory and guarantee mechanical stability of the PCB during operation. The board design uses premium and efficient compact Ultra High Performance Conductive Polymer aluminium Capacitors which fully enables the 20-phase power design of the PCB. 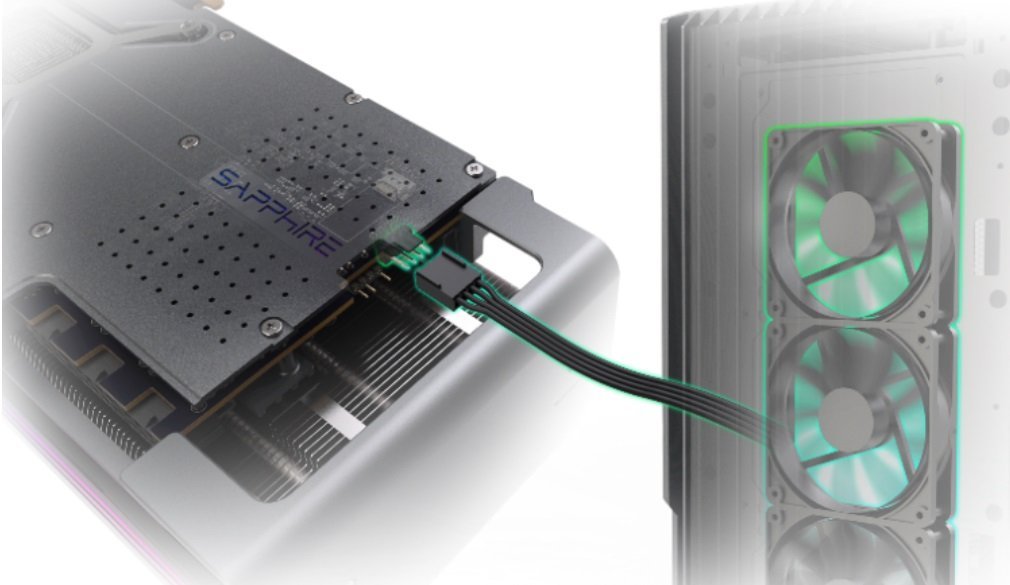 NEW Assistive System Fan Control
When the temperature of the GPU rises, the fans on the graphics card speed up accordingly. To aid in rapid cooling and heat dissipation, the new Assistive System Fan Control feature controls the speed of a system fan to automatically increase at the same time as the graphics card fans to assist in expelling hot air from the entire system faster.

Classic NITRO+ Favourite Features
Experience classic NITRO+ features like the fan-favourite Quick Connect Fan with just one screw holding the fan securely in place to easily remove, clean or replace the fan. Fans feature Dual Ball Bearing for up to 85% longer lifespan than sleeve bearing fans and for up to 10% less noise through fan blade improvements. Switch between Performance Mode to Silent Mode or back using our Dual BIOS feature and enable TriXX to switch easily between modes using the TriXX Software BIOS Switch. The high-quality aluminium Metal Backplate protects the components on the backside of the PCB and helps remove heat.

NITRO+ Aesthetics
For the ultimate customization, NITRO Glow enables gamers to personalize their battlestation aesthetic. The NITRO+ AMD Radeon RX 7900 Vapor-X Series Graphics Cards take it the next step further with the Dual ARGB Light Bar. Customize both the dual light bar and the ARGB Backplate to cultivate an exceptional and beautiful ambiance for your gaming setup.

The NITRO+ AMD Radeon RX 7900 Vapor-X Series Graphics Cards is bundled with a Graphics Card Supporter to keep the graphics card in place on the PCIe Slot. Gamers can also find the optional ARGB Extension Cable to synchronize the NITRO+ Graphics Card with other ARGB components within the PC system.