Razer is easily one of the few brands in the market that offers thin-and-light gaming laptops with high-end specifications under its hood. Razer recently introduced an updated version of its Razer Blade 14 gaming laptop, featuring the latest AMD Ryzen 6000 series APU and NVIDIA’s fastest 3000 series mobile GPUs. Here are our thoughts about the new model.

While many gaming laptops are designed with aggressive styling, the new Razer Blade 14 features a very clean and minimalistic design. Razer claims that the Blade 14 is currently the smallest 14-inch gaming laptop with a thickness of just 16.8mm. The outer shell is made of CNC aluminum with an anodized finish and the laptop weighs about 1.78kg. The 14-inch IPS display offers excellent viewing angles and features a screen resolution of 2560 x 1440. The QHD screen also offers a fast refresh rate of 165Hz with support for AMD FreeSync Premium. And when it comes to colors, the display has support for 100% DCI-P3 and each display manufactured is individually calibrated. The whites on the display are a bit on the cool side. On the workspace side of things, the laptop comes with the Razer Chroma N-key rollover keyboard with RGB support for every individual key. Despite being a gaming laptop, the keyboard offers a pleasant typing experience like any other premium ultrabook. The precision glass touchpad has enough real estate to scroll through web pages. And there are two front-firing stereo speakers located on either side of the keyboard. This should give a louder and clearer audio experience as compared to other gaming laptops that have their speakers located on the bottom. The palm rest portion is comfortable to use while gaming or typing. The outer lid portion has the LED-backed Razer logo. On the rear side of the laptop, there are air intakes on the edge for better cooling. 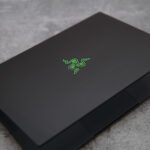 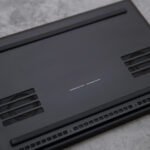 There is also a 1080p IR HD camera above the main display with support for Windows Hello. Razer has shown its commitment to being carbon neutral with its #GoGreenWithRazer initiative. The packaging of the Razer Blade 14 consists of biodegradable airbags, recyclable boxes, and the use of Soy Ink on its paper and manuals. The latest 2022 edition of the Razer Blade 14 comes with some serious firepower for a laptop of this caliber and design. The APU used here is none other than the Rembrandt-based 8-core AMD Ryzen 9 6900HX with speeds that reach up to 4.9GHz clocks. The iGPU of the chip is the RDNA2 based 680M, making the jump from the old Vega graphics. The processor is backed by 16GB of DDR5 RAM with speeds clocked at 4800 MHz and set in the quad-channel configuration.

What’s more interesting is that Razer managed to integrate the GeForce RTX 3080 Ti, NVIDIA’s fastest single-GPU to date for gaming laptops. The RTX 3080 Ti features a total of 7424 CUDA cores and 16GB GDDR6 VRAM with a 256-bit memory interface. However, we noticed that the speeds are a bit downgraded as compared to the official clock speed figures from NVIDIA. The RTX 3080 Ti on the 2022 Razer Blade 14 has a maximum clock speed of 1260 MHz as compared to the 1590MHz original clock speeds, along with the maximum power draw set at 100W as compared to the 150W original figures. The downgrades are most likely to solve throttling issues since the Razer Blade 14 is designed to be a thin gaming notebook and the chassis does not have enough room for aggressive cooling. We used the 30.0.15.1295 NVIDIA driver to run the benchmarks at the time of testing. Our review unit came with the 1TB PCIe 4.0 SSD from Samsung (MZVL21T0HCLR-00B00) with Windows 11 Home edition preinstalled. From our CrystakDiskMark test, we got blazing fast read speeds of 6733MB/s and write speeds of 4932 MB/s. 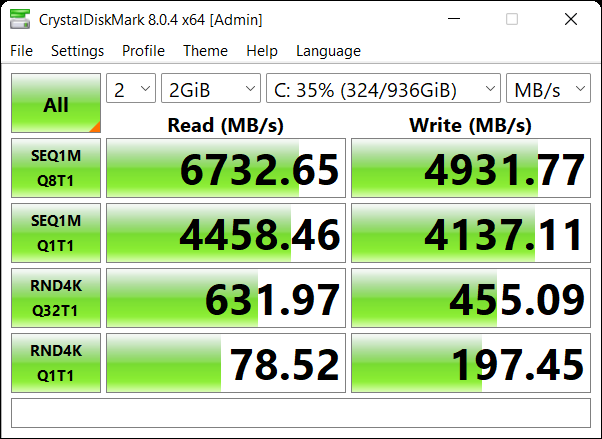 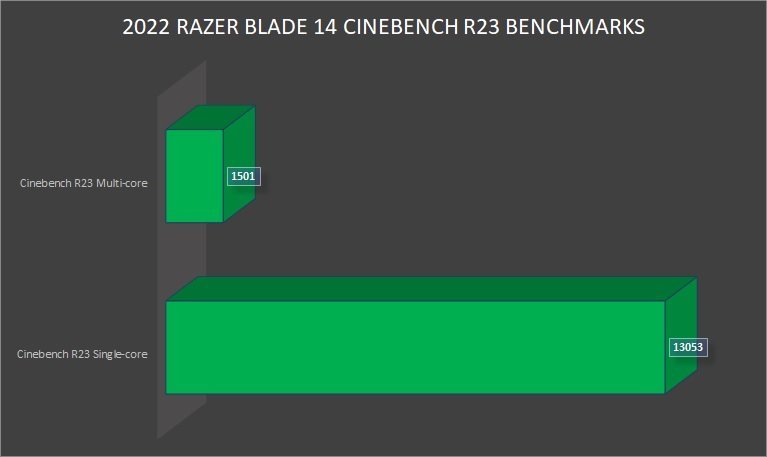 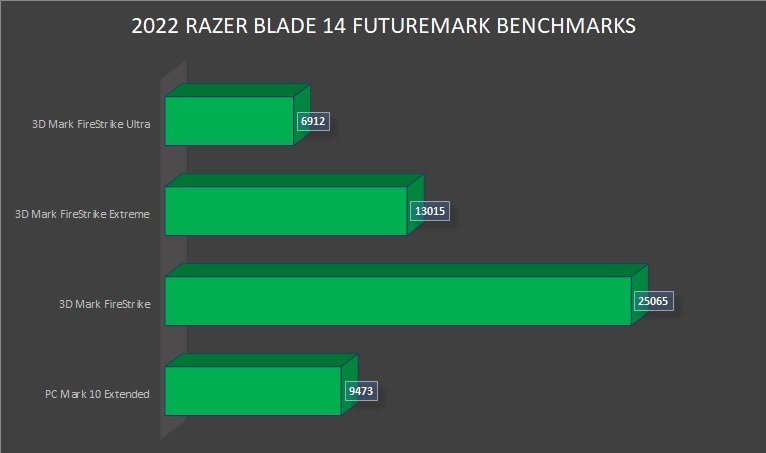 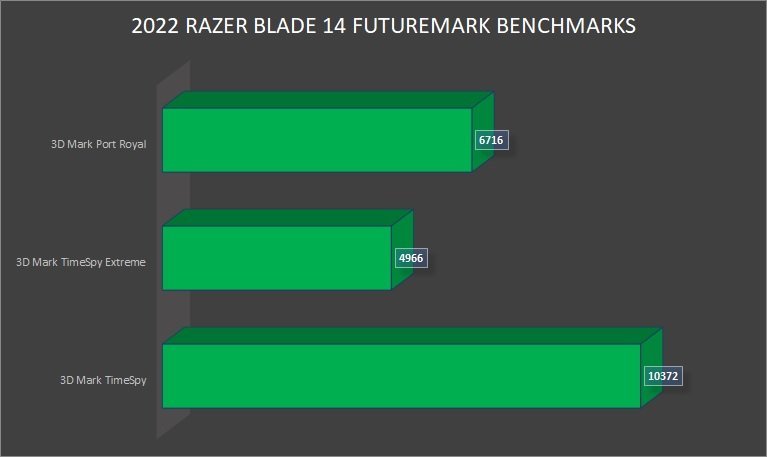 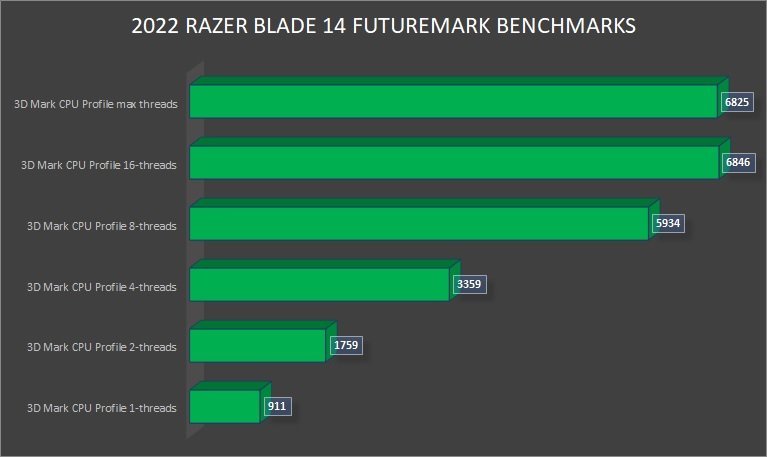 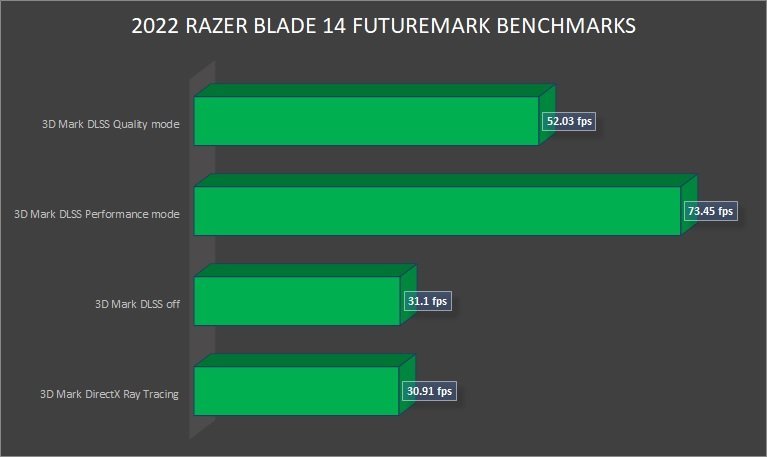 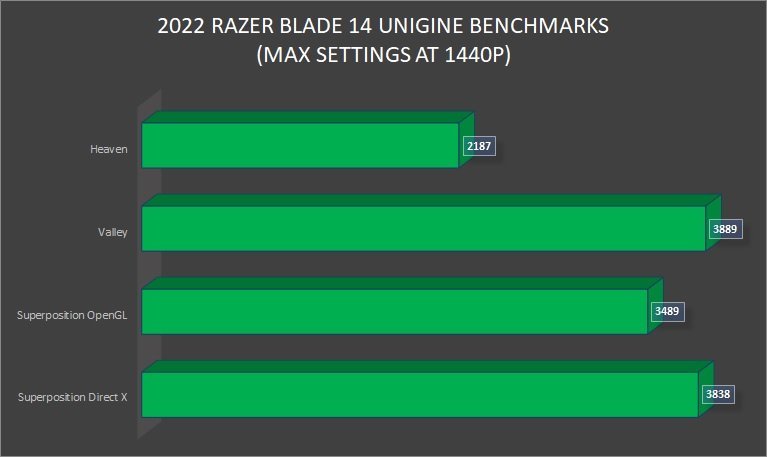 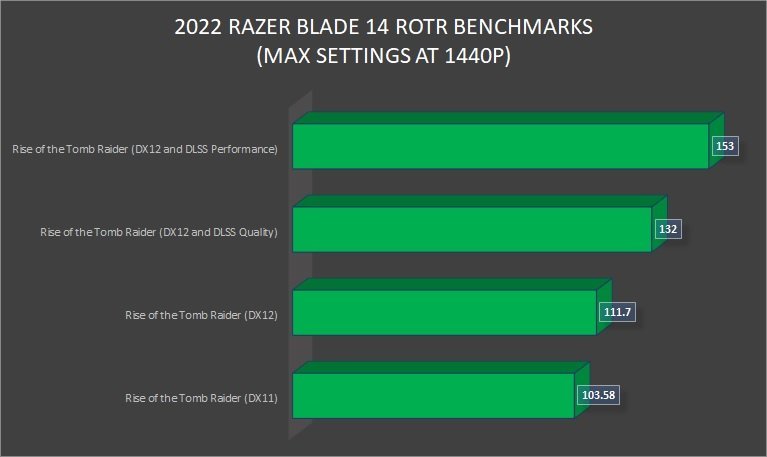 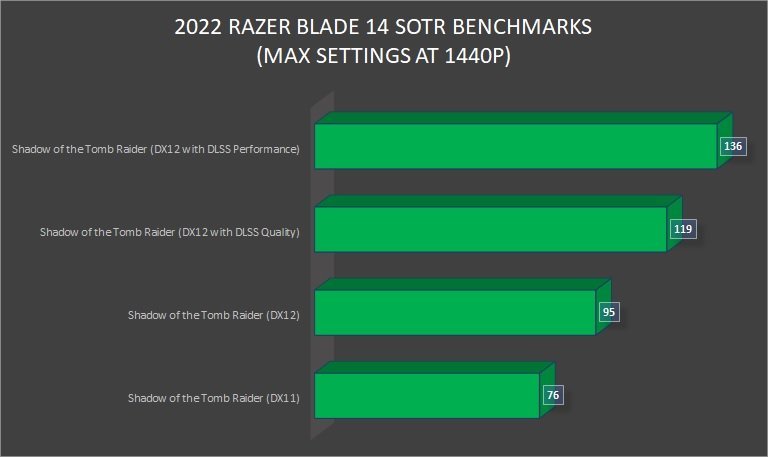 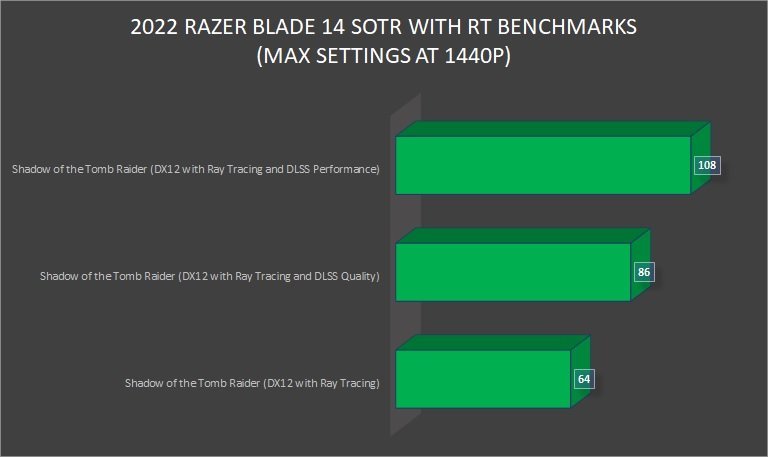 While the laptop performed very well at 1440p resolution, hitting the 165fps mark to utilize the 165Hz refresh rate may be a tough task for the RTX 3080 Ti, if you are using the maximum settings and adding ray-tracing into the mix. And this differs for different games. Lowering the settings and resolution and activating DLSS Ultra Performance is your best bet to hit the 165fps mark.

As for the battery life, the 2022 Razer Blade 14 houses a 61.6 WHr lithium-ion battery and the package comes with a 230W power adapter. While the laptop features a high-end GPU, you can trigger the NVIDIA Optimus feature that switches to the iGPU for better battery performance. We tested the laptop using the battery test feature of PC Mark 10 Extended – with and without Optimus activated. In normal laptop mode (with RTX 3080Ti in use), the machine was able to last for about two hours and 14 minutes. And when switching to NVIDIA Optimus mode, the battery life significantly improved to 5 hours and 18 minutes.

If you are looking for a powerful gaming laptop that features a thin form factor and packs the latest chipsets that handle demanding games and workloads, then we recommend the 2022 Razer Blade 14 with RTX 3080 Ti GPU. The laptop comes with a chassis made of CNC aluminum with an anodized finish. The 14-inch 1440p IPS display features a fast refresh rate of 165Hz with support for FreeSync Premium. The laptop features a great Razer Chroma keyboard with N-key rollover and the glass trackpad has enough room to move around. The laptop also features front-facing stereo speakers. There are enough connectivity options, including dual USB Type-A and USB Type-C ports, and one HDMI 2.1 port. The laptop packs the latest Ryzen 9 6900HX APU with RNDA2-based integrated graphics, along with 16GB of fast DDR5 memory, PCIe 4.0 SSD for fast file transfers, and the powerful NVIDIA GeForce RTX 3080 Ti GPU with 16GB GDDR6 VRAM. The laptop performs well for many games and using DLSS amplifies the performance further. The battery life is also decent and using NVIDIA Optimus mode helps to keep the battery going on for almost a day of use.