As HP takes over the HyperX gaming brand, Kingston continues to manufacture performance-based memory products. We got to play with the new Kingston FURY Renegade DDR4 RGB memory and here are our thoughts about it.

With HyperX out of the equation, Kingston has introduced a new gaming brand called the FURY series with three different memory products: FURY Renegade, FURY Beast, and the FURY Impact. While the Beast looks a lot similar to the old HyperX Fury memory products, the Renegade comes with newly designed heat spreaders that are also larger in size. Adding to the mean looks of the black heat spreaders is also the inclusion of the same black color on the PCB. The RGB LED located on the top, is backed with the patented Kingston Fury Infrared Sync Technology that keeps the RGB color effects in sync with the app that you use. The RGB effects can be controlled using the Kingston CTRL software or other manufacturer apps such as ASUS Aura Sync, MSI Mystic Light Sync, Gigabyte RGB Fusion 2.0, and more.

The Kingston FURY Renegade DDR4 comes in several versions with speeds reaching up to 4600 MHz. We got the 3600MHz versions of the FURY Renegade RGB memory. Kingston had sent us a single-module model with 32GB onboard, and another model with two 16GB modules. The memory runs at default 1.35V when the clocks are set at 3600 MHz and the memory timings are 16-20-20. 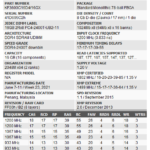 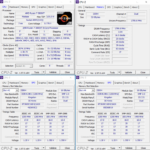 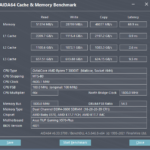 The new Renegade is tuned to work on both Intel and AMD platforms and our testbed features the ASUS X570-PLUS TUF GAMING motherboard and the Zen 2 based AMD Ryzen 3800XT processor. We installed Windows 10 Pro on a Kingston 1TB KC2500 SSD and some of the games were also stored on a 2TB Samsung 860 EVO SSD. Our testbed also has an XFX Radeon 5700 XT THICC II GPU and the XFX XTI 1000W PSU, both provided by XFX Middle East. We also used the Corsair iCUE H100i RGB PRO XT AIO for cooling the CPU. 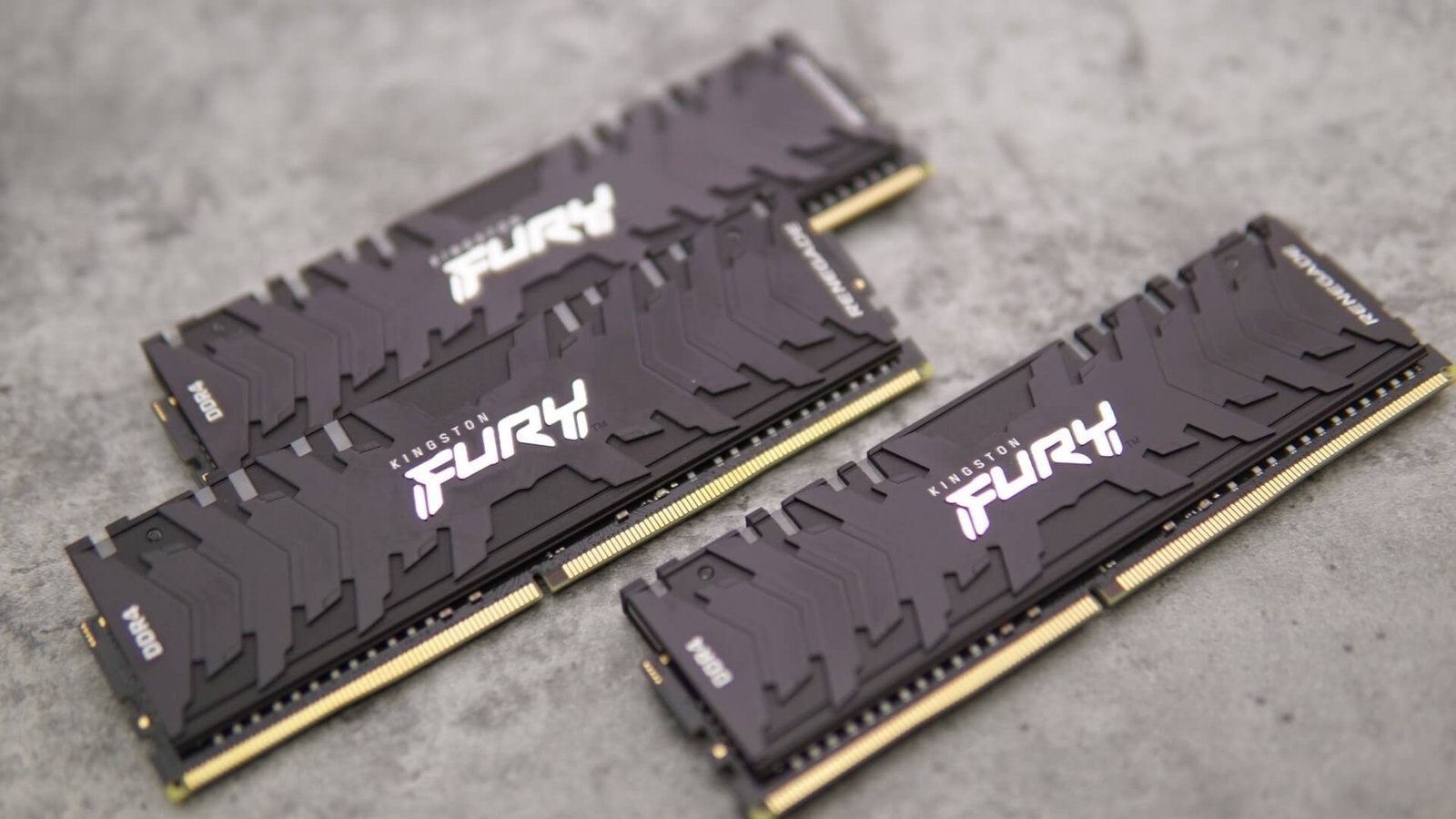 Using high-speed memory products is vital for Ryzen based builds and the 3600MHz is considered to be the sweet spot for good gaming performance. We chose the 3600 MHz DOCP option on the BIOS of the motherboard. The Infinity Fabric (FCLK) speeds and the memory controller clock (UCLK) speeds were also automatically set to 1800 MHz. The latency is set at CL16, although, you could do tighter memory timings with the help of the Ryzen Calculator app. However, we chose to stick with the default DOCP profiles for now. We also left the CPU clocks at default speeds with no overclocking and with SMT enabled.

We tested both the single module and the dual-module versions of Renegade RGB at 3600MHz and also some tests with 2400 MHz. For theoretical results, we used Futuremark tests such as FireStrike and TimeSpy, and Unigine tests such as Heaven, Valley, and Superposition benchmarks. We also did CPU benchmarks using Cinebench R23. We also tested some games in both 1080p and 2K resolutions. 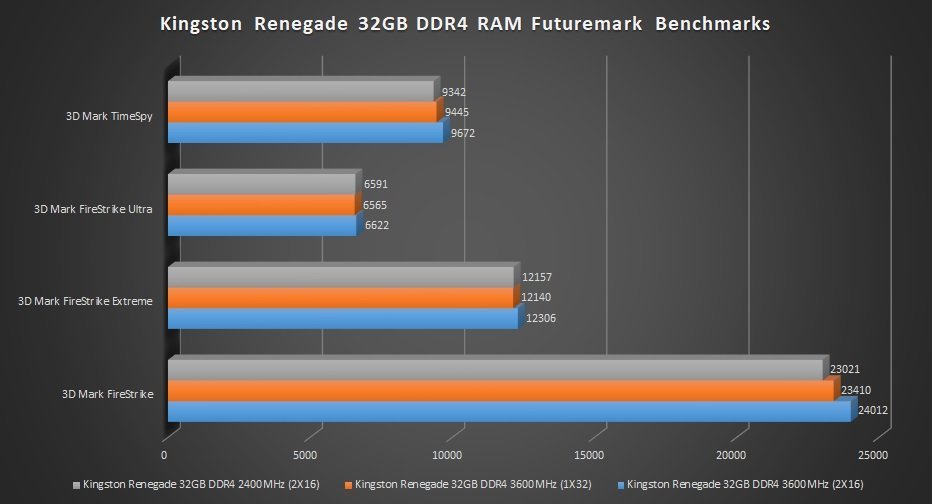 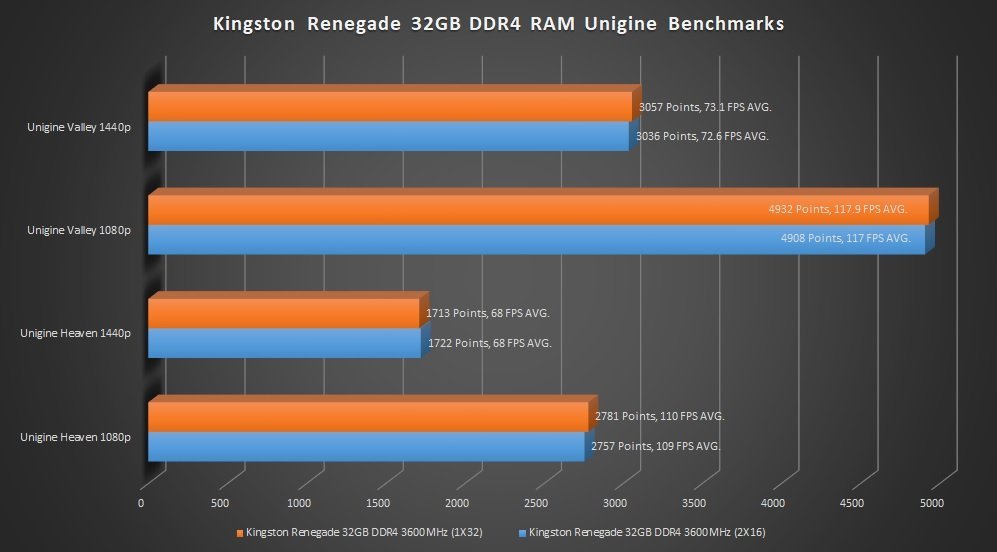 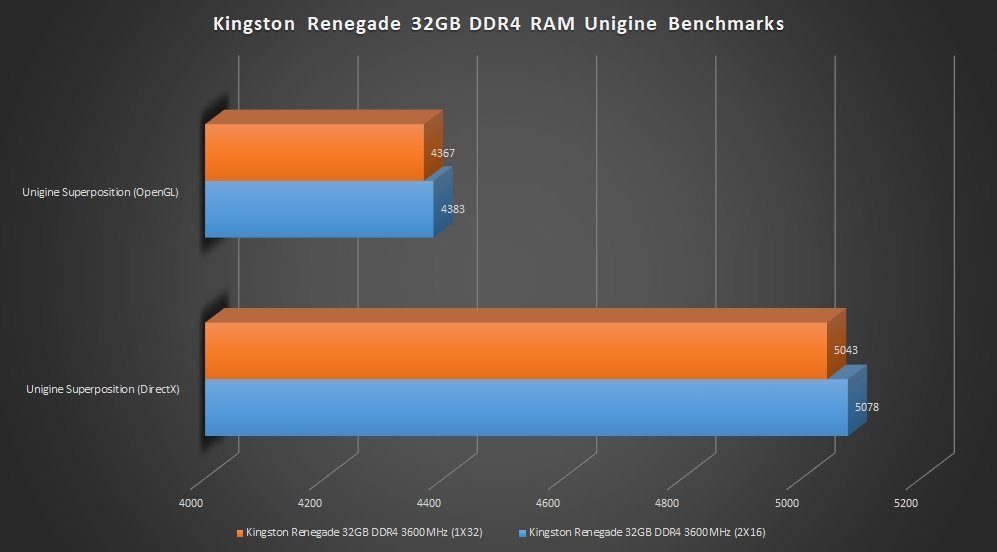 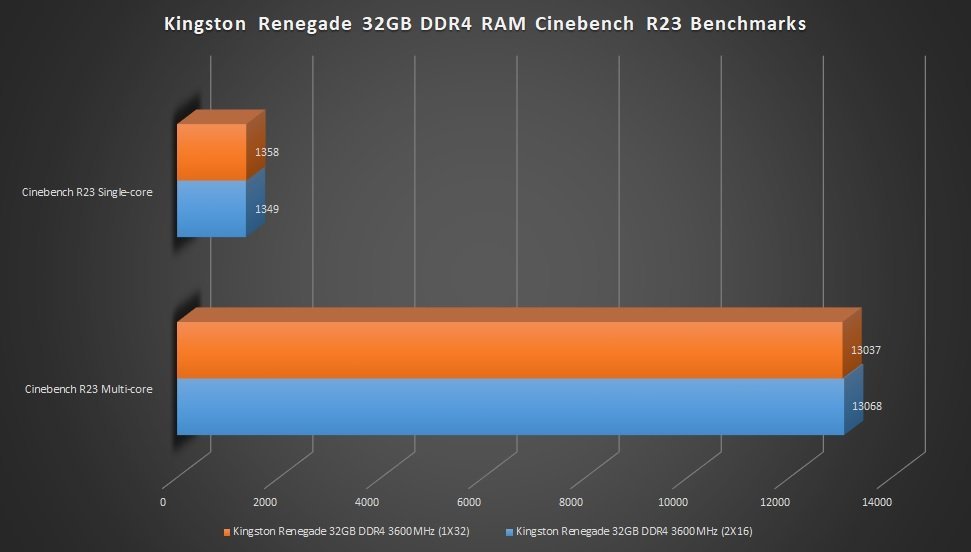 From our Futuremark-based tests, the Renegade DDR4 with dual 16GB modules at 3600MHz is faster than the single module 32GB DDR4 at the same speeds. But when it comes to Heaven and Valley tests at both 1080p and 2K resolutions, the 32GB single-stick Renegade has the edge in performance by a small margin. However, the dual-module version once again shows faster results for the Superposition benchmark. And in the case of CineBench R23 tests, the dual-module 32GB Renegade outperforms the single module version for multi-core tests. But for single-core tests, the single-module memory takes the lead. 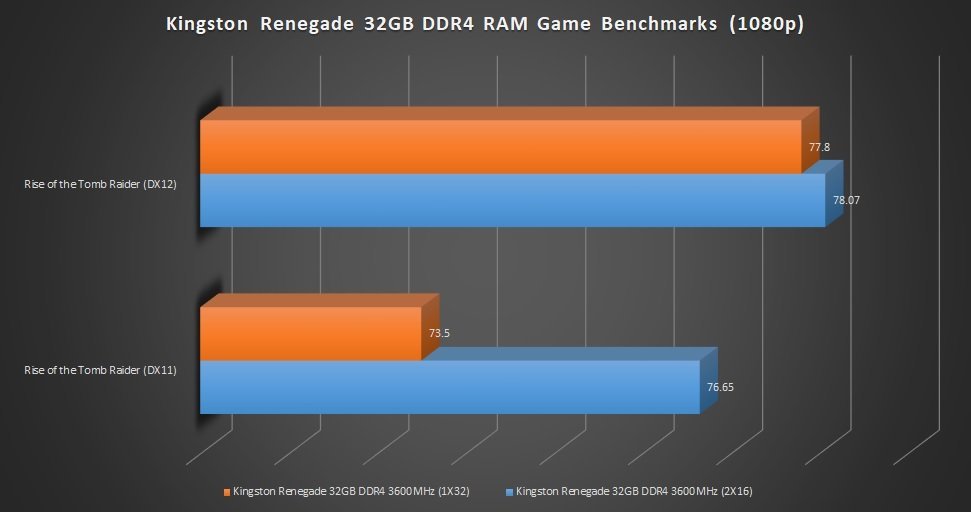 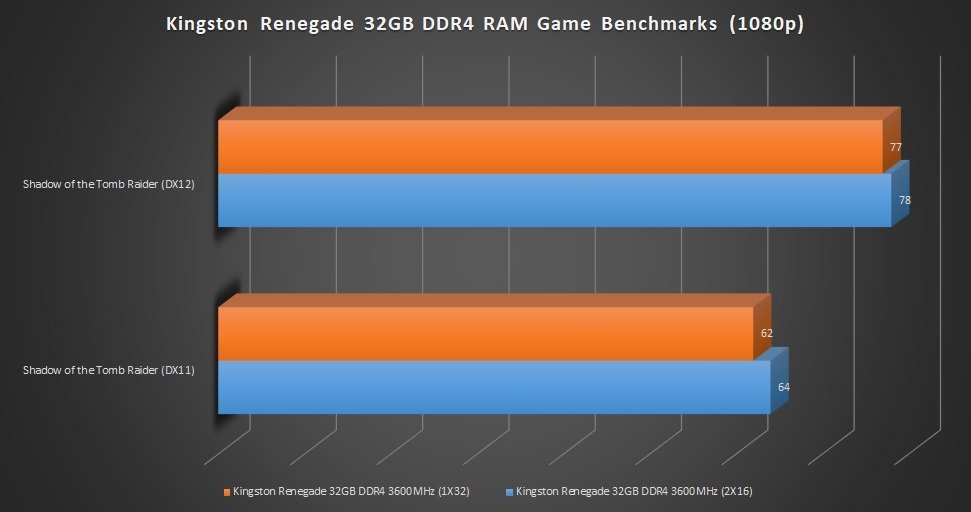 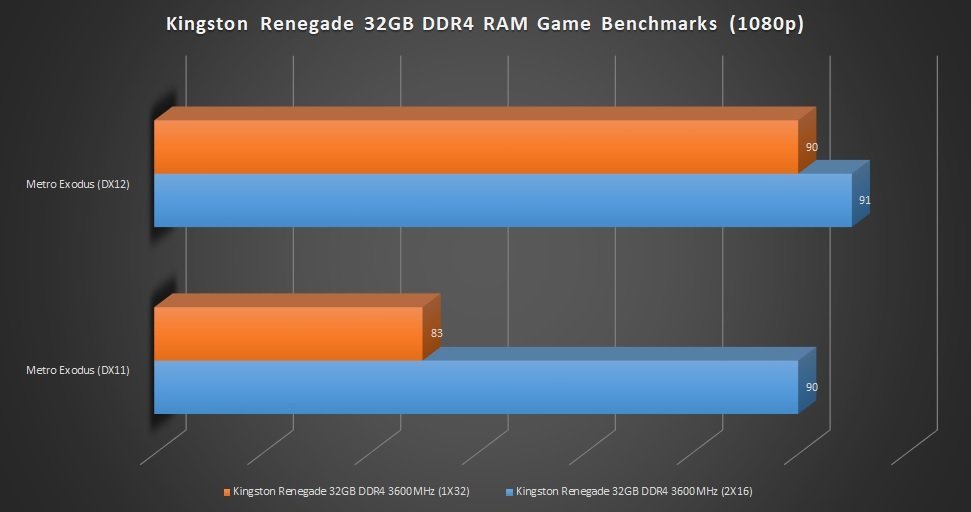 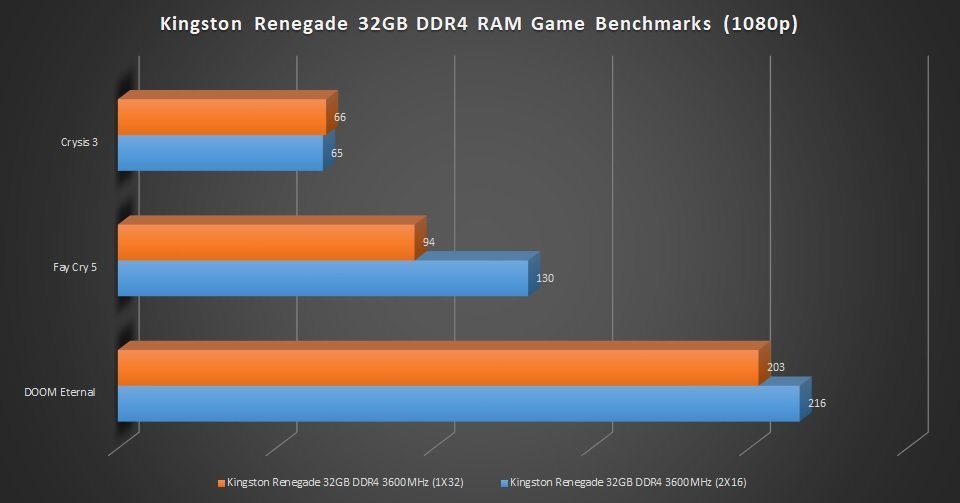 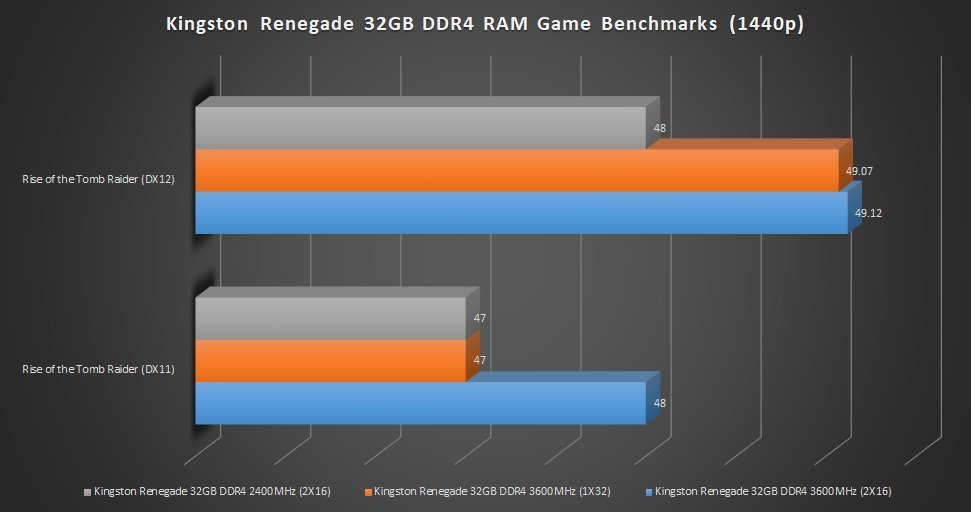 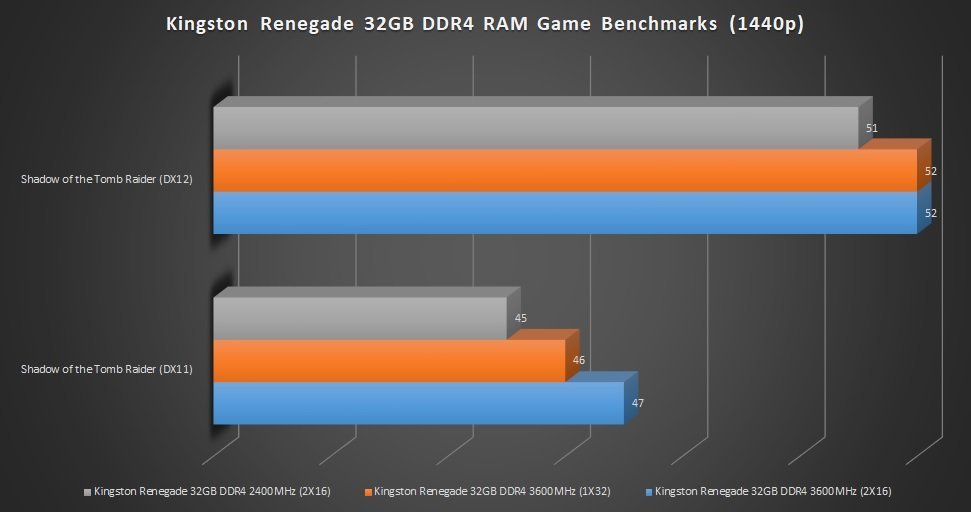 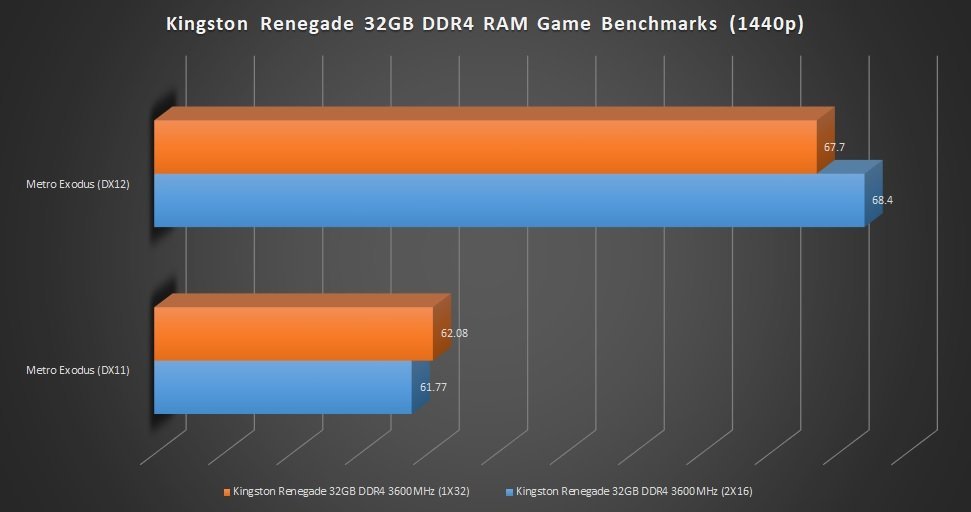 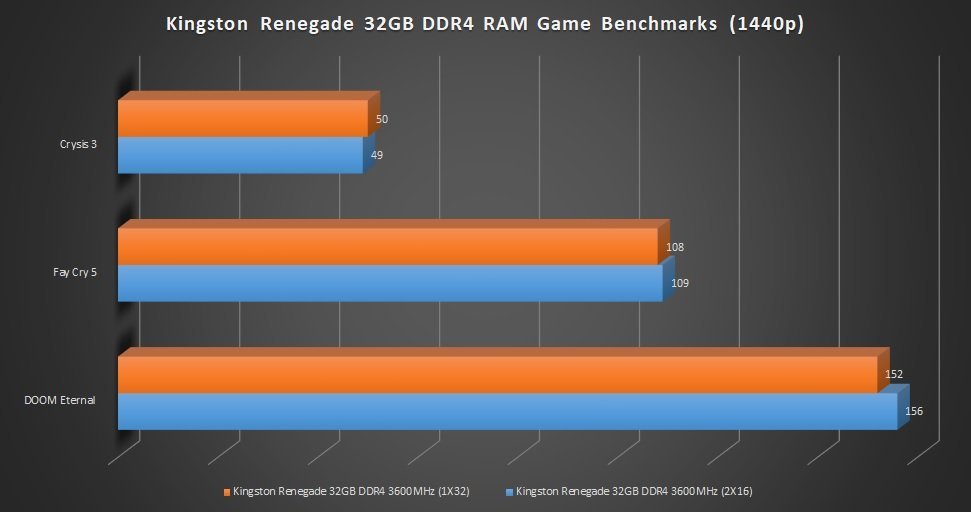 With the introduction of the new FURY series memory products, the Renegade RGB DDR4 RAM not only features an aggressive and stylish design but also has the hardware to deliver great performance boosts for your PC build. The black heat spreaders and the black PCB has a mean look that means business and will suit any gaming PC build. The Kingston Fury Infrared Sync system ensures that RGB effects are properly synced and is compatible with most of the popular RGB managing applications. 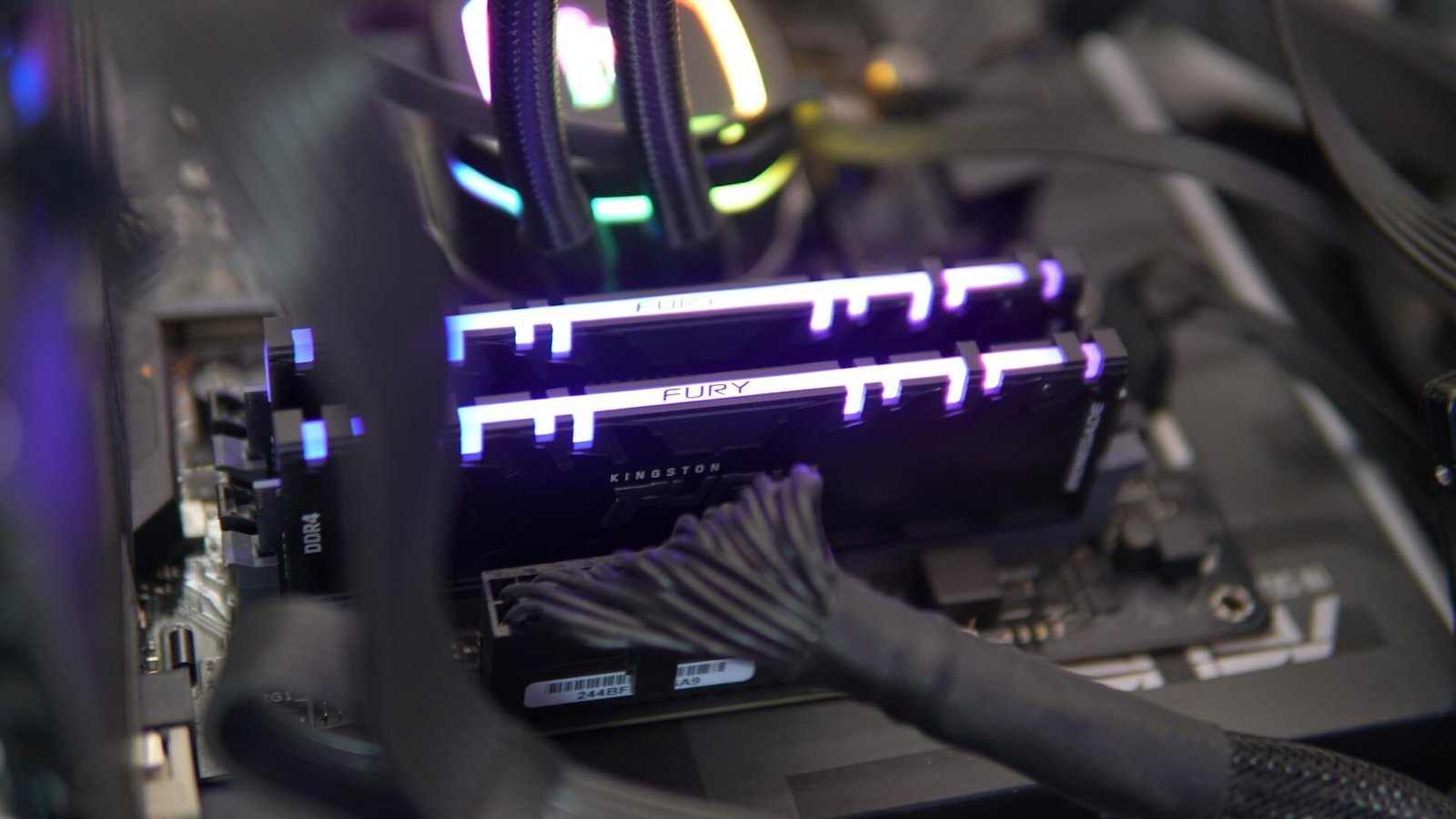 The 3600 MHz speed profile is something that is suitable for both Intel and AMD motherboards, especially for the latter. And for those who have Zen 2 or Zen 3 based builds, the Infinity Fabric can be set at 1800 MHz for maximum performance and lower latencies. The performance difference between the single module and dual-module versions depends on the application that you use or the game that you play, and either one is capable of delivering great gaming performances. The Kingston 32GB FURY Renegade DDR4 RGB Memory (3600 MHz) is a good choice for those looking to upgrade their systems or are planning to build a new gaming rig.