ASUS offers some of the best high-performance gaming laptops in the market with hardware that can offer similar performances as desktop counterparts. We take a look at the new and powerful ASUS ROG Zephyrus S17 GX703HS gaming laptop. The ASUS Zephyrus series of laptops have always come with unique designs that aren’t offered by other gaming brands in the market. The new ROG Zephyrus S17 features an impressive 17.3-inch IPS display with a native screen resolution of 2560 x 1440. The IPS panel has great viewing angles and also comes with an anti-glare coating.

One of the selling points of the display is the 165Hz native refresh rate, offering gamers super-smooth gaming visuals, along with a low response time of 3ms that should help gamers take the vital shot without delays while they play online multiplayer sessions. The high refresh rate is supported with G-Sync and Advanced Optimus that helps to keep the visuals smooth while maintaining battery life. The screen also features cinema-grade 100% DCI-P3 color gamut and is Pantone Validated for life-like gaming visuals and accurate colors for content creation.

The thin bezels of the display and the 88% screen-to-body ratio give more real screen estate to see more content. The laptop is made of an all-metal chassis with magnesium and aluminum. We love the way how ASUS has implemented the diamond cuts on the edges of the laptop. The device features an impressive 19.9mm ultra-thin form-factor and weighs 2.6 kg.

The lid of the laptop features the ROG insignia with reflective coatings on the right side along with a stylish Dot Insight pattern made of laser-polished accents that goes well with the black color of the laptop. You can also see the “Republic of Gamers” phrase on the lid. It would have been great if the ROG logo was backed with RGB illumination. That said, the keyboard on the ROG Zephyrus S17 GX703HS does feature support for ASUS AURA Sync and also per-key RGB customizations. For maximum response, the keyboard holds optical key switches that help for fast-paced games. The keys feature a travel distance of 1.9mm for great typing experiences and the keycap dish is 0.15mm wide. The glass touchpad of the laptop is 125% larger than the previous generation and features a matte-coated smooth and responsive surface. There is also a dial, which ASUS calls it the Multiwheel, located on the top left side of the keyboard. The wheel can be used to control the volume, display and keyboard backlighting brightness, operating modes, etc. To further enhance the keyboard experience, ASUS has implemented the keyboard lifting mechanism that raises the keyboard to 5° angle. The keyboard automatically lifts up the moment you open the lid of the laptop and it is one of the best parts of the design.

The lifting mechanism isn’t just about enhancing the typing experience. ASUS has placed AAS Plus-based 12mm cooling fans under the keyboard which easily can take in cool air through the gaps. This is a really good idea to take advantage of the space under the keyboard. ASUS also mentions that the laptop also features liquid metal thermal compounds for the best cooling solutions.

There are also air vents under the keyboard portion that is used to expel hot air. Next to those air vents are numerous connectivity ports which include an HDMI 2.0b port, an R45 LAN port, a Type-A USB 3.2 Gen 2 port, a Type-C port with support of Thunderbolt 4 that can be used for DisplayPort 1.4 connectivity, another Type-C port and a 3.5mm audio jack on the left side of the laptop. On the right side, there is a full-sized SD card reader, and two more Type-A USB 3.2 Gen 2 ports. The SD card reader supports data transfer speeds up to 312MB/s, which is ideal for content creators and professionals who would want to copy photos and videos at high speeds. The Thunderbolt 4 port allows gamers to connect the laptop to displays up to 8K resolutions.

ASUS also offers enhanced audio experiences with the ROG Zephyrus S17 GX703HS. There are two tweeters that are located on the top portion of the keyboard to produce higher volume, while the underside of the palm rest features force-canceling woofers that help to balance the acoustics and reduce resonance.

The speakers produced deep bass effects while we played games. There is also a 3D Mic array that optimizes the recording audio with different modes like music, gaming, and meetings. The two-way AI noise-cancellation helps to keep the communication clean during online gaming sessions or meetings. The speakers also have support for Dolby Atmos and Hi-Res Audio for the best sound quality. The ASUS ROG Zephyrus S17 GX703HS isn’t just about the looks and the lights, it’s got the hardware to deliver some impressive gaming performance. The ROG Zephyrus S17 GX703HS comes powered by the 11th generation Core i9-11900H 8-core, 16-thread processor with blazing speeds up to 4.9 GHz, and is paired with 32GB DDR4 RAM at dual-channel configuration. And to support the 2K 165Hz display, the laptop is chipped with the NVIDIA GeForce RTX 3080 Laptop GPU (GA104) that features Samsung-based 16GB GDDR6 RAM and a 256-bit memory bus.

While it may not be the exact equivalent of the desktop counterpart, the Ampere-based RTX 3080 Laptop GPU is currently the fastest that NVIDIA has to offer for gaming laptops and features 6144 CUDA cores. With ROG Boost, the GPU clocks to 1645 MHz speeds at 125W power consumption and can go further to 140W with Dynamic Boost. The GPU also packs the 2nd generation RT cores for ray-tracing and third-generation Tensor cores to aid the DLSS functionality.

The laptop also packs a fast PCIe 4.0 based 2TB Samsung NVMe SSD (MZVL22T0HBLB-00B00) configured as a HyperDrive Ultimate RAID array that can reach speeds up to 10.5GB/s. The 2TB storage provides enough room for gamers to install their favorite game titles. The laptop comes installed with Windows 10 Home OS. ASUS mentions on the product page that users will be able to upgrade to Windows 11 OS for free when available.

The ROG laptop also packs a 90WHr 4S1P 4-cell Li-on battery. To test the performance of the processor, GPU, and SSD, we used some of the best benchmark tools. We used Futuremark CPU Profile, Cinebench R23, and Geekbench 5 for CPU performance, and CrystalDiskMark for SSD speed test. For GPU performance, we used FireStrike, TimeSpy, and Unigine benchmarks. And for gaming benchmarks, we tested some demanding games such as Rise of the Tomb Raider, Shadow of the Tomb Raider, Metro Exodus, Crysis 3, Far Cry 5, Cyberpunk 2077, DOOM Eternal, and more. We tested the games in 1080p and 2K resolutions at maximum settings, except for few highly demanding titles at lower settings. We also tested the ray tracing performance with and without DLSS functionality. The tests were performed with the Turbo mode of the laptop. 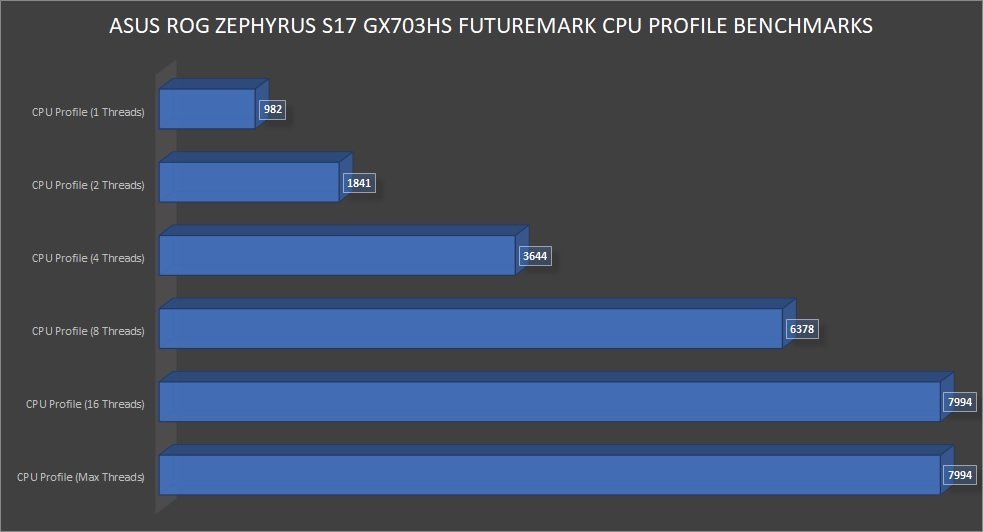 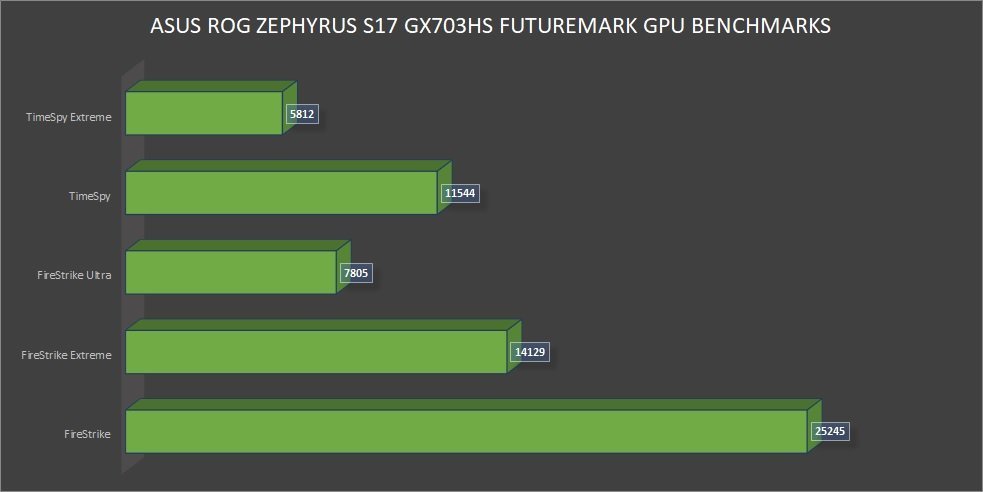 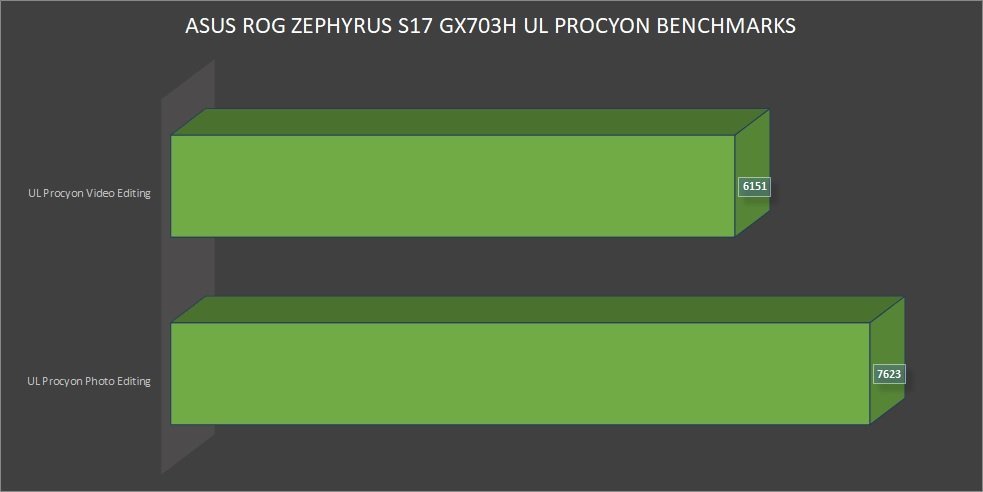 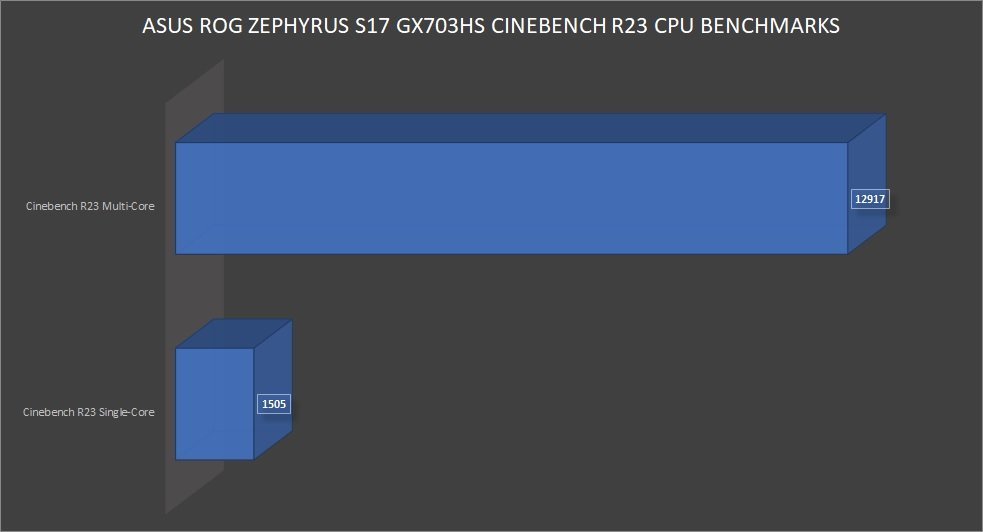 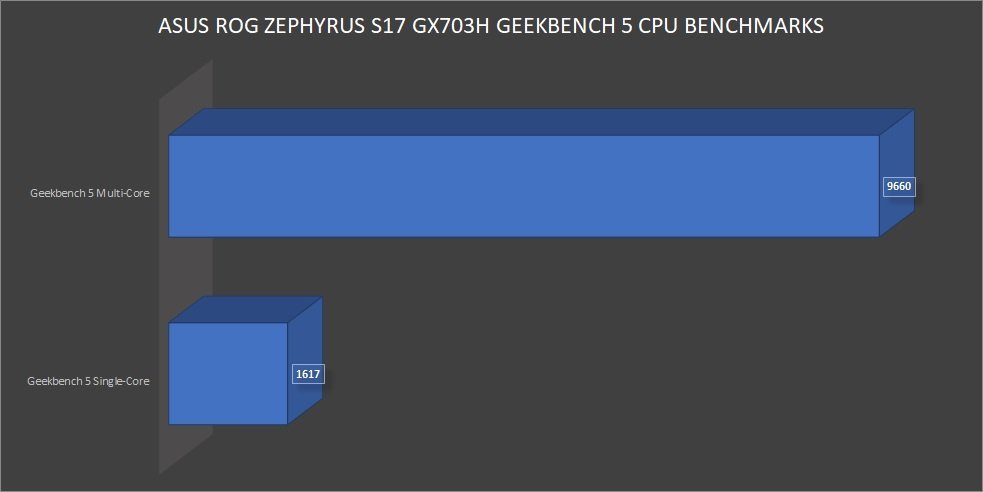 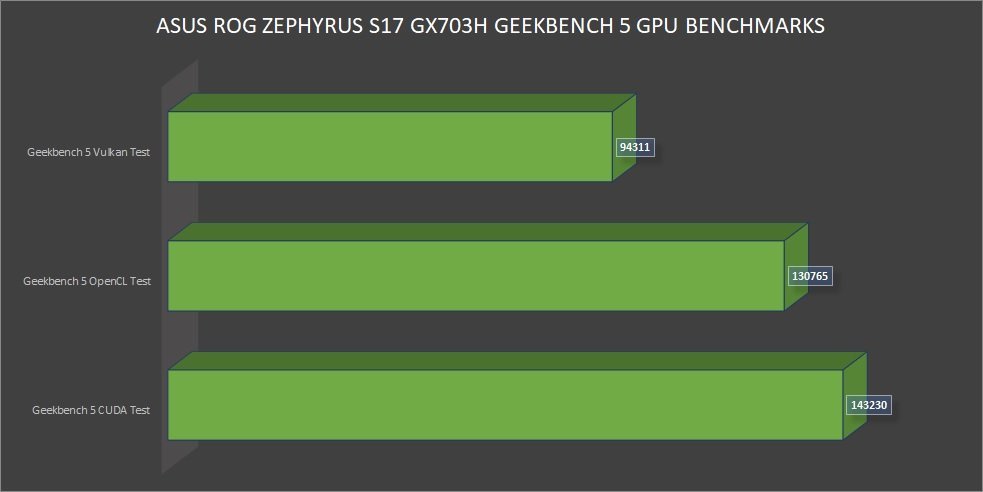 While we achieved impressive scores on the benchmarks above, real-time gaming performance is what really matters. In our gaming tests, the average framerates for both 1080p and 2K resolutions do perform well but it depends on the game title. For example, the SOTR performs at an average of 97fps at 2K resolution and 130fps at 1080p. However, there are some games such as Metro Exodus that performed only at 47fps with 2K resolution and 65fps at 1080p. 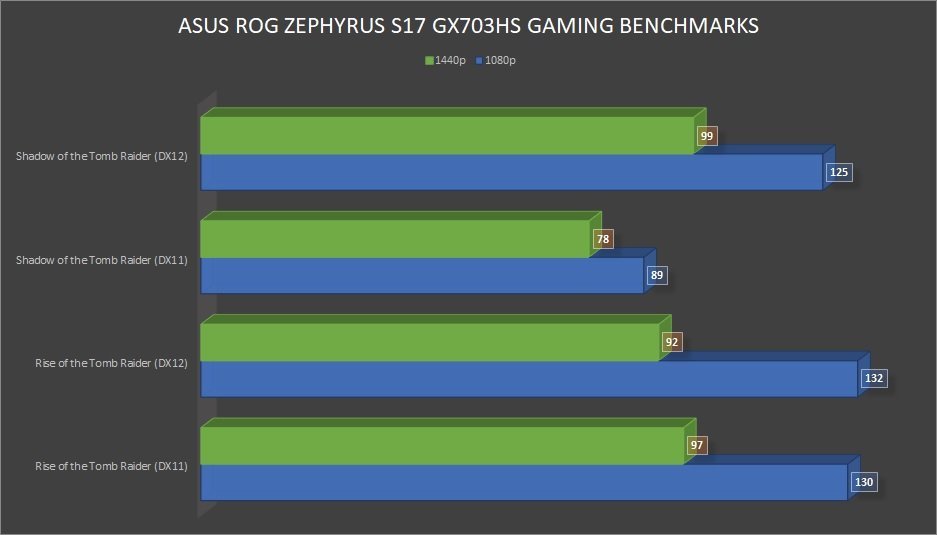 Among our tests, DOOM Eternal was the only game we tried that could hit an average of 186fps at 2K resolution. This matters since the display feature a 165Hz native refresh rate at QHD resolution. Cyberpunk 2077 was the most demanding game we tested that barely reached 42fps at QHD resolution and ultra presets. 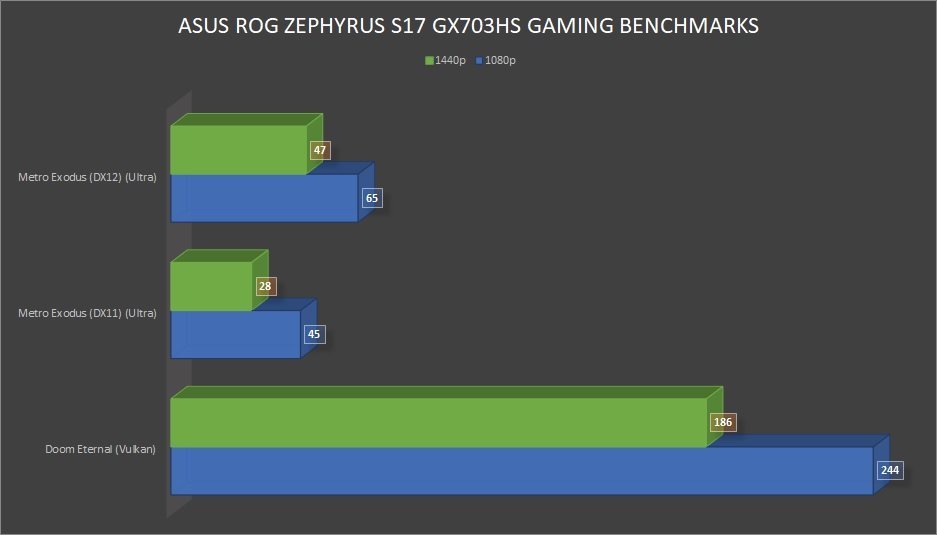 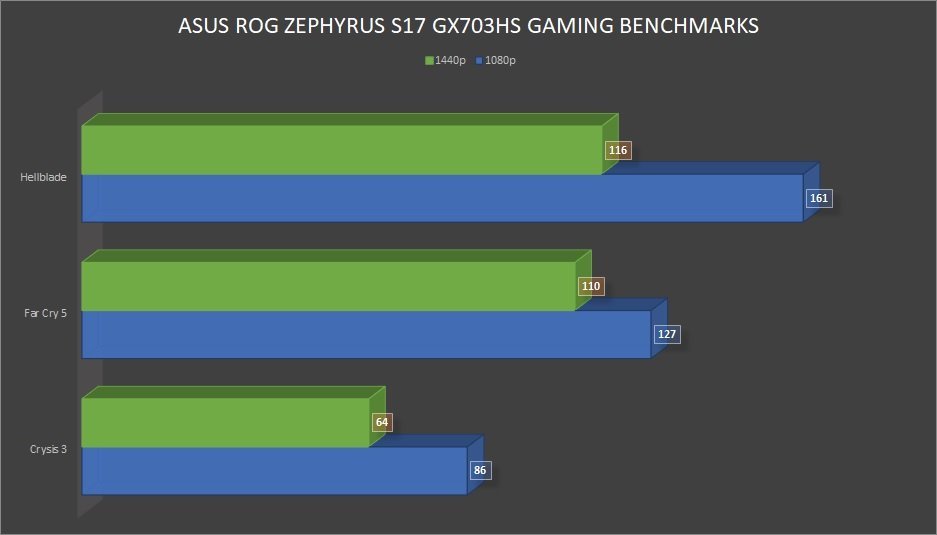 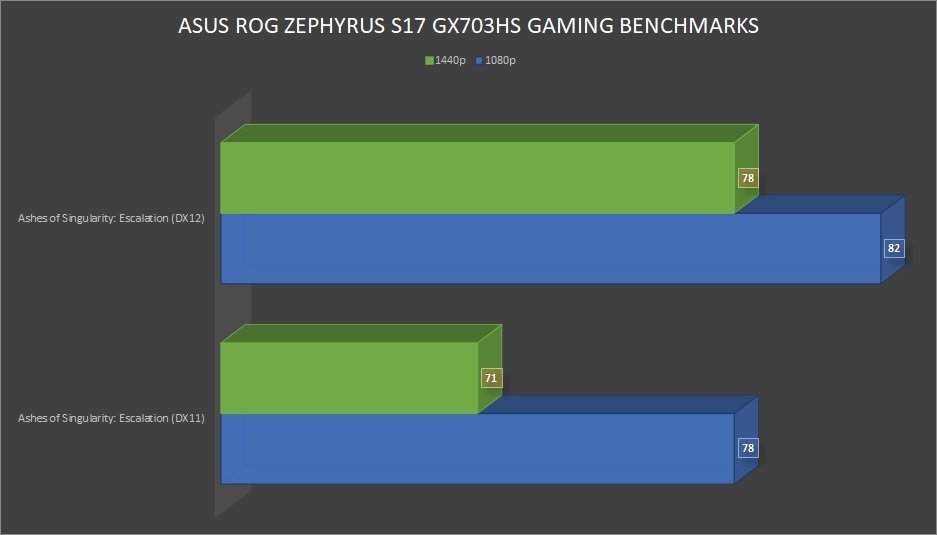 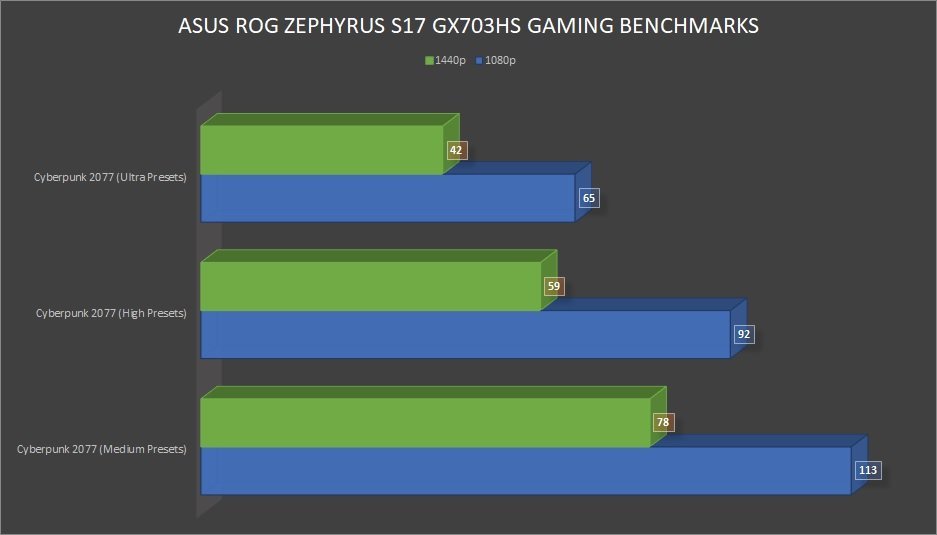 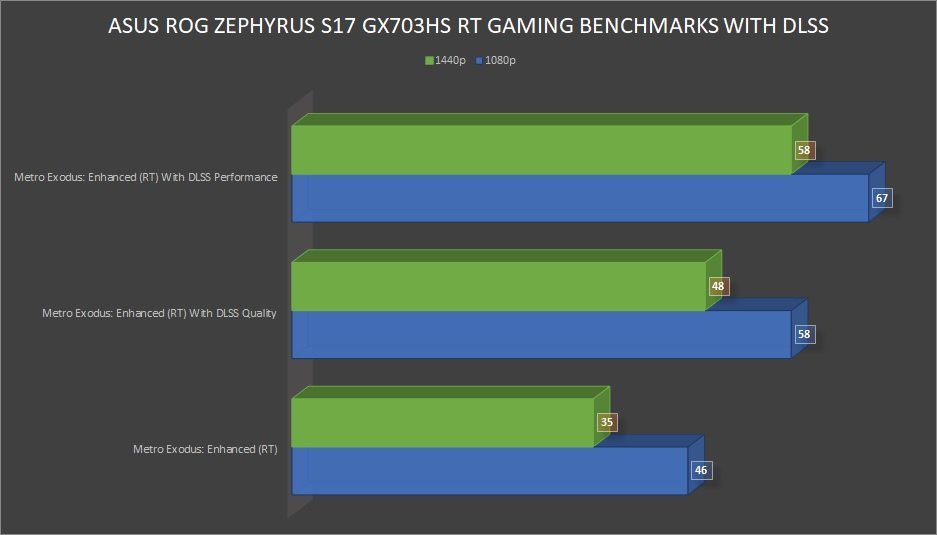 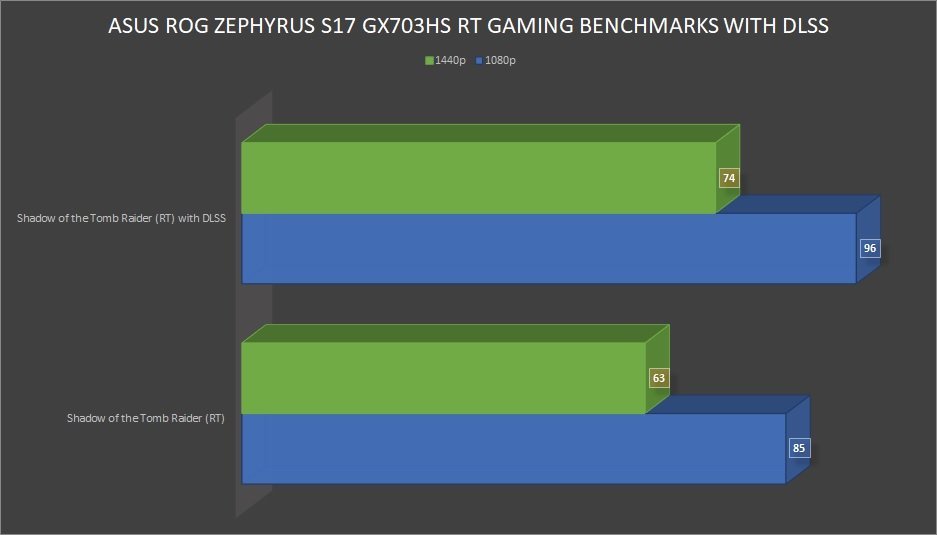 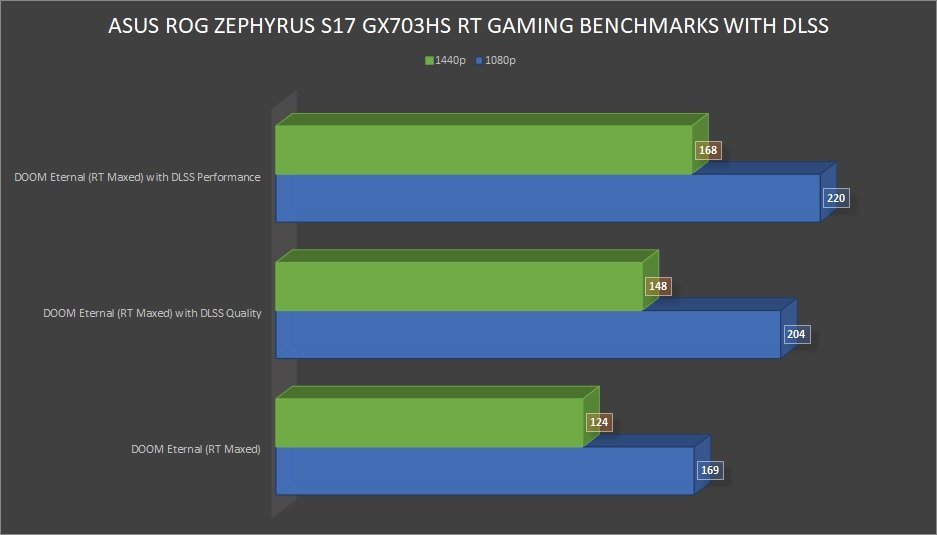 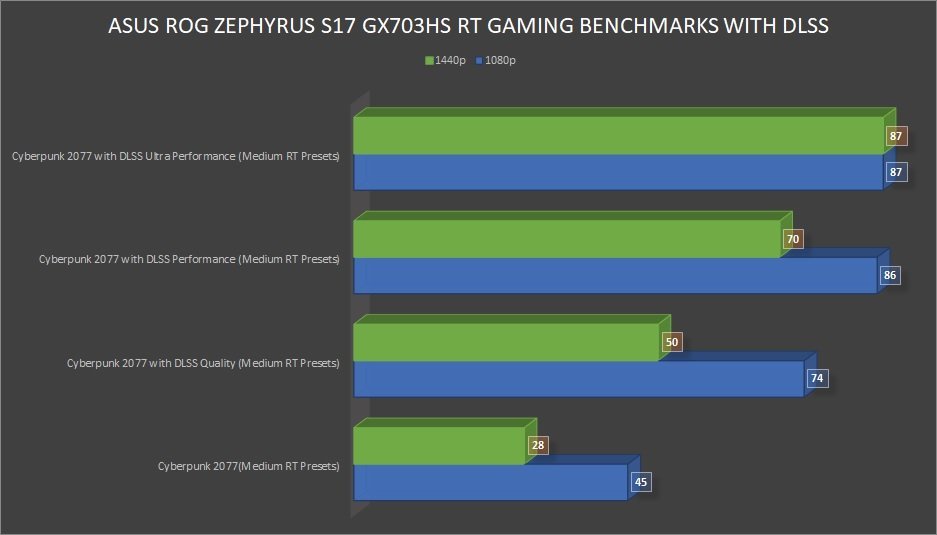 The ROG Zephyrus S17 GX703HS is one of the fastest ASUS gaming laptops that we have tried to date. The gaming laptop features impressive design aesthetics and comes with a lifting keyboard design that not only enhances the keyboard experience but also helps in better cooling that favors better performance. The optical keys are tuned for fast-paced gameplay and each key can be configured with your own lighting colors. The sharp QHD IPS display not only offers great colors but also has a fast refresh rate that reaches 165Hz for super-smooth gameplay. To back up the high refresh rate, the laptop packs the Ampere-based NVIDIA RTX 3080 laptop GPU and the latest Intel 11th generation Core i9 processor for good gaming performance. The laptop also holds a blazing fast 2TB PCIe 4.0 SSD for high-speed file transfers and instant game loads and also is backed with 32GB of DDR4 RAM that is beneficial for both gaming and productive applications.