This anti-glare display is also capable of a blazing-fast 165Hz refresh rate for smooth graphics and gaming, along with support for AMD FreeSync Premium Pro. ASUS mentions that the display has a response time of 3ms. And for all those solid colors, the screen is also 100% DCI-P3 standard. The ScreenPad Plus, which is the secondary display, is a 14-inch IPS panel, and the screen resolution is 3840 x 1100 with support for a stylus. The whole purpose of the ScreenPad is to boost the overall multitasking and productivity for creators, media professionals, and also for gamers. It’s the perfect secondary display for gamers who wants to control their live streams or access the game menu while gaming on the primary display. You will not fall short of connectivity options with this laptop. On the rear side, there is a full-size HDMI 2.1 port, an RJ45 port, and a USB 3.2 Type-A port. This is also good for neat cable management as the user does not need to worry about connecting the HDMI cable to the side of the laptop. Although, I’m surprised that the rear port section does not include the power connector. Speaking of which, the power connection is located on the left side, along with another USB 3.2 Type-A port, a USB 3.2 Type-C port with support for DisplayPort and power delivery, a microSD card reader, and a 3.5mm audio jack. However, the right side only has another USB 3.2 Type-C port. The Zephyrus Duo 16 is designed to efficiently cool the internal components, thanks to its AAS Plus 2.0 cooling system. The air vents on both the left and right sides feature a 28.5mm airflow intake, resulting in 30% more airflow and up to 3dB less fan noise. The exhausts are seen on the rear side and the laptop also has 0dB for ambient cooling. The laptop comes with a full-size  RGB keyboard and the keys have a travel distance of 1.7mm for better typing and gaming experiences. As you can see, the trackpad doubles as a NumberPad and is located vertically on the right side. The NumberPad mode can be activated at any time with the press of a dedicated key. Users will also be able to customize ASUS Aura Sync RGB effects to their liking for each key with ASUS Armoury Crate. For better competitive gaming, the keyboard also offers N-key rollover that basically ensures each key when pressed is independently registered and this matters if you are fast in typing or when trying difficult combos during gaming. In between the ScreenPad and the keyboard portion, there is a gap where ASUS has placed a see-through window of the internal components as a part of the design of the laptop. The see-through window also has its own RGB lighting inside and you will be able to see the words “Republic of Gamers” and “For those who dare”. The outer lid of the laptop features the ROG logo on its right side and a line that cuts through diagonally with the words “Republic of Gamers”. The left half of the lid has a dotted mesh surface that adds to the unique design of the device. The new ROG Zephyrus Duo 16 (2022) GX650 also has air vents on the panel underneath, along with speaker grills. The laptop sports a total of six studio-quality speakers and dual force-canceling woofers, along with support for Dolby Atmos that helps to create a virtual 5.1.2 channel surround soundstage. There are also a total of three mic arrays with two-way AI noise-cancellation for crystal clear voice chat or video calls. ASUS has clearly gone all-out to make the laptop as powerful as possible, and underneath this mammoth of a gaming machine is the best from AMD and NVIDIA. The Zephyrus Duo 16 (2022) GX650 houses the Zen 3-based AMD Ryzen 9 6900HX 8-core processor that is capable of boosting clock speeds up to 4.9GHz. The processor works along with 32GB of DDR5 memory on board with 4800 MHz clock speeds. ASUS mentions that users will be able to upgrade the laptop memory and storage, thanks to the dual SO-DIMM RAM slots and the M.2 SSD slots. The SSD used here is Micron 3400 1TB NVMe PCIe 4.0 SSD (MTFDKBA1T0TFH). The memory and M.2 slots can be accessed with the help of special pop-open screws that pushes the bottom panel of the chassis.

And here comes the main component of the entire package. It’s the NVIDIA GeForce RTX 3080 Ti laptop GPU, capable of delivering the fastest gaming performance on a laptop and featuring 16GB of GDDR6 memory, 518.4GB/s bandwidth, and a 256-bit memory bus. The GA103 chip is capable to hit boost speeds up to 1445 MHz with a power draw of 165W. To test the performance, we used benchmark tools such as Cinebench R23, PC Mark 10, 3D Mark FireStrike/TimeSpy, 3D Mark DLSS/Port Royal, and 3D Mark CPU Profile. For gaming, we tried Rise of the Tomb Raider, Shadow of the Tomb Raider, and Metro: Exodus at 2K resolution, along with tests for ray-tracing modes and DLSS implementation. Check out the scores below. 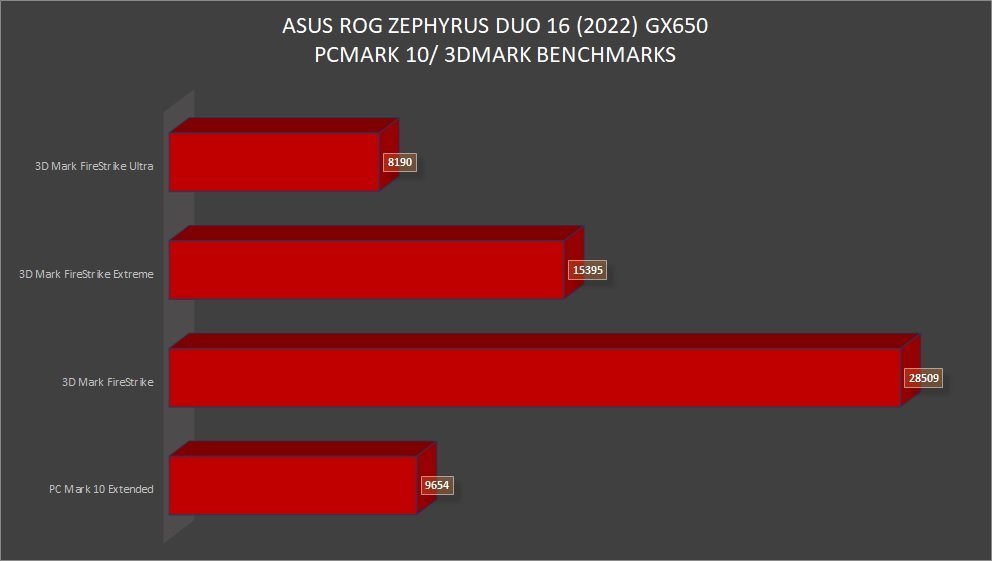 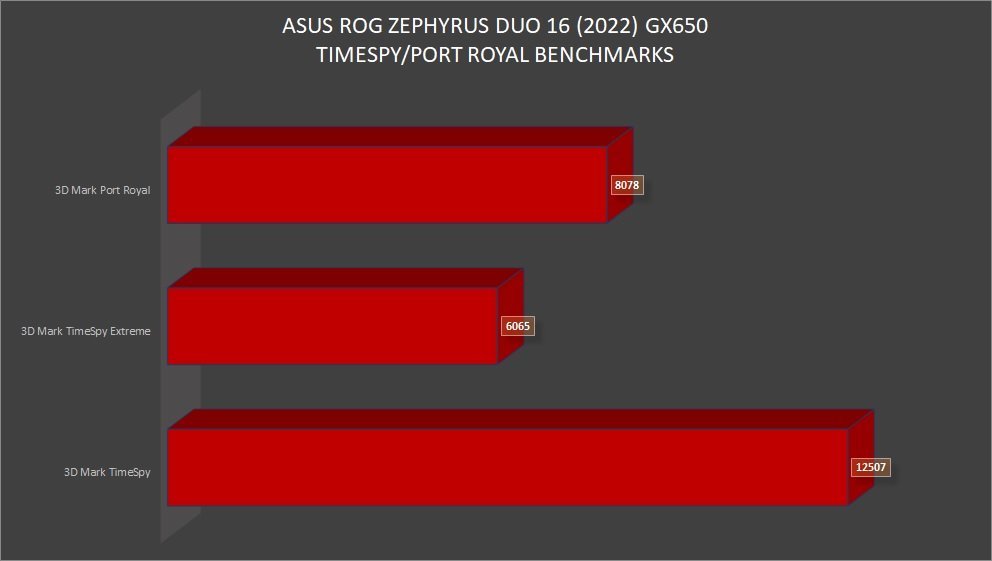 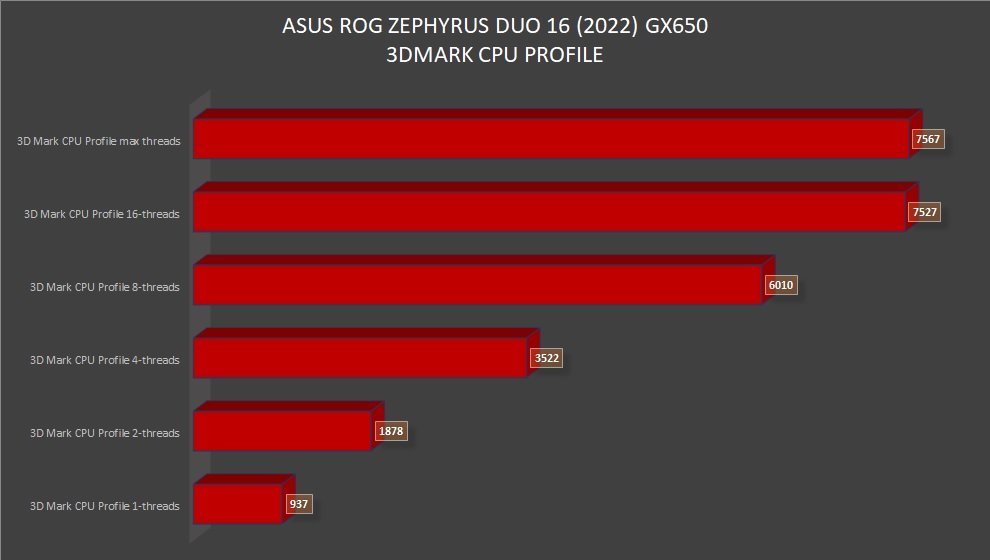 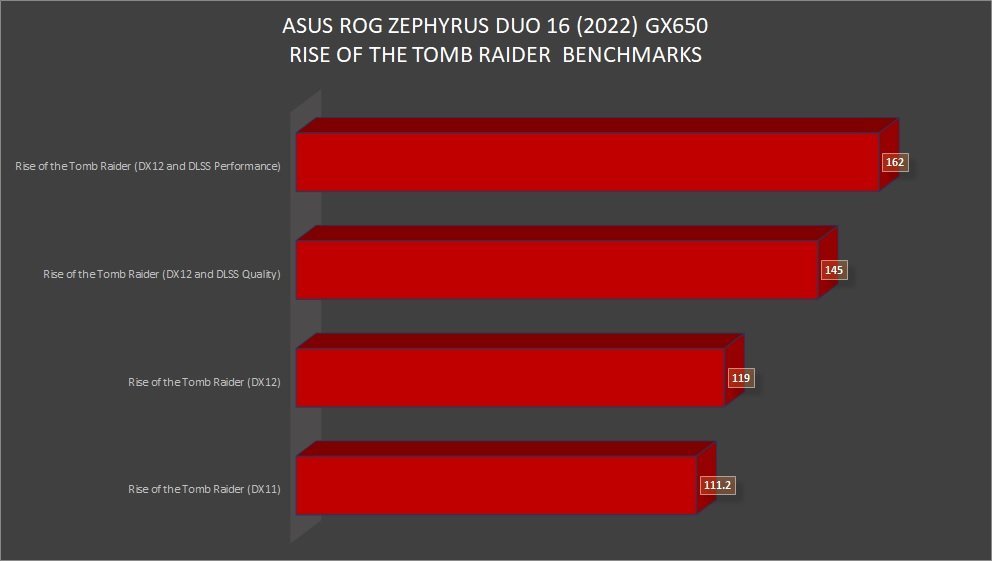 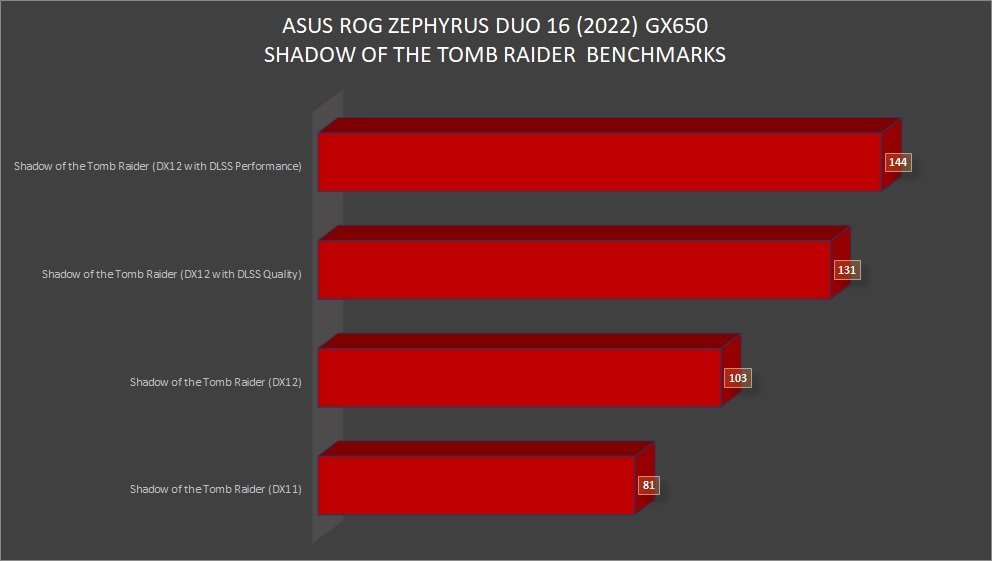 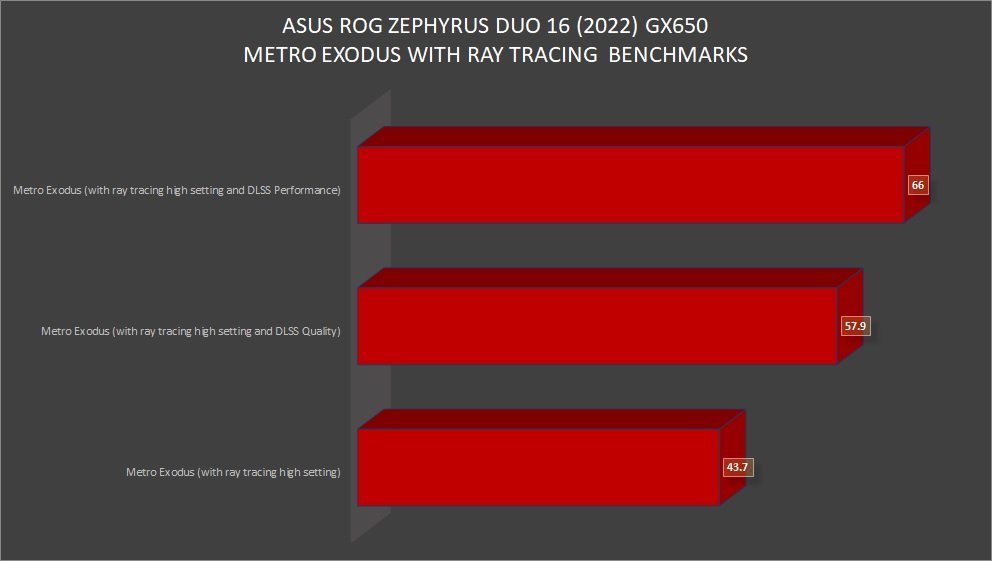 ASUS has equipped the laptop with a MUX switch that establishes a direct link to the GPU for reducing latency and boosting performance by a 9% uplift. Users will be able to choose MUX modes such as discrete GPU MUX mode for the best gaming performance and MUX Hybrid that switches between the NVIDIA GPU and the iGPU of the Ryzen processor. The tests above were done using the discrete GPU MUX mode. The battery used here is a 90WHrs, 4S1P, 4-cell Li-ion powerhouse and we used the PCMark 10 Modern Office battery test to check how long the laptop can last on a single charge. With the discrete GPU MUX mode selected, the laptop lasted for 2 hours and 22 minutes. And when switching to MUX Hybrid mode, the laptop lasted for 3 hours and 6 minutes.

For those looking for a powerful gaming laptop that offers enhanced multitasking capabilities for creators while also being able to play demanding PC games, then check out the ASUS ROG Zephyrus Duo 16 (2022) GX650. The laptop comes with a 16-inch ROG Nebula HDR IPS display with 2560 x 1600 screen resolution and the ScreenPad Plus is a 14-inch IPS panel with 3840 x 1100 as its native resolution. The main display offers a 165Hz refresh rate and AMD FreeSync Premium Pro. You also get a lot of connectivity options, along with a full-size keyboard with N-key rollover, and the trackpad doubles as a number pad. ASUS has loaded the machine with the AMD Ryzen 9 6900HX processor, NVIDIA GeForce RTX 3080 Ti GPU, 32GB DDR5 RAM, PCIe 4.0 SSD, and more. For better cooling, ASUS uses the Thermal Grizzly Conductonaut Extreme liquid metal thermal paste for better conductivity, along with an enhanced cooling system to dissipate heat efficiently. The ROG Zephyrus Duo 16 also holds six studio-quality speakers and dual force-canceling woofers with support for Dolby Atmos.