Ever wondered how a Surface-like tablet would perform if featured discrete graphics? Enter the ROG Flow Z13 GZ301Z, a 2-in-1 gaming tablet that features a powerful 14-core Intel processor and an NVIDIA mobile GPU in a stylish chassis and a kickstand. 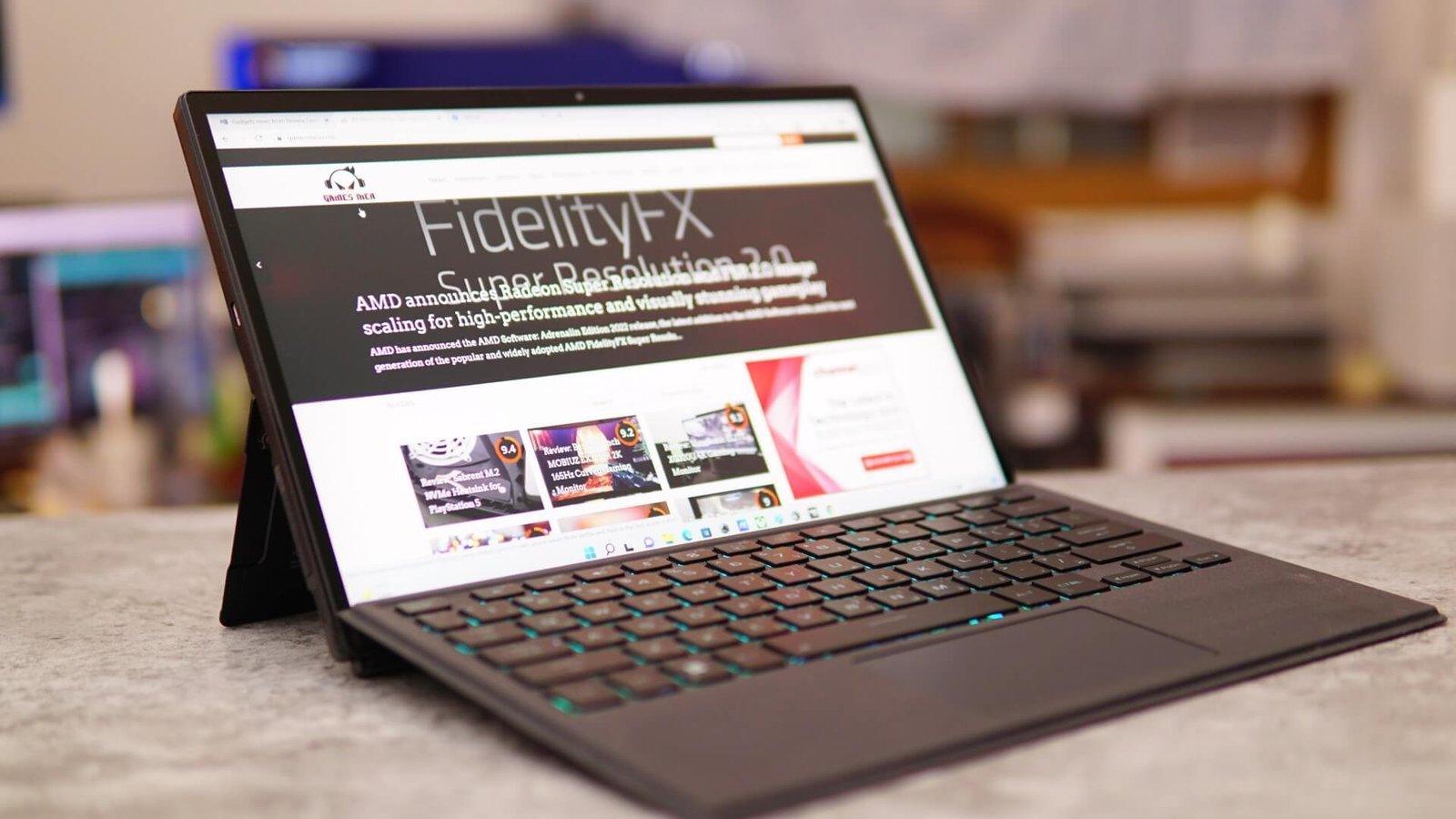 ASUS always surprises us with its new designs and concepts for both normal and gaming products. And while the company has already been releasing dozens of different gaming laptops, the new ROG Flow Z13 gaming tablet is for those who want more horsepower on a tablet that resembles the Microsoft Surface. 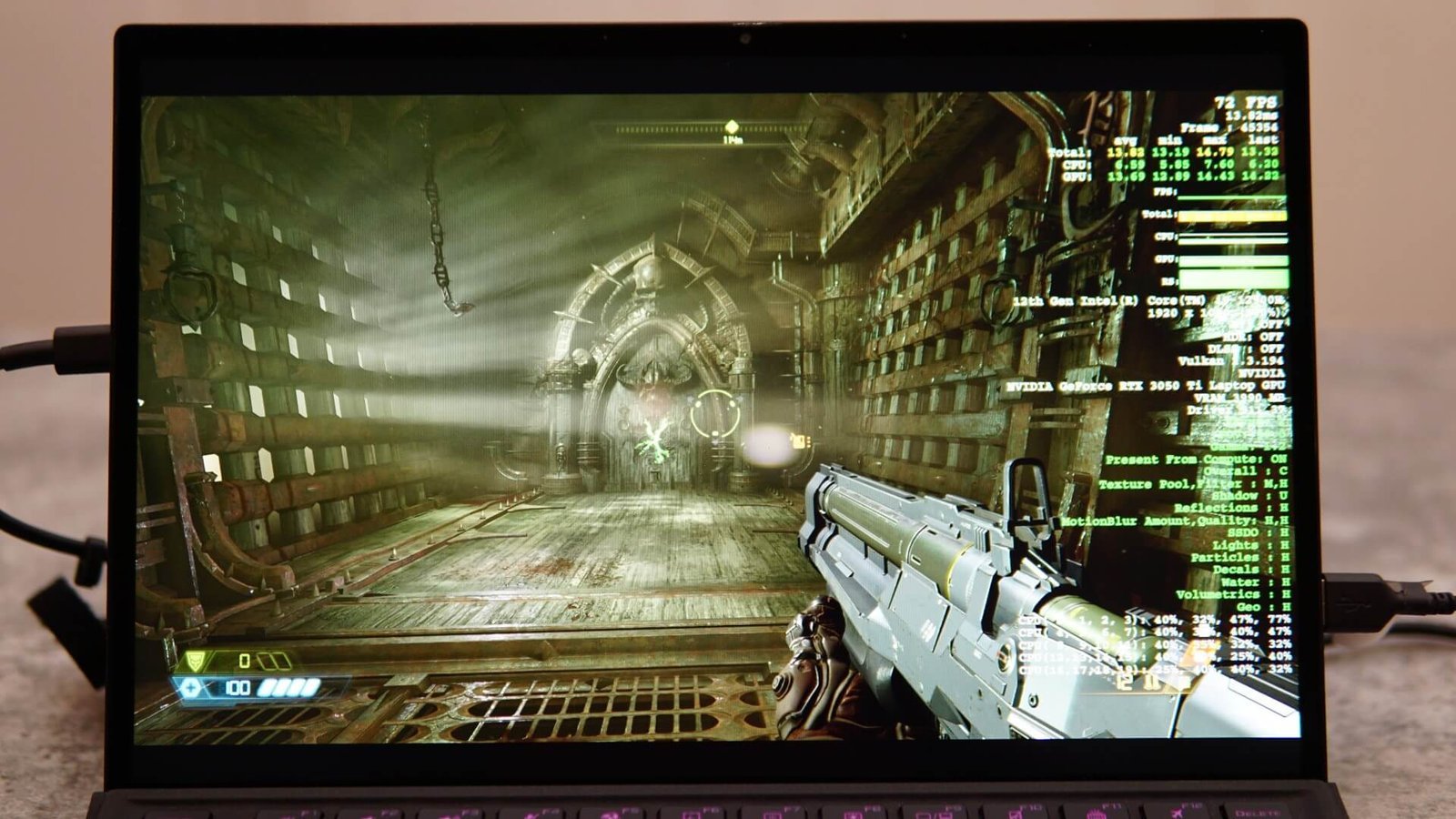 The tablet sports a 13.4-inch IPS touchscreen display with a screen resolution of 1920 x 1200 and 16:10 as the aspect ratio. ASUS also offers another variant of the model with a higher screen resolution of 3840 x 2400. There is also a 720p HD camera located on top of the display. The display also features a fast 120Hz refresh rate for those super-smooth graphics and visuals. And for competitive games, ASUS claims that the display also comes with a response time of 30ms. 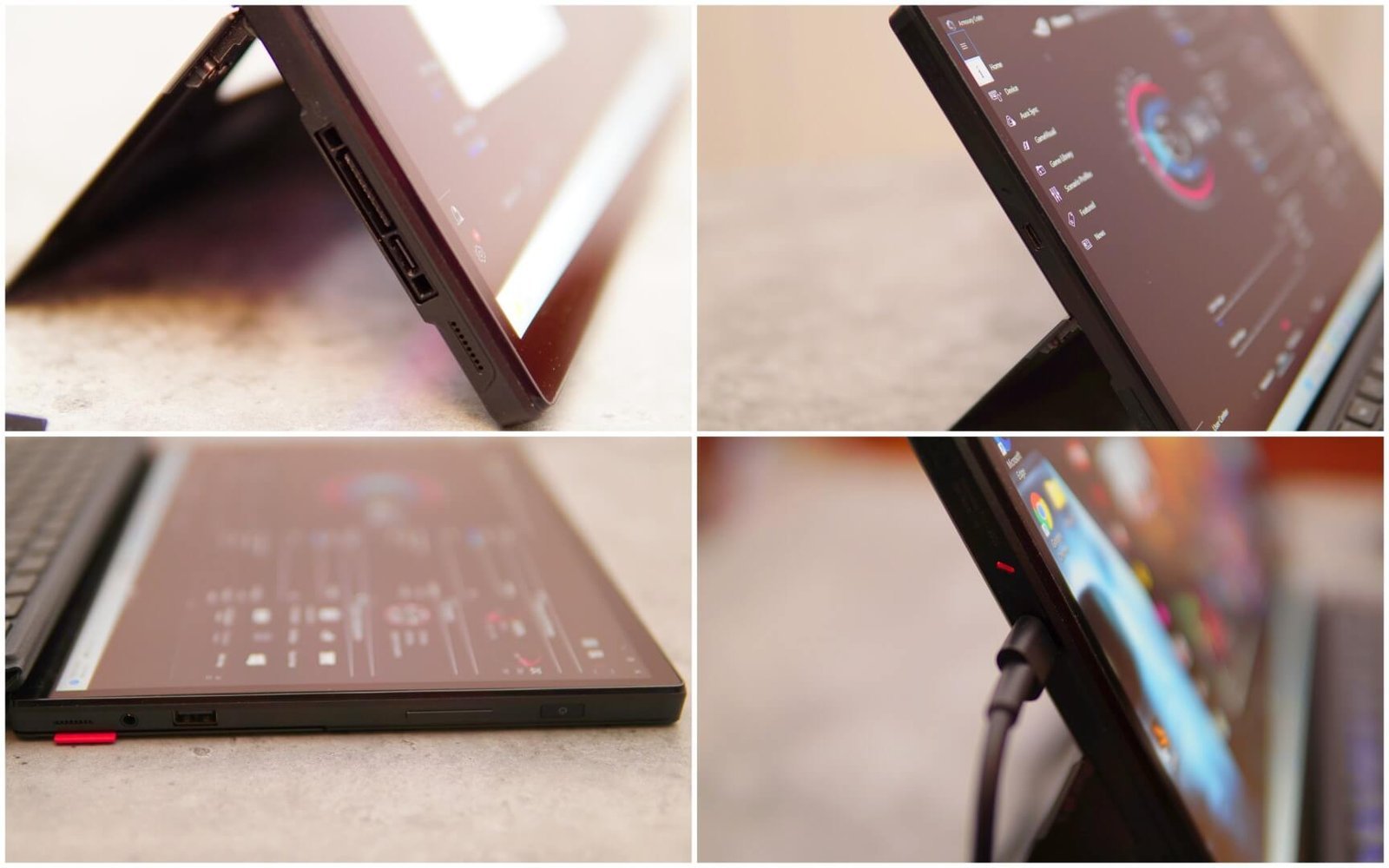 As for connectivity ports and buttons, the right side of the tablet came with a power button with a fingerprint scanner, a volume rocker, a USB 2.0 Type-A port, and a 3.5mm audio jack. On the left side, there is a USB-C port with Thunderbolt 4 support, that also serves for power delivery, along with a dedicated interface for the ROG XG Mobile. However, the device does not have its own DisplayPort or HDMI port. 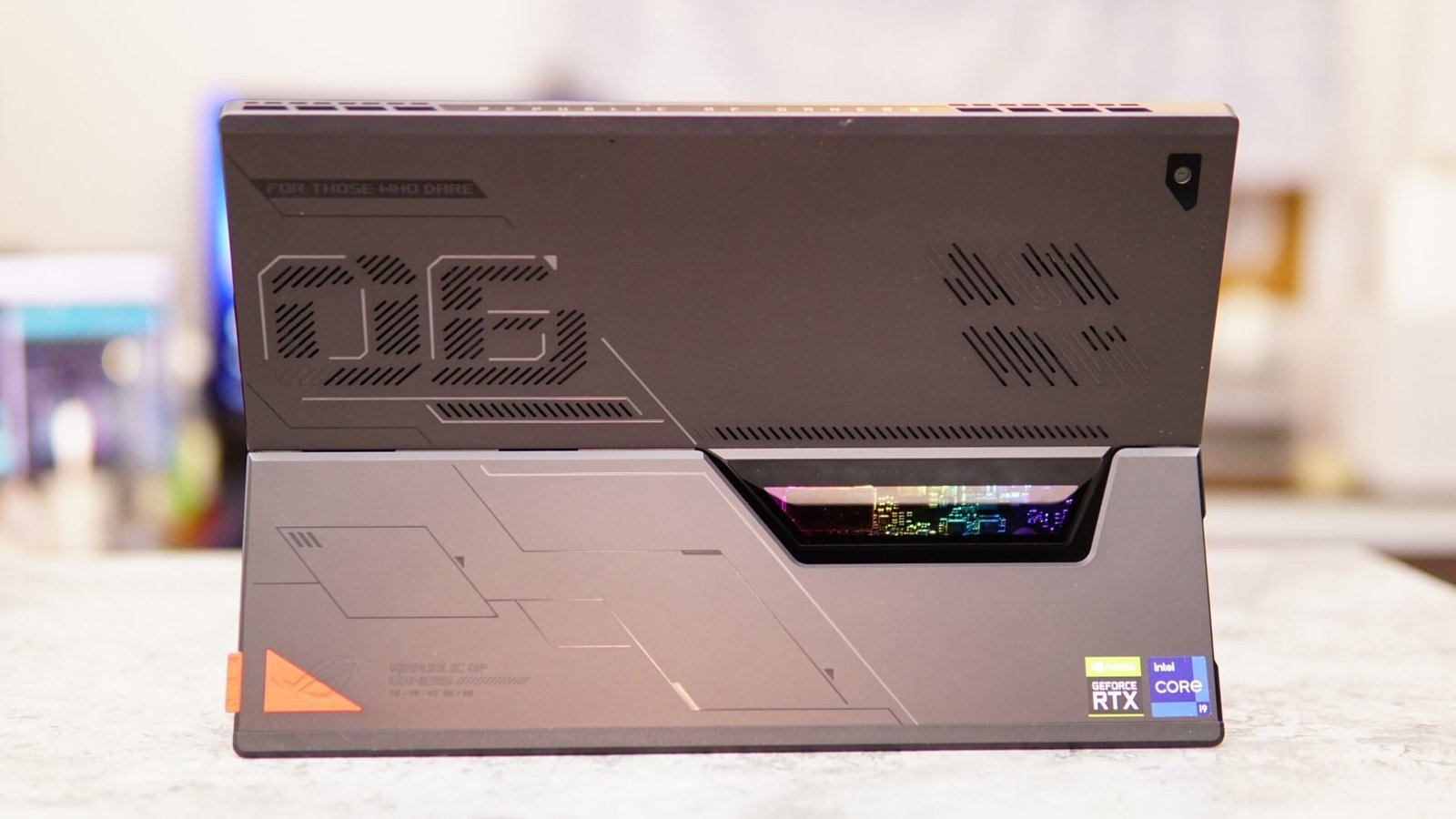 ASUS has given a lot of thought with respect to the design of the tablet. While the rear side features an 8MP camera, ASUS also included vents for air intake. The most important part of the design is the kickstand that can be opened up to 170-degrees. At the left end of the kickstand lies a red ribbon with the ROG insignia, which gives the look of a bookmark. As of today, only gaming desktops, custom or prebuilt, usually feature see-through glass or windows that let users see the entire internal components. ASUS brings in that idea in the form of a CNC-milled window, located on the rear side of the tablet. While the entire component isn’t visible, we are still able to see some of the soldered chips, along with RGB accent lighting. It’s just a design aspect that gets the attention of others. ASUS mentions that the tablet is designed in such a way that there is enough breathing space to accommodate a dual-sided motherboard. 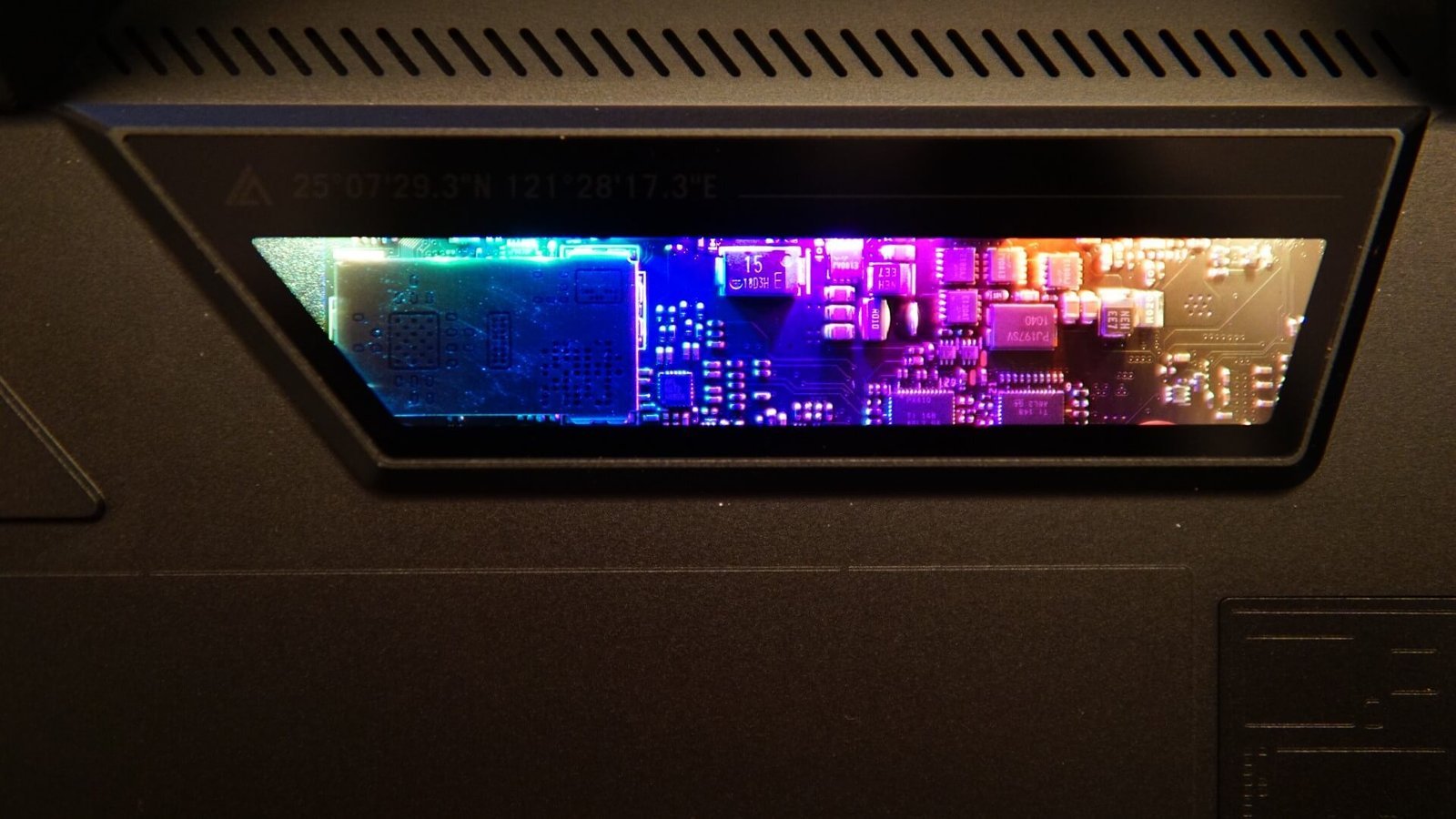 The hinge of the kickstand is well-built and underneath the kickstand is a slot for a MicroSD card and another opening to insert an M.2 2230 type SSD. That’s quite a smart move to utilize the space available. The freedom to also change the M.2 2230 SSD on a tablet is a big win. 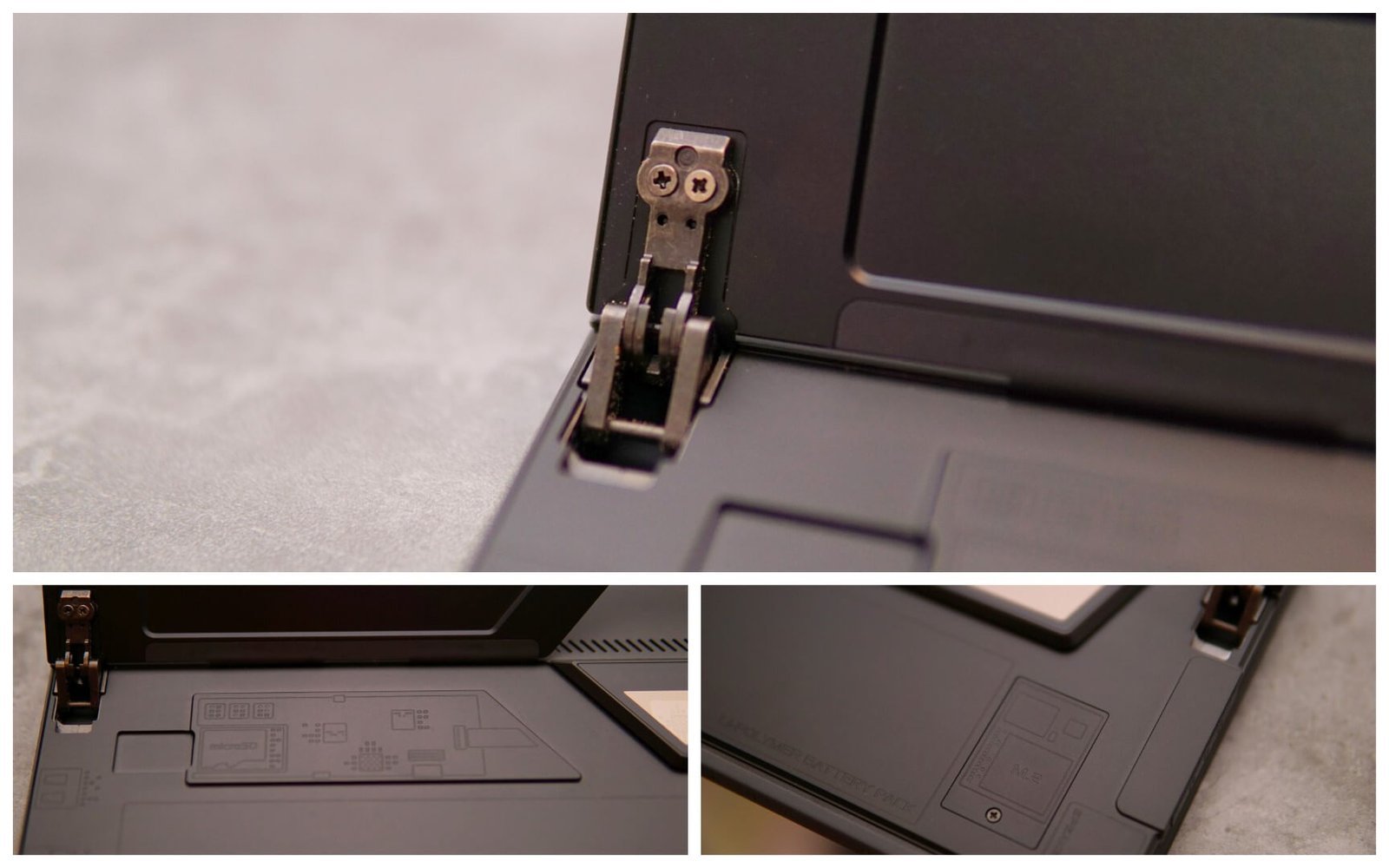 And just as any other tablet, the ASUS ROG Flow Z13 GZ301Z comes with a detachable RGB keyboard panel cover. ASUS mentions that the keyboard features N-key rollover, single-zone RGB with Aura Sync, and a 1.7mm travel distance for typing. The keyboard is comfortable to use for typing and gaming and the trackpad features a smooth surface. The tablet also comes with a stylus that is fun to use and offers precise writing performance. 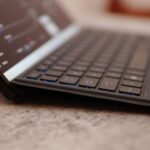 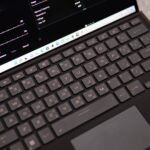 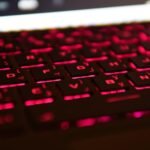 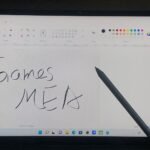 The air exhaust vents of the tablet are located on the top portion, along with the “Republic of Gamers” branding. The dimensions of the tablet are 30.2 x 20.4 x 1.20 ~ 1.20 cm, and the device weighs about 1.18 Kg (almost as light as the lightest ultrabooks on the market). 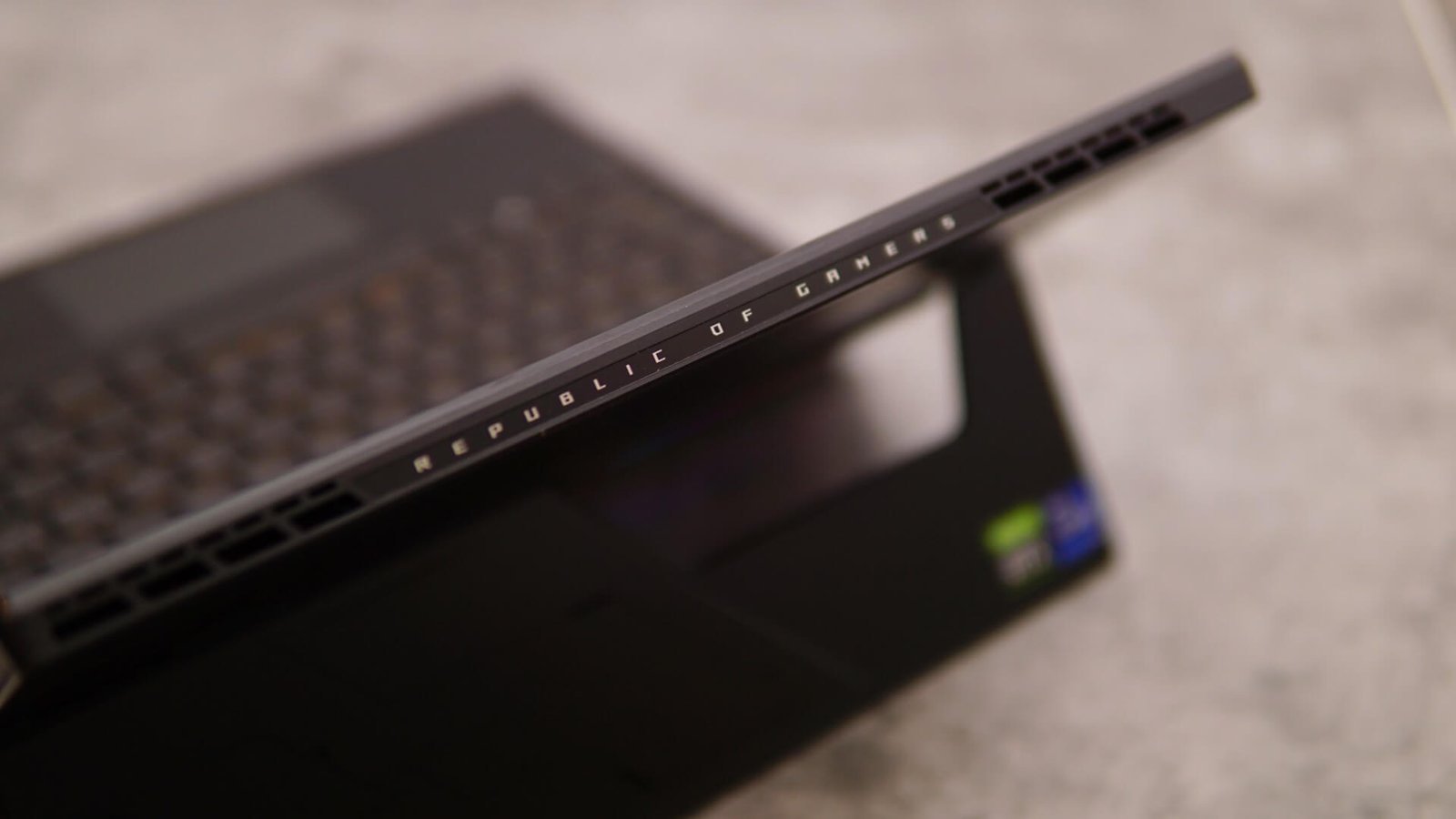 ASUS has also included a pair of bags so you can easily carry around the tablet on the go. 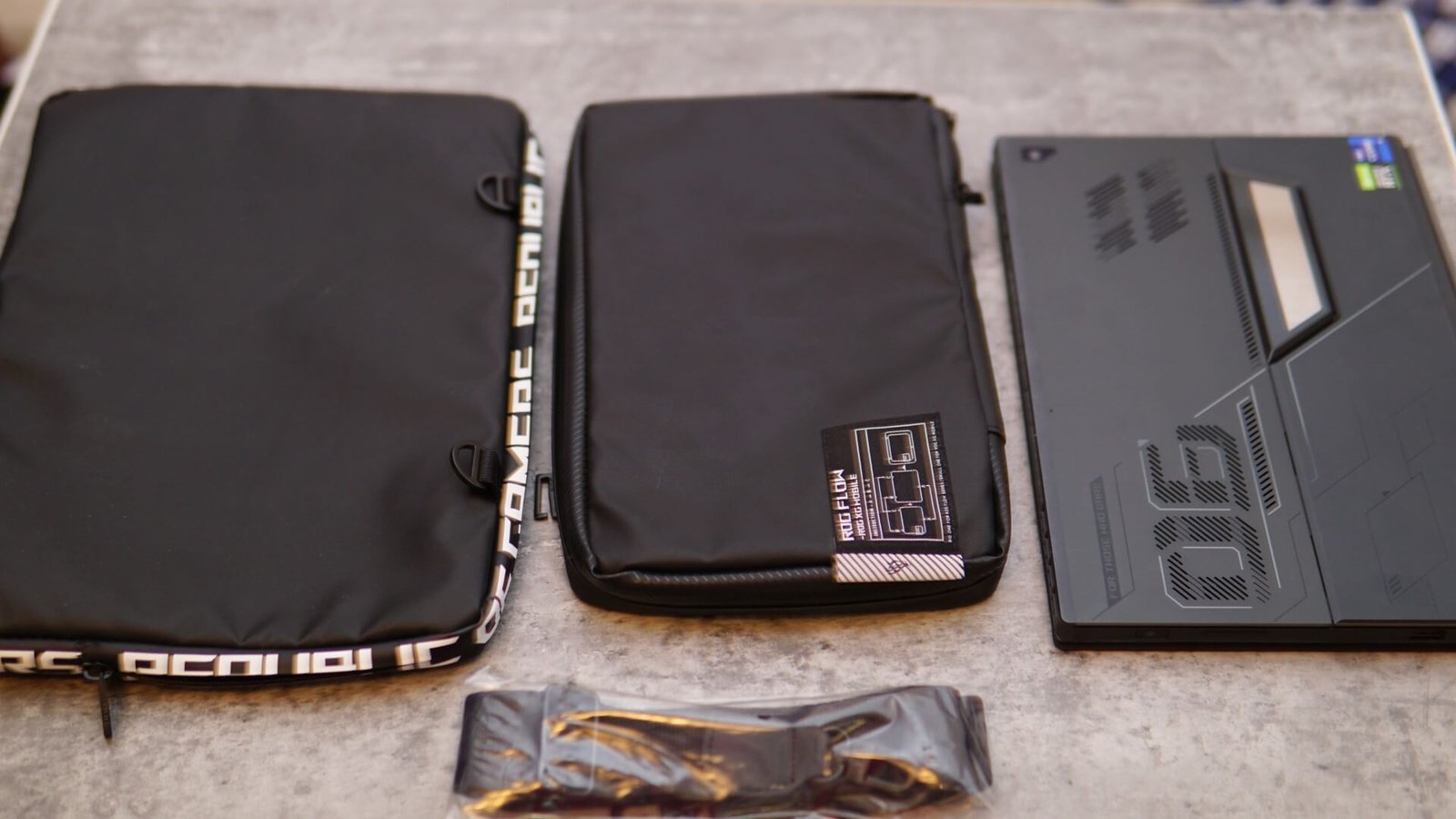 Powering the ASUS ROG Flow Z13 GZ301Z is Intel’s latest 12th generation Alder Lake i9-12900H processor, featuring up to a total of 14 computing cores, six of which are dedicated for high-performance and the rest are eight efficiency cores. The CPU has a base clock speed of 3.8 GHz and can turbo boost up to 5GHz. The tablet also is one of the few in the market to sport DDR5 RAM and there is a total of 16GB of LPDDR5 memory, clocked at 5200 MHz. 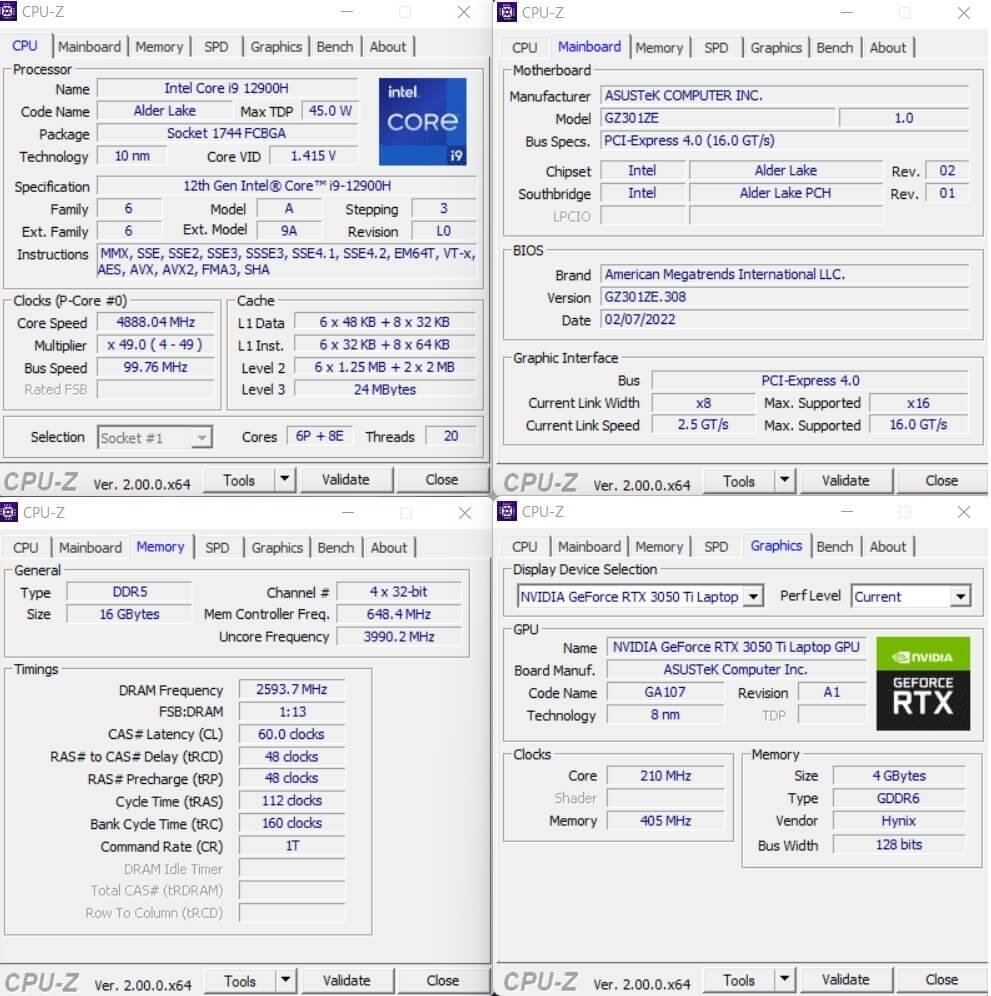 ASUS also featured the tablet with NVIDIA’s RTX 3050Ti GPU with 4GB DDR6 memory. While the GPU isn’t a top-tier model, it’s still capable of delivering decent performances at 1080p resolution. And of course, if you want more juice, you will be able to connect to the ROG XG Mobile device for desktop-class graphics. Unfortunately, we didn’t get a chance to try the tablet with the ROG XG Mobile for review.

Our review sample came with the 1TB Micron 2450 PCIe 4.0 SSD that gave blazing read and write speeds up to 3500 MB/s and 3000 MB/s, respectively. The endurance of the drive reaches up to 600 TBW. The tablet also comes with Windows 11 Home OS out of the box.

The tablet also features dual speakers, located on either side of the device, along with other audio technologies that include Smart Amp Technology with Dolby Atmos, AI noise-canceling technology, Hi-Res audio capability, and more. There is also a built-in triple microphone array on the device. For wireless connectivity, the tablet sports the Intel AX211 Wi-Fi 6E(802.11ax) and Bluetooth 5.2 (Dual-band).

ASUS also has included the Armoury Crate that helps to monitor the temperature and speed, and choose the mode of operation of the tablet, whether you want silent, turbo, performance, and more. The ASUS ROG Flow Z13 GZ301Z also offers the MUX switch mode for high performance, ensuring that the discrete GPU is always used and helps to increase the graphics performance of the system. The MUX performance mode can be enabled or disabled using the Armoury Crate application. Below are the results of the benchmarks we performed on the tablet. 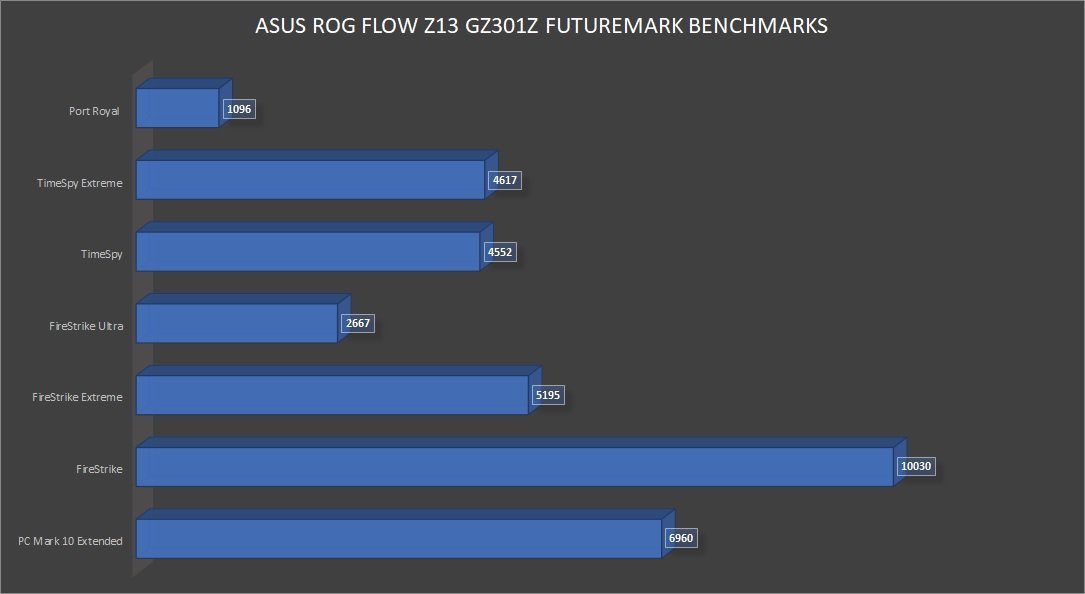 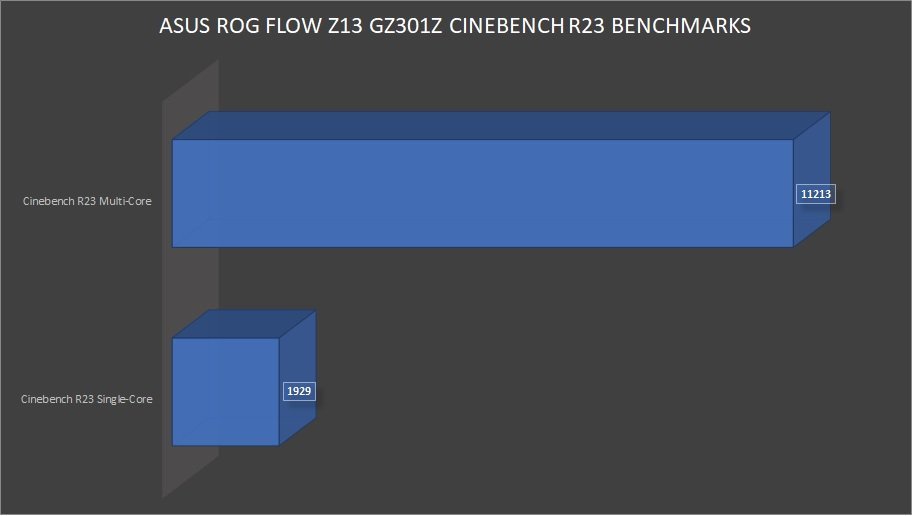 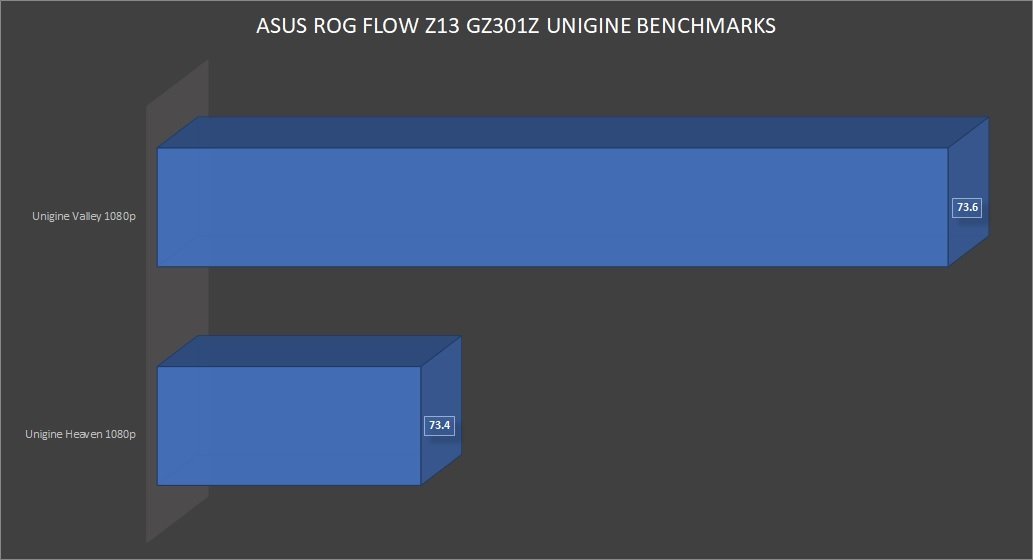 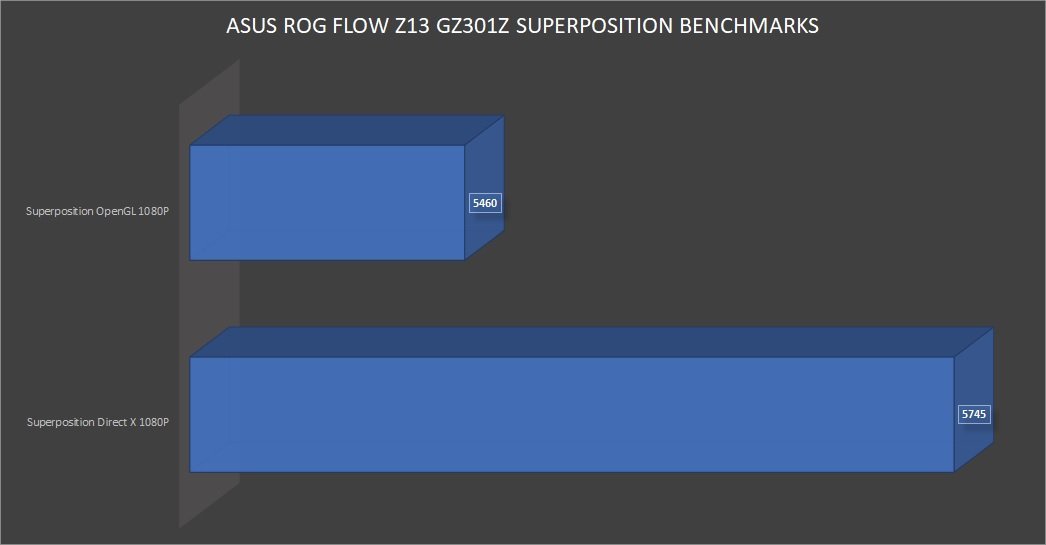 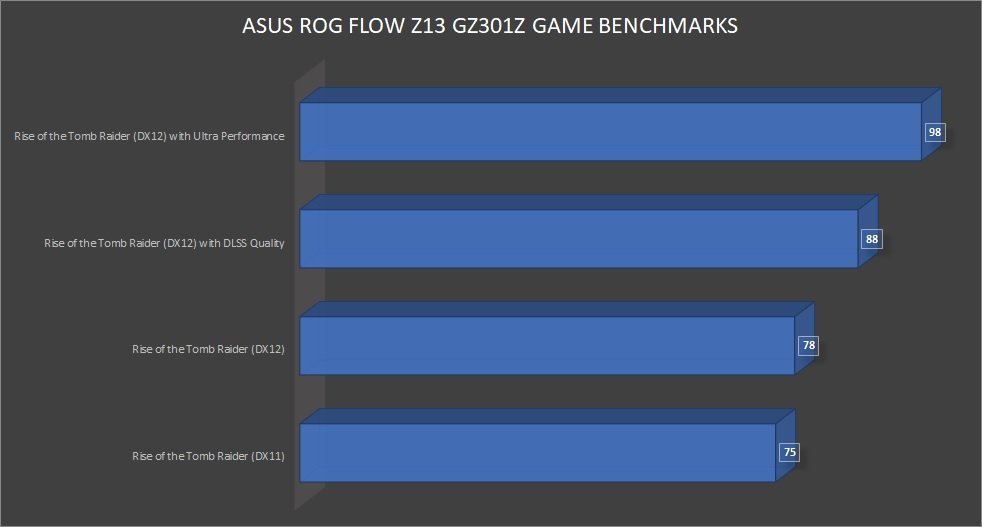 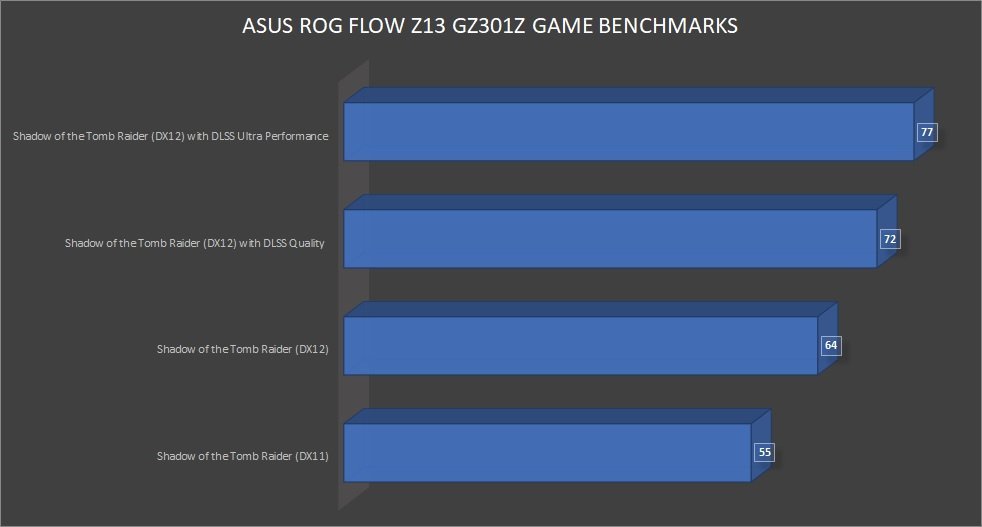 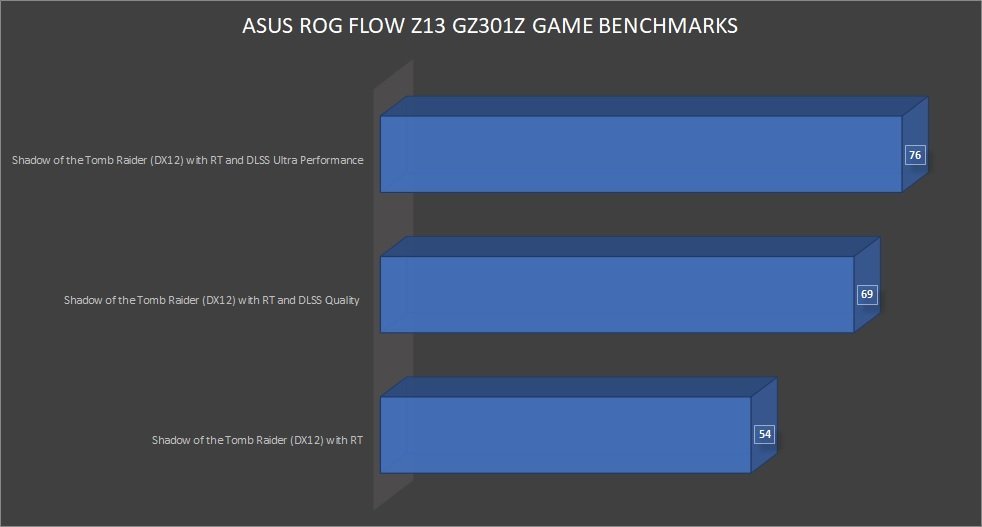 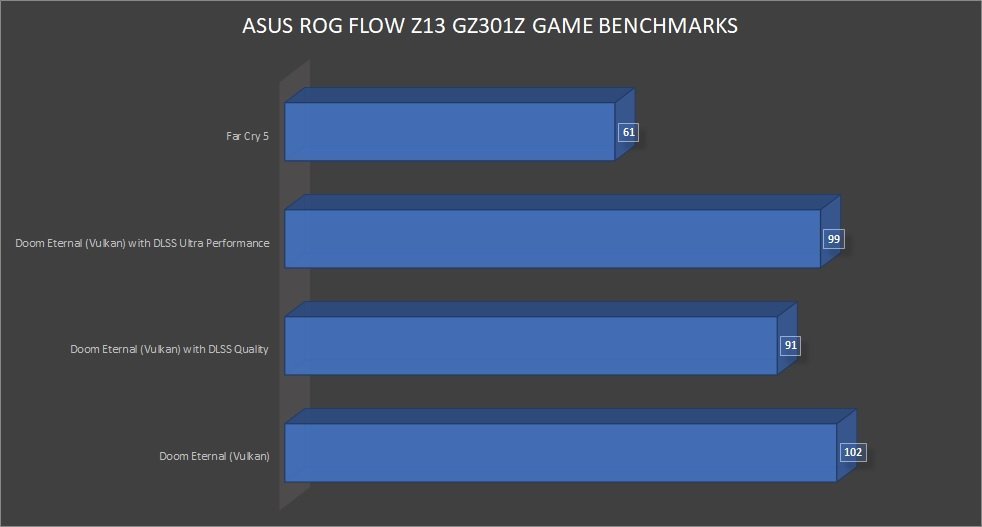 The new ASUS ROG tablet houses a 56WHrs, 4S1P, 4-cell Li-ion battery. And from our PC Mark 10 battery test, the device lasted for 5 hours and 51 minutes. Users also will be able to make use of the MUX chip’s Hybrid Mode, where the device is capable of switching between the discrete GPU and the iGPU for better battery life. For normal usage, the tablet was able to last for almost a day of use while we surf the internet, stream videos, edit articles, spreadsheets, and more.

For those looking to carry a Windows 11 tablet that offers performance for both normal workloads and gaming, then the ASUS ROG Flow Z13 GZ301Z (2022) is worth a try. The tablet features an impressive chassis with a gamer-instinct design and the 13.4-inch IPS panel comes with FHD resolution at 120Hz refresh rate and a wider 16:10 aspect ratio. The kickstand offers flexibility up to 170-degrees and there is also a see-through window that showcases the innards of the tablet. The device also offers several connectivity options, including an interface for the ROG XG Mobile. The ROG tablet also comes with the powerful 14-core Intel i9-12900H processor and the NVIDIA RTX 3050 Ti GPU onboard, along with 16GB of LPDDR5 RAM and a blazing fast 1TB PCIe 4.0 SSD. The gaming performance was decent with the discrete GPU and can be boosted easily once a desktop GPU is connected via the ROG XG Mobile. The tablet also comes with a detachable keyboard with Aura Sync support and a stylus.