While AMD charges ahead and leads the processor market with the release of the powerful ZEN 3 based Ryzen 5000 processors, the older ZEN 2 CPUs are no slouch either when it comes to performance. And for those who don’t have a budget to invest in ZEN 3 processors, the ZEN 2 is a cheaper alternative that you could consider. We got to try the refreshed ZEN 2 chip called the Ryzen 7 3800XT, and here are our thoughts about it.

Specifications
The Ryzen 3000 series ZEN 2 processors have proved its worth in the market back when it was released, and XT versions are slightly beefed-up versions with a modest increase in clock speeds. The whole point of the Ryzen 3000XT processors is to counter Intel’s Comet Lake chips to level the playing field. Falling under the codename Matisse, all of the ZEN 2 chips, including the XT counterparts are fabbed on the TSMC based 7nm node and with the new architecture that offers considerable performance improvements over the first generation Ryzen line-up. 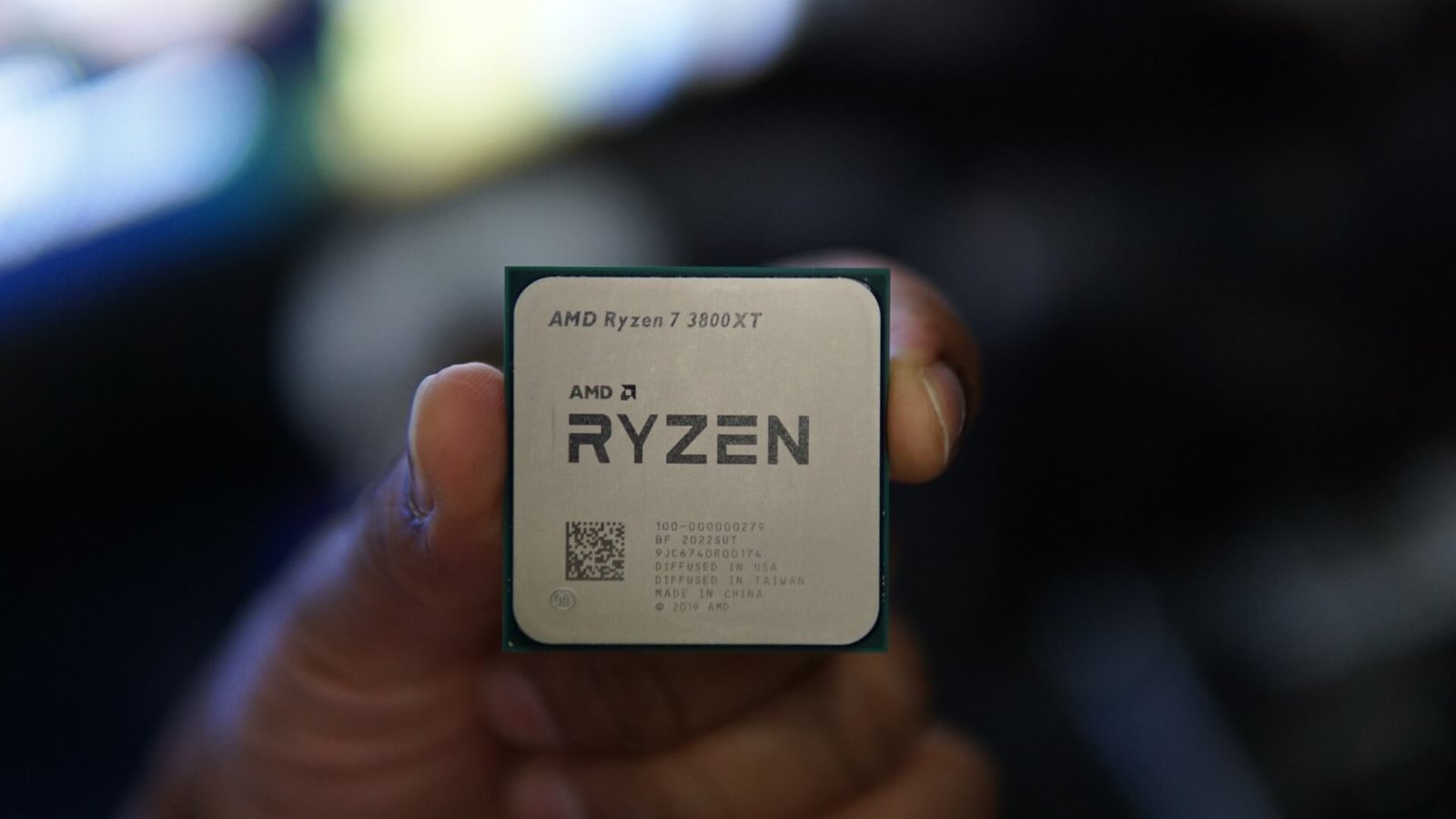 Just as the other Ryzen 7 chips, the 3800XT packs a total of 8 computing cores and 16 threads. The chip has a base clock speed of 3.9 GHz and can boost up to 4.7 GHz speeds as maximum clocks. On the contrary, the earlier 3800X has the same base clock speed but the boost clocks are rated at 4.5 GHz. This means AMD has tuned the 3800XT to receive a 200MHz uplift for maximum clocks. Both the chips feature the same amount of L2 and L3 cache memory. The 3800XT features a 32MB L3 cache and 4MB L2 cache. The TDP also remains the same at 105W.

The architecture that is used on the ZEN 2 is a major step up from the 1st generation, offering up to 15% IPC improvements. The ZEN 2 architecture can feature up to two CCDs (Core chiplet die), and each of these CCDs can have a maximum of two CCXs (core complex). Each CCX holds up to four CPU cores. In the case of 3800XT, we get only one fully activated CCD with two CCXs featuring a total of eight CPU ZEN 2 cores. It also indicates that 3800XT is the fastest Zen 2 based chip AMD has with a single CCD. The two CCXs are interconnected with what AMD calls the Infinity Fabric. The Infinity Fabric has been a hot topic of discussion among Ryzen users since the performance can vastly be improved by using faster RAM. And since the chip does not have a second CCD activated, all of the 32MB L3 cache and the low-level L2 cache can be accessed by the two CCXs present. 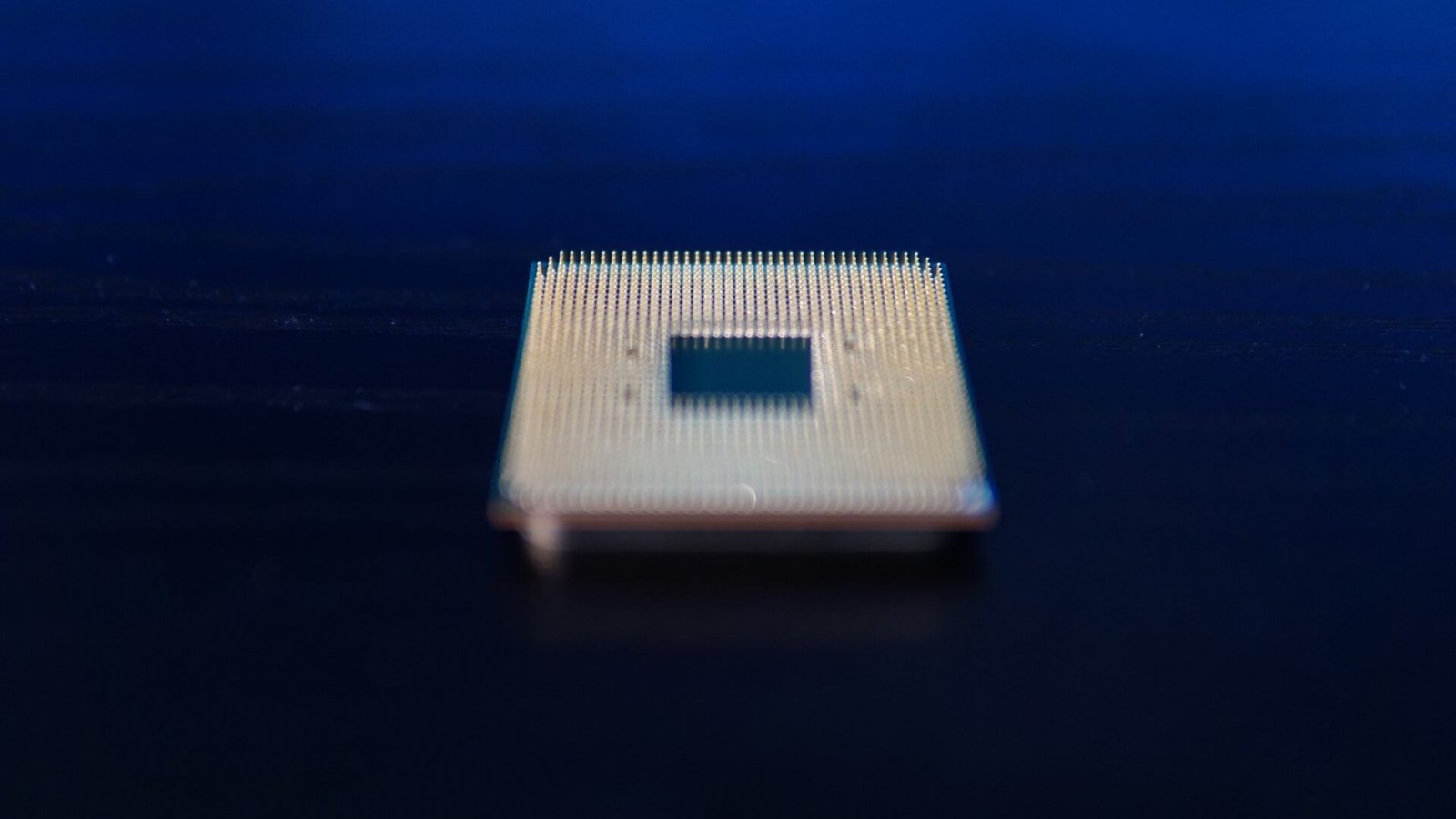 While AMD still recommends on their product pages that the memory speeds supported are up to 3200MHz, the company has already stated earlier that higher memory speeds result in better gaming performance, since the IF is tied with respect to the speed of the memory. AMD has already mentioned in the past that 3600MHz DDR4 is the sweet spot that offers a 1:1 ratio for the best latency. Normally, when you select the RAM speed as 3600 MHz (UCLK), AMD claims that the Infinity Fabric (FCLK) should then be 1800MHz. And if you are selecting memory speed as 3800MHz, the Infinity Fabric should be set at 1800 MHz. Any higher and AMD claims that the 1:1 coupling will be lost and would enter a 2:1 mode. The lower latency also helps to boost performance if you can manage to manually tighten the memory timings.

AMD also delivers most of the important features of ZEN 2 such as the StoreMI that helps gamers to run their applications and games with SSD-like performance when the files are installed on a normal hard disk drive, thanks to the new algorithm that is designed and pairs HHDs and SSDs of any capacity. The method simply mirrors the files from the hard drive onto a new SSD and runs the program faster, without the need to reinstall the entire application. The StoreMI also helps to accelerate the speed of the Windows operating system. And just as the previous Ryzen 3000 chips, the new XT branded processors can take advantage of PCIe 4.0. Testbed
We had recently built a new testbed for all our future hardware. Although not the latest, we made sure to keep some of the relevant hardware reviews. The processor is of course the AMD Ryzen 3800XT and we did not do any sort of overclocking for this review. The chip is mounted upon the ASUS TUF X570 PLUS GAMING motherboard. We made sure to get the latest AM4 motherboard series so that we can upgrade to the Ryzen 5000 series processors at a later point. Kingston had recently sent us a pair of 32GB DDR4 RAM clocked at 3200 MHz and we had used it as the RAM for 3DMark benchmarks. However, for this review, we had used the GSkill Trident Z RGB RAM modules that totals up to 32GB DDR4 with 4 RAM modules. The speed of RAM is 3600MHz. As we had mentioned earlier in the review, the Infinity Fabric benefits a lot from faster RAM and AMD had already recommended 3600 MHz as the sweet spot. Hence we chose the DOCP profile with 3600MHz RAM and with the latency automatically selected as CL16 on the motherboard BIOS. While the GSkill RAM we used features B-Die memory (perfect for overclocking memories and tightening timings), we decided to let it run at default settings as the motherboard sees fit for this review. So for all the tests we performed, we had benchmarked with the RAM at 3600 MHz. We will be sure to focus on a different article in the future to showcase how much RAM speeds do impact Ryzen performance. Do note that this RAM isn’t the officially certified ones for Ryzen processors, however, it still does the job well. (The recently released GSkill Trident Z NEO series are AMD Ryzen certified).

The primary drive is none other than the Kingston KC2500 NVMe SSD that we had recently reviewed, followed by a 2TB Samsung 860 EVO SSD that is used to store all the games. We installed the latest build of Windows 10 Pro on the KC2500 SSD. The graphics card used here is the XFX THICC II Ultra 5700 XT GPU. While we know that it isn’t the latest, this was the best we could manage to test the processor during the review. And since the 5700XT is a mid-high level GPU, we focused on benchmarking games at 1080p and 2K resolutions. The power supply used here is the XFX XTI 1000W modular with the 80 Plus Titanium certification for the best power efficiency. And to keep the CPU cool, we used the Corsair iCUE H100i Pro XT RGB all-in-one cooler, featuring a 240mm radiator, and two 120mm Corsair ML series PWM fans.

Benchmarks and Performance
Our benchmarks include a focus on the performance of the Ryzen 3800XT on tests such as the Cinebench R15 and R23 for single/multi-core performance, 3D Mark FireStrike, and TimySpy tests (which include FireStrike, FireStrike Extreme, FireStrike Ultra, TimeSpy, and TimeSpy Extreme), and Blender render tests (scenes for BMW, Classroom, Fishy Cat, Koro, Barcelona, and Victor render tests). The games we tested were Rise of the Tomb Raider (DX11, DX12 modes), Shadow of the Tomb Raider (DX11, DX12 modes), Metro Exodus (DX11, DX12 modes), and Ashes of Singularity: Escalation for both GPU and CPU (DX11, DX12, Vulkan modes). We also tested Unigine benchmarks such as Heaven, Valley, and the latest Superposition test. All the games and graphical tests were benchmarked at Full HD and 2560 x 1440 resolutions, along with maximum graphical settings. We turned off any AMD or NVIDIA based graphical settings to keep the benchmark scores fair.

We tested the FireStrike and TimeSpy tests using both the Kingston Fury DDR4 AAT 3200MHz speed and the GSkill Trident Z RGB RAM at 3600 MHz speeds. Our FireStrike score is 23873 points with the 3200MHz RAM, and when using the 3600MHz RAM, we get an improvement of 24053 points. In our FireStrike Extreme tests, we get 11765 points with 3200MHz RAM speeds, and we see a jump to 12467 points when using the faster 3600 MHz RAM. However, our FireStrike Ultra does not get major improvements between both the RAM speeds, achieving a score of 6755 points. And with respect to TimeSpy benchmarks that focus on DirectX 12 performance, the TimeSpy score is 9593 points with the 3200MHz RAM, and a bit further to 9647 points when using the 3600MHz RAM. The TimeSpy Extreme score is more or less the same for both RAM speeds and we got a score of 4598 points. 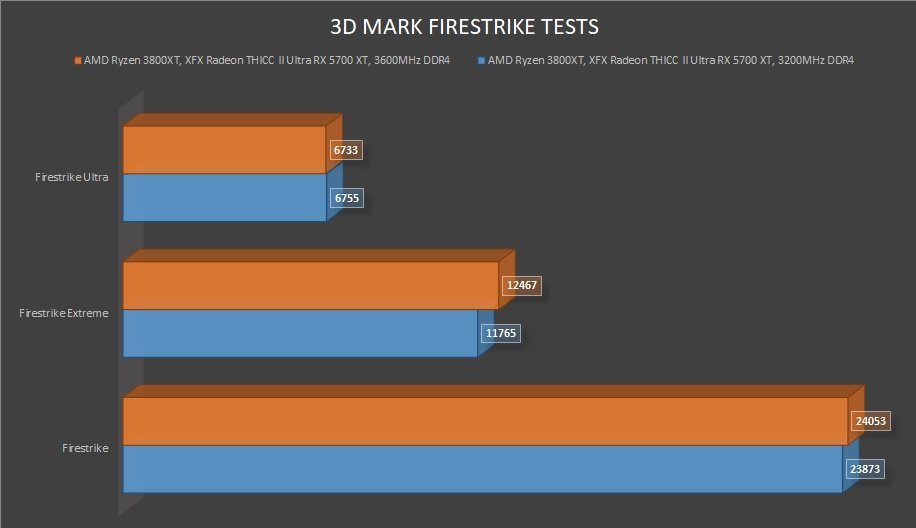 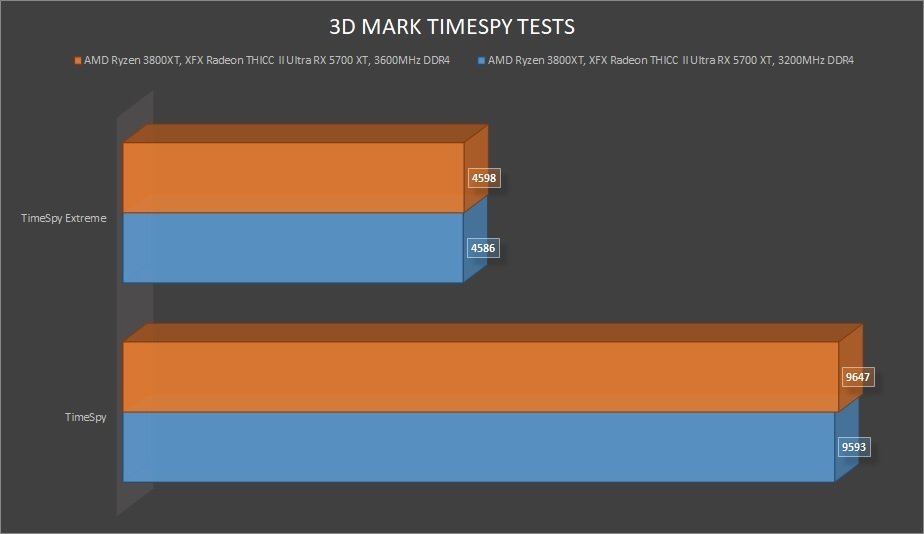 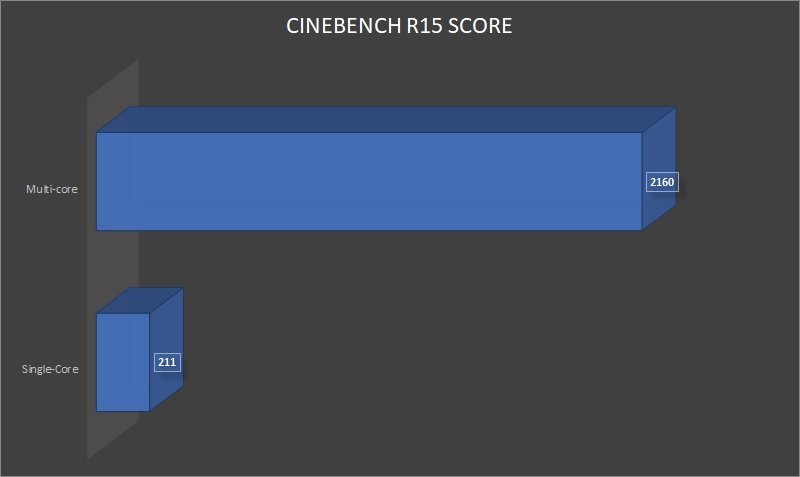 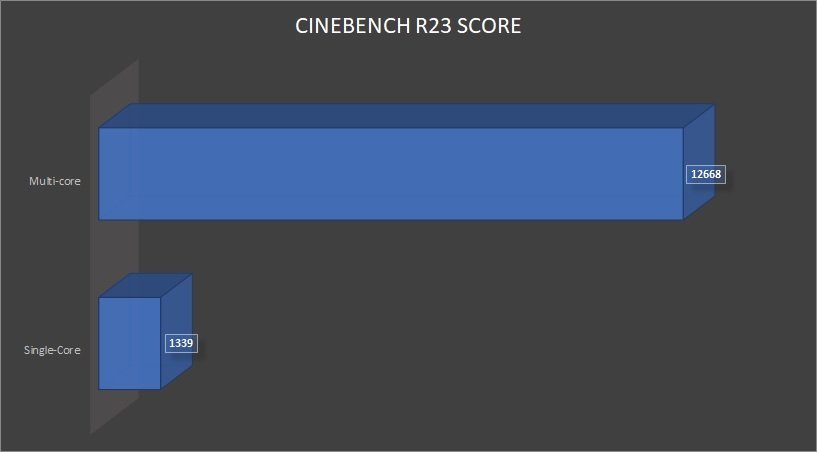 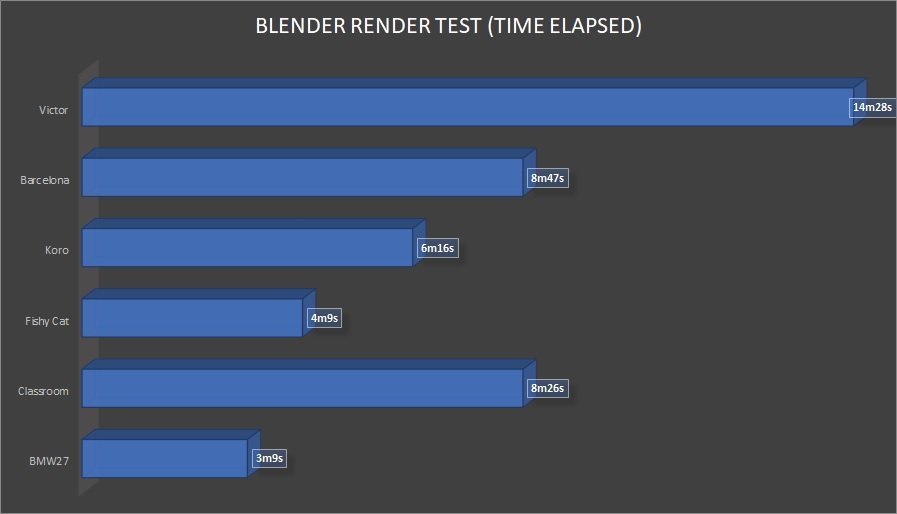 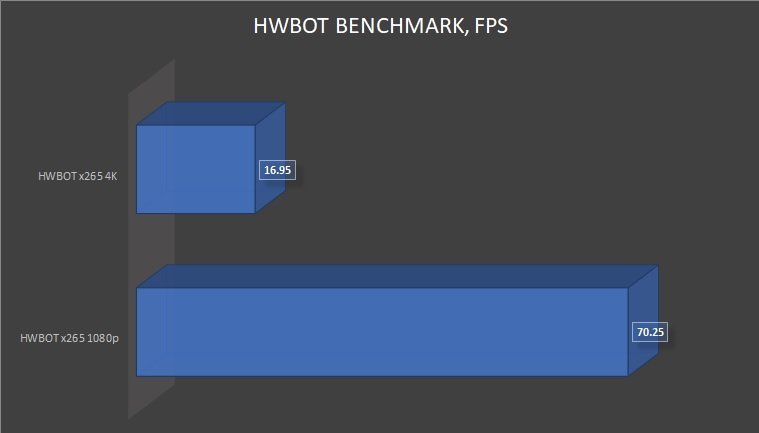 And here are the benchmark results for Valley, Heaven, and the latest Superposition tests, all in both Full HD and 2K resolutions and at maximum settings. Take a look at the overall scores, average, minimum and maximum FPS. 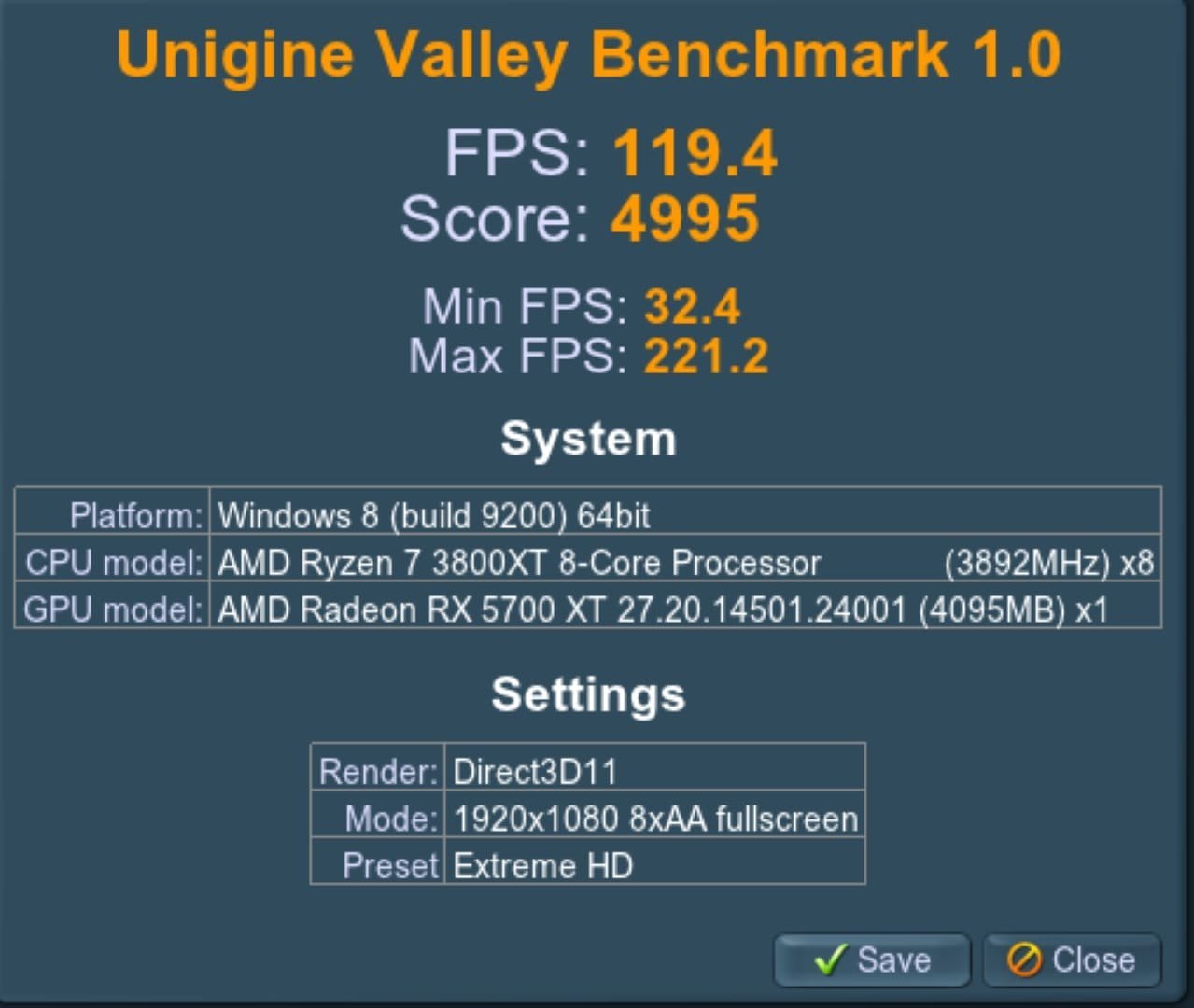 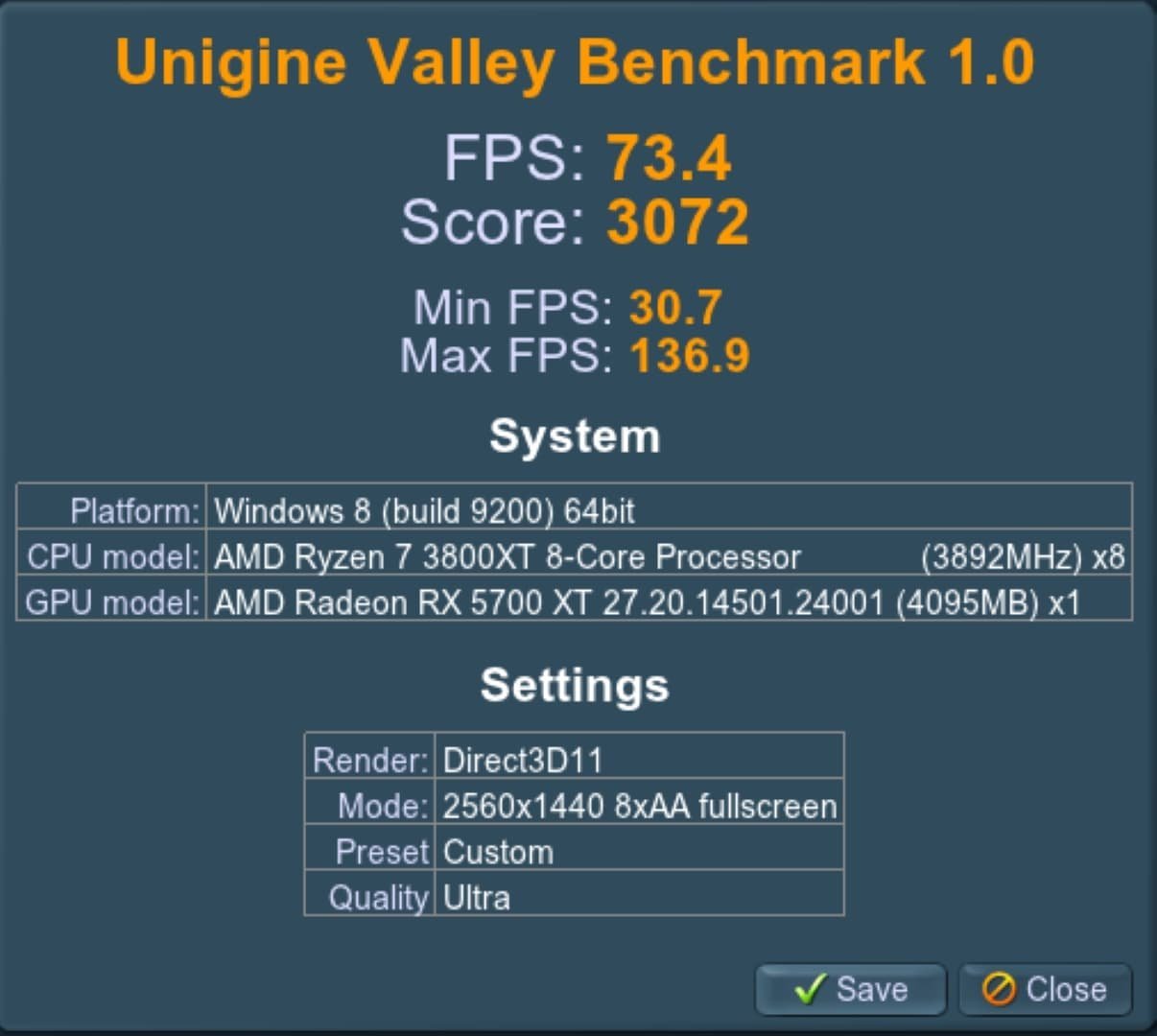 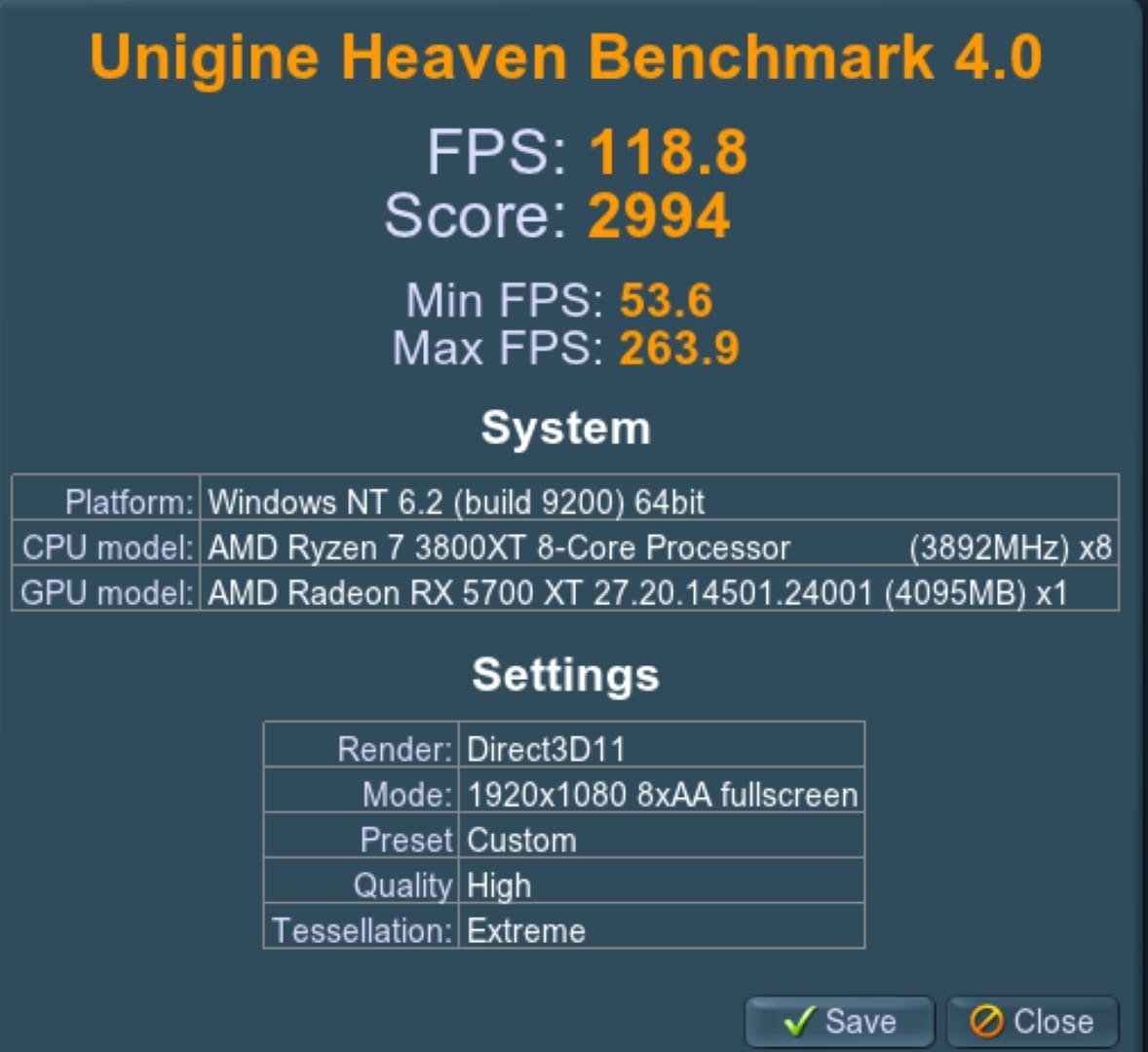 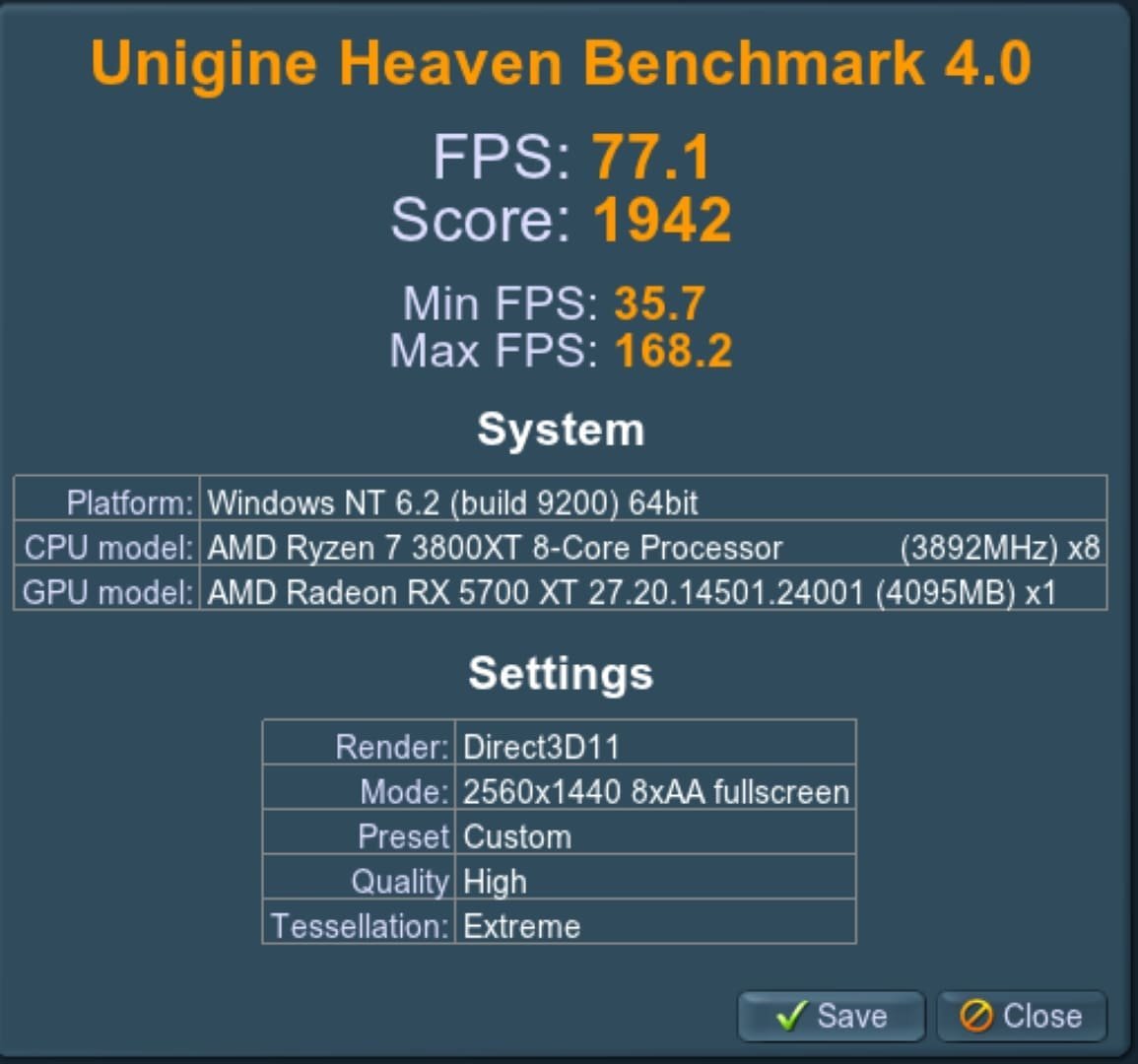 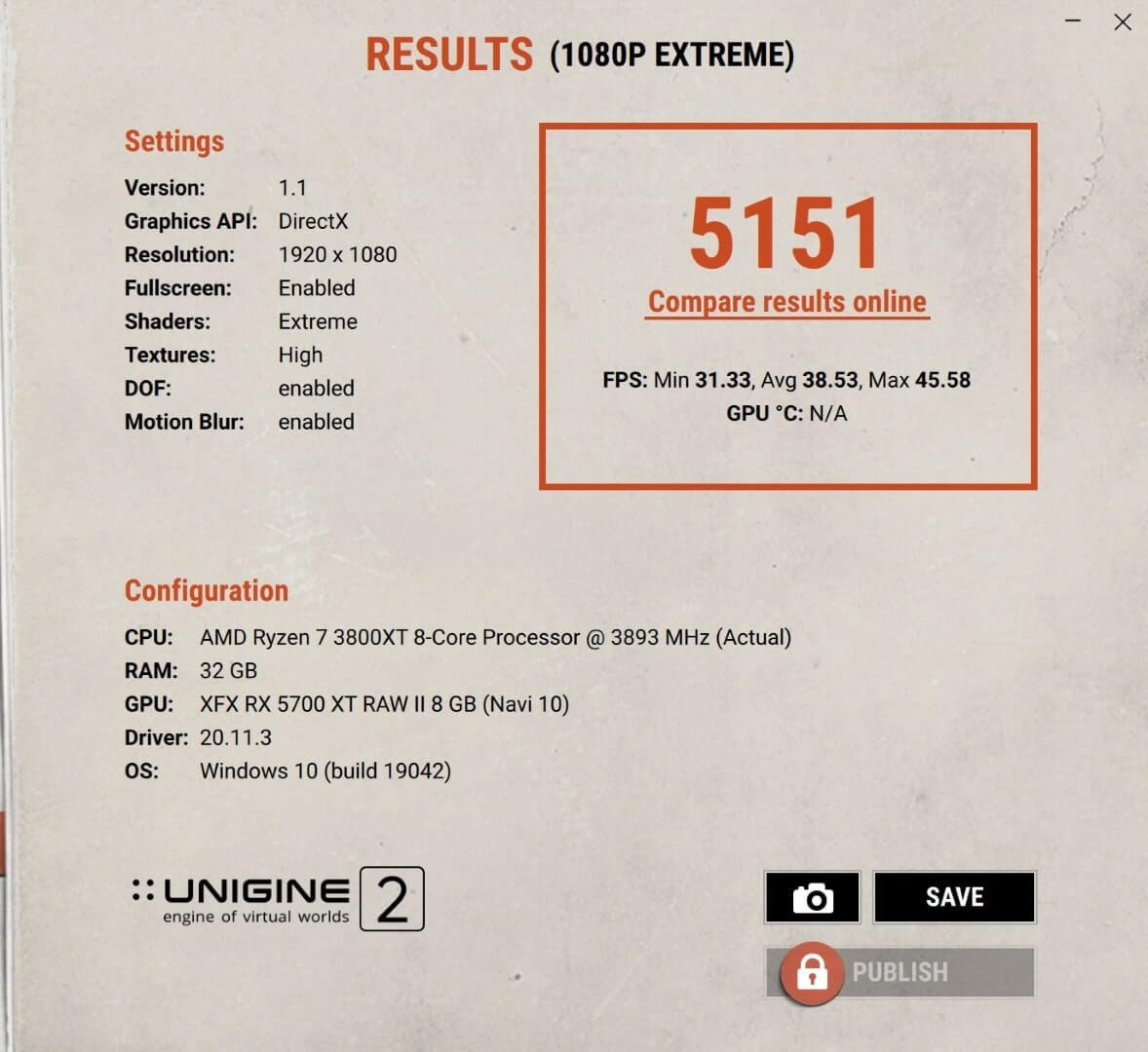 Now comes the framerate benchmarks for game titles for both 1080p 1920 x 1080 and 2560 x 1440 resolutions. For our Rise of the Tomb Raider test, we got an average of 80fps at Full HD resolution for both DX11 and DX12 modes. Our Shadow of the Tomb Raider test at 1080p achieved 63fps on DX11 mode and a further improvement to 80fps in DX12 mode. At 2K resolution, the Shadow of the Tomb Raider ran at 47fps on average with DX11 mode and 54fps on DX12 mode. To hit the 60fps mark, you will need to tune down the graphical settings at 2K. For our Metro Exodus test, our DX11 2K test achieved 51fps and for the DX12 test, we got 55fps on average. Once again, the 2K resolution is taking a bit of a toll here not hitting the 60fps mark. However, for FullHD resolutions, we got 69fps on average for both DX11 and DX12 mode. 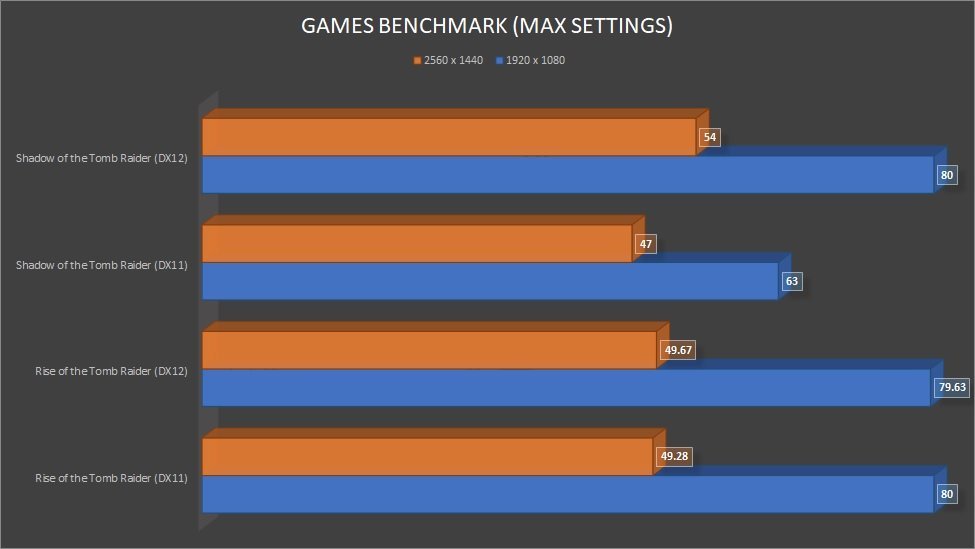 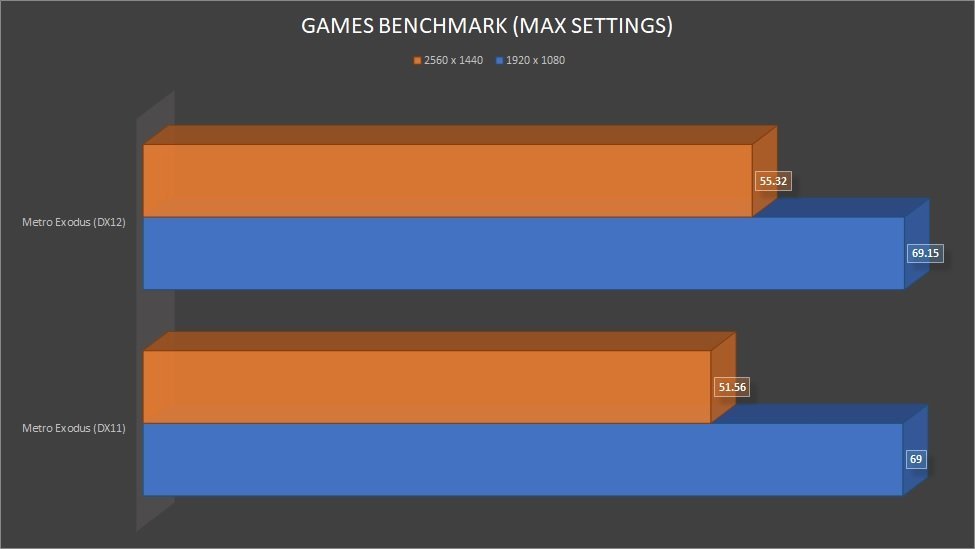 For our Ashes of the Singularity: Escalation test, we got 64fps on average for the DX11 mode at Full HD resolution, and an average of 69fps for the DX12 mode. We get a further improvement to 74fps when using Vulkan API. When it comes to 2K resolution, the game ran at 60fps on average with DX11, 67fps with DX12, and 69fps with Vulkan. We also ran the CPU tests of the game, where the 3800XT performed at 51fps at FullHD with DX12 and 55fps at Full HD with Vulkan API. 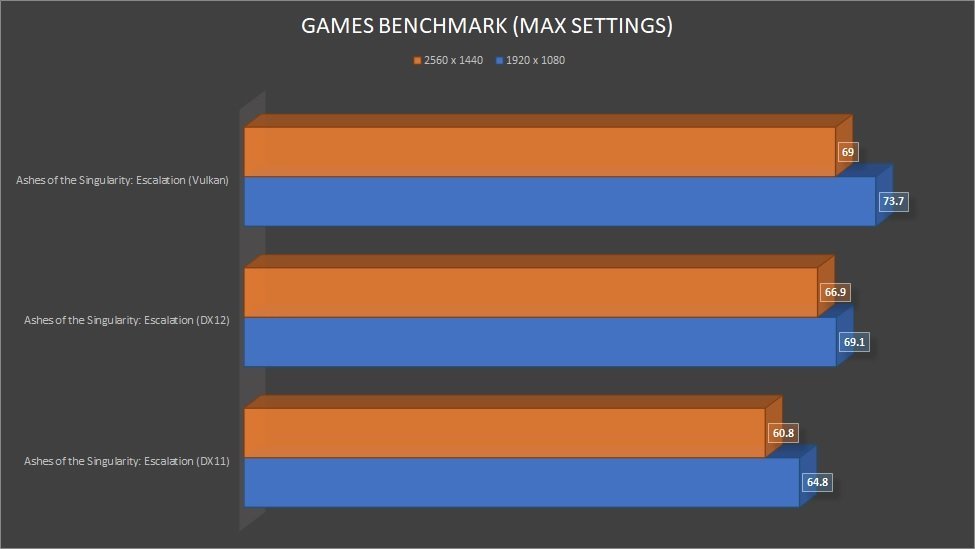 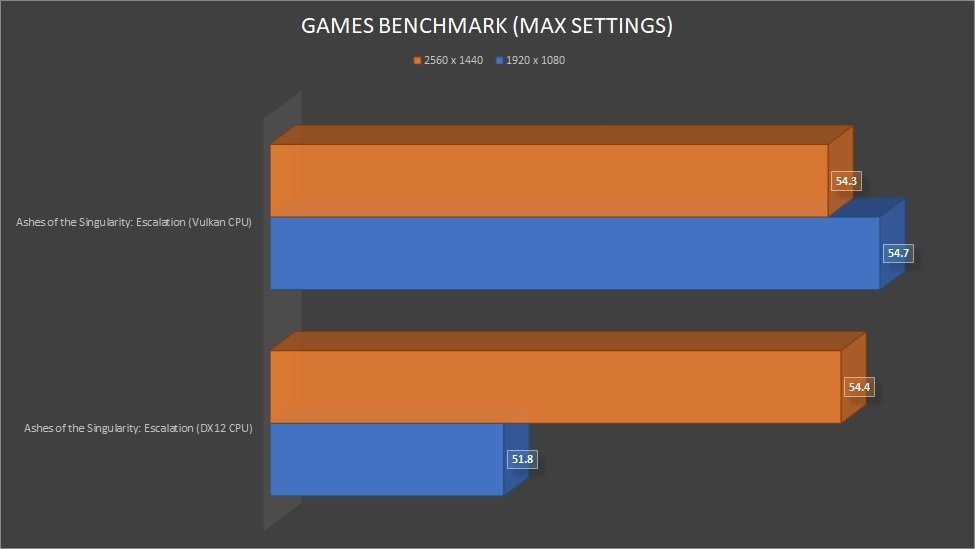 Verdict
AMD has come a long way from the days of FX processors where it lagged behind the competition to the latest Ryzen ZEN 3 architecture that now easily keeps up with Intel. And since the introduction of the first generation Ryzen processors, the company has proved to offer great processors at lower prices than Intel. Although released a bit back, the ZEN 2 architecture is an evolved version of the first ZEN architecture, offering great IPC improvements. And the XT versions of the Ryzen 3000 series are binned chips with faster boost clocks. The Ryzen 7 3800XT is the refresh of the Ryzen 7 3800X processor, offering 200 MHz boost clocks than the latter.

The Ryzen 3800XT also takes advantage of faster RAM chips to increase the performance with Infinity Fabric, as compared to the first generation ZEN chips. For those who don’t want to spend a lot on upgrades and want to stay with their X370 motherboards, the 3800XT is a good upgrade to consider, up until when motherboard manufacturers decide to update their X370 model BIOS to be able to work with Ryzen 5000 chips. We know that the latest Ryzen 5600X delivers better gaming performance, but if you require more cores for the same price, then the 3800XT is the better choice. However, those who already own the non-XT Ryzen 3700X/3800X may not benefit much from the new XT chips with respect to performance.

AMD redefines Gaming with the launch of 7nm gaming platform