ESET researchers discovered a new supply-chain attack compromising the update mechanism of NoxPlayer, an Android emulator for PCs and Macs. Three different malware families were spotted being distributed from tailored malicious updates to selected victims with no sign of leveraging any financial gain, but rather, only cyberespionage capabilities were seen. ESET dubbed the malicious operation NightScout.

BigNox is a company based in Hong Kong that provides various products, primarily an Android emulator for PCs and Macs called NoxPlayer. The company claims that it has more than 150 million users in over 150 countries who speak at least 20 different languages. That said, BigNox’s follower base is predominantly in Asian countries.

“Based on ESET telemetry, we saw the first indicators of compromise in September 2020. Activity continued apace until we uncovered explicitly malicious activity this week, at which point we reported the incident to BigNox,” says ESET researcher Ignacio Sanmillan, who revealed Operation NightScout.

Operation NightScout is a highly targeted operation with ESET researchers able to identify only several victims. Those identified victims are based in Taiwan, Hong Kong and Sri Lanka. “Based on the compromised software in question and the delivered malware exhibiting surveillance capabilities, we believe this may indicate the intent of intelligence collection on targets involved in the gaming community,” elaborates Sanmillan. 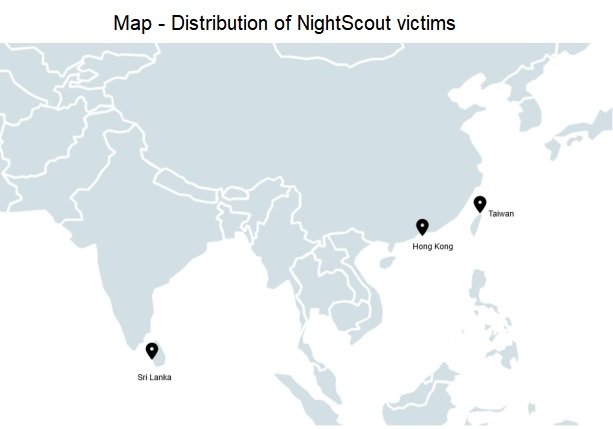 In this specific supply-chain attack, the NoxPlayer update mechanism served as the vector of compromise. On launch, if NoxPlayer detects a newer version of the software, it will prompt the user with a message box offering the user the option to install it, thus delivering the malware.

“We have sufficient evidence to state that BigNox’s infrastructure was compromised to host malware and also to suggest that their API infrastructure could have been compromised. In some cases, additional payloads were downloaded by the BigNox updater from attacker-controlled servers,” adds Sanmillan.

The third variant, PoisonIvy RAT — a remote access tool popular with cybercriminals was only spotted in activity subsequent to the initial malicious updates and downloaded from attacker-controlled infrastructure.

ESET has spotted similarities between loaders that our researchers have monitored in the past and some of those used in Operation NightScout. The similarities we see relate to instances discovered in a Myanmar presidential office website supply-chain compromise in 2018, and in early 2020 in an intrusion into a Hong Kong university.

“To be on the safe side, in case of intrusion, perform a standard reinstall from clean media. For uninfected NoxPlayer users, do not download any updates until BigNox sends notification that they have mitigated the threat, furthermore, best practice would be to uninstall the software,” advises Sanmillan.

How to safely browse the internet

Seven steps to cleaning up your online presence