AYANEO, a well-known domestic Windows gaming handheld brand, officially released the 6800U model, AYANEO 2 with a full display as well as the AYANEO GEEK for geeks. This is another milestone in AYANEO’s ultimate exploration journey.

AYANEO brings the new products not only equipped with AMD Ryzen™ 7 6800U, which is the ultimate performance, but also created an unprecedented full display in the industry. At the same time, as well as a thrilling black technology reformation. This is a completely different 6800U handheld, AYANEO 2, which is very subversive from the inside to out, and is about to reignite the enthusiasm of players around the world! The AYANEO GEEK, which pursues the ultimate performance, also excites players. The conference was hosted by Arthur Zhang, CEO of AYANEO. Through a wonderful unboxing video, Arthur announced that AYANEO 2, as the world’s first Windows gaming handheld with full display, is covered with a whole piece of glass on the front, showing an unprecedented overall appearance. Integrated design aesthetics, and brings players two simple and cool color options: Sky White and Starry Black. It combines technology and elegance and can be a dreamboat of Windows gaming handhelds.

The 7-inch large screen ratio breaks the edge constraints and has the advantages of impact resistance, scratch resistance, and high transmittance. The incredible wide view will bring gamers a completely upgraded immersive gaming experience! At the same time, AYANEO 2 uses AF anti-fingerprint technology on the screen surface, gamers do not need to worry about screen fingerprints affecting the game experience. It is worth mentioning that compared with the competitive products on the market, the screen of AYANEO 2, which has outstanding specifications with resolutions of 1920*1200, PPI 323, high brightness 400 nits, the color gamut reaches 135% sRGB, color temperature 6600K, contrast ratio is 1200:1 and overall details and views bring players a stunning visual feast.

In addition to full display, another leading strength of AYANEO 2 is the “baby sleeping position” grip which AYANEO team devotes to it nearly 1 year. This design is inspired by a baby’s sleeping position and has ergonomic comfort and the functional design is polished to the extreme. When players hold the grip, they will have the initial and brand new holding feeling plus with the natural placement of the thumbs and index fingers of both hands, you won’t get tired of holding it for a long time. Through a mortise clasp structure, AYANEO 2 achieves without a single screw exposed, as well as a perfect balance between the external shape and internal structure.

It integrates our deep integration and innovation with Gulikit in both software and hardware. The delicate and precise control sense and the millimeter-level precision feedback have achieved a comprehensive leap in the precise experience of game control for players. The Big Hall joystick has a larger travel range than the small joystick and can achieve more detailed operation. Compared to other large carbon film joystick, it has no drift, no dead zone, high precision, and excellent feeling. 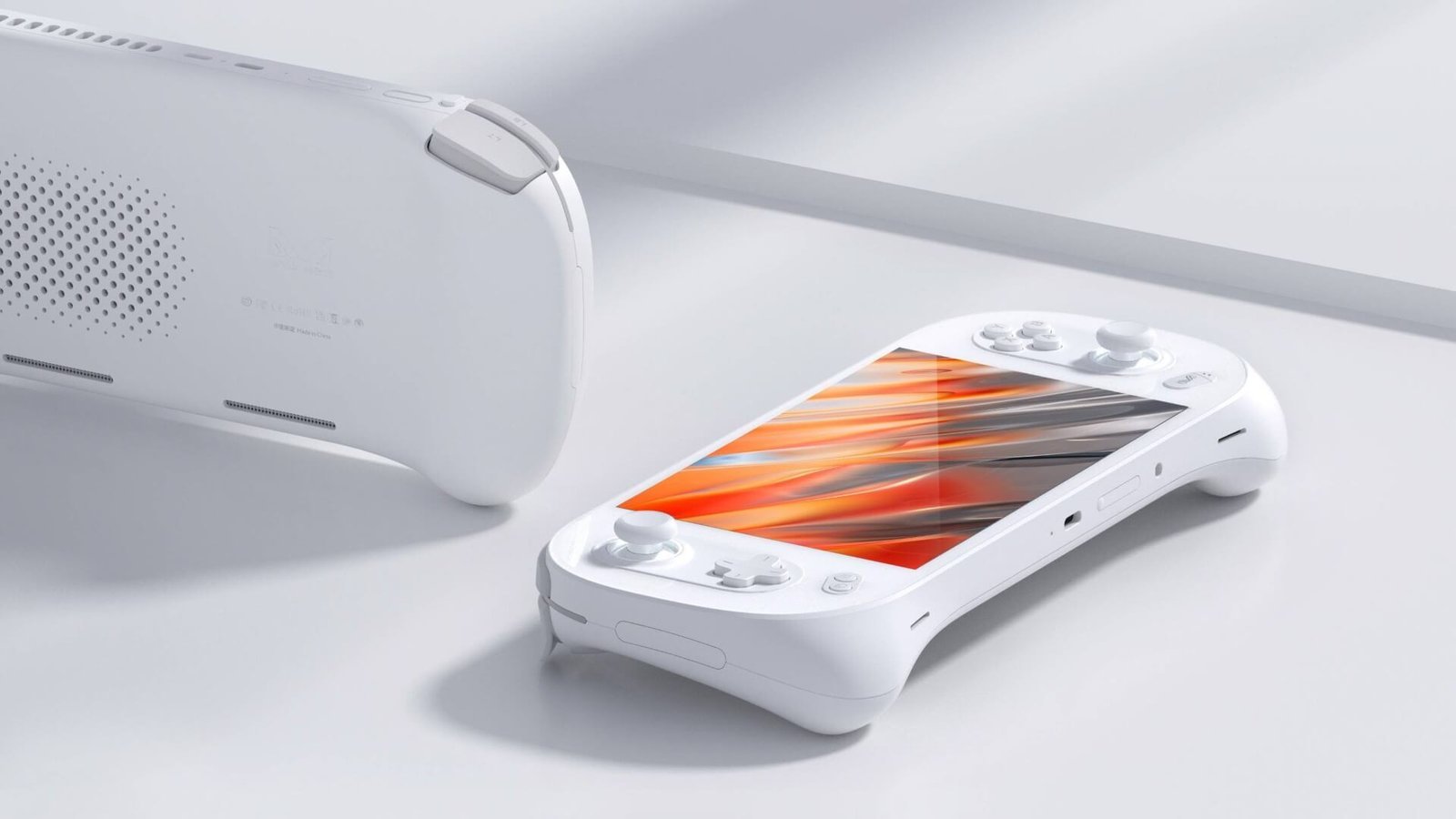 The Hall linear trigger on the AYANEO 2 has a long stroke, is even larger than some controllers, and brings micron-level precision feedback. Furthermore, the Master controller also supports sensitivity adjustment of the trigger, allowing players to freely control the trigger stroke and preemptively win the battlefield. This time, we bring unprecedented future technology to the vibration experience of Windows gaming handhelds, HD linear motor which is same as NS one. Compared to the X-axis linear motors we used in the past, HD linear motor feeling is more abundant and delicate, as well as multi-level and multi-dimensional vibration.

The AYANEO team overcame many design difficulties to perfectly integrate the HD linear motor into the body of the AYANEO 2, coupled with the motor vibration force adjustment provided by the Master controller, providing players with a perfect vibration experience and breaking the boundaries between game and reality.

In addition to the deep optimization of the vibration experience, this time AYANEO 2 also brought a huge surprise to fans of retro games —— the blockbuster future technology, “SoundTapMagic” automatically parsing the game audio to issue corresponding vibration feedback, it injects fresh and surging power into the retro game without vibration system, bringing it earth-shaking vibration experience changes, and back to retro times.

To provide players with easier operation, AYANEO 2 has created a new button system that is highly customizable. With the three customized buttons, LC, RC, and “=” keys, players can not only set up commonly used operating commands in Windows, or map to commonly used keyboard keys, but also associate opening any program or game, and add a command when turning on a program. As all you know, AMD 6800U is a cross-era CPU and it can be called super performance. The same TDP can support higher resolutions and higher game frame rates compared to previous generation CPUs. AYANEO 2 with AMD 6800U powerful integrated GPU and the game performance is soaring. Under the targeted structure and performance optimization design, and how powerful potential will burst out in the game experience, which is really what many players are looking forward to.

The 50.25Wh large battery provides continuous and stable battery life, which is the maximum battery capacity of the 7″ screen Windows gaming handheld, making the player’s portable gaming experience at another level again. AYANEO also launched a Linux-based and self-developed AYANEO OS for games, players can have more efficient operation efficiency, lower power consumption, more elegant interactive interface, and a more immersive user experience, and a focus on the game itself. The AYANEO OS runs PC games through the Proton compatibility layer, and has similar compatibility with Steam OS, AYANEO OS also has built-in the user-praised ES system, streamlined and optimized named ES mini, it can be perfectly adapted to the game handheld, AYANEO team will open source ES mini, so that users around the world can enjoy the optimization results.

Of course, AYANEO’s classic color Retro Power is not missing. The AYANEO team has equipped it with the strongest configuration. Friends who have been impressed by Retro Power since the AYANEO 2021 can experience the powerful charm of the integration of feelings and innovative technology on the AYANEO 2 Retro Power this time.

In early August, AYANEO announced that the GEEK product line would be separated from the original AYANEO 2 branch, providing players with a cost-effective but also with super performance and configuration. This time, AYANEO further unveiled the mystery of this product for players.

As a tribute to the geek spirit, as the first generation of GEEK, AYANEO GEEK and AYANEO 2 have the same size, the same [baby sleeping position] grip, and the whole machine 360° without exposed screws. The exterior has two extremely cool colors for geek players to choose from: Fantasy Black and Crystal Purple. The Fantasy Black Standard Edition uses the same screen of the previous generation flagship model NEXT, but the edge is reduced a lot, the resolution is 1280*800, the wide color gamut, and the maximum brightness is 600 nit, which is very suitable for those who want to put the 6800U performance on the 800P screen to play ultimate; Crystal Purple can enjoy the top-level configuration of the 1200P screen on the AYANEO 2. In order to let players have more understanding of the two products of AYANEO 2 and AYANEO GEEK, let’s take a look at their parameters and configuration comparison. Players and friends may not be sure which one they should buy, Simply, the performance release of AYANEO GEEK and AYANEO 2 is the same, but the configuration of AYANEO 2 is more high-end, more future technology, due to front bezel-less screen supporting, the overall visual effect is better. So if you do have enough budget, AYANEO 2 gives you the top requirements of your current Windows handheld. If you want the most cost-effective 6800U handheld, then the AYANEO GEEK is right for you.

This conference has always received extensive attention from the game industry and players, and AYANEO has always adhered to the original intention of “Real gamers, know gamers”. Regardless of cost, just to practice this original intention and concept. This time, with the new products AYANEO 2 and AYANEO GEEK, this sincere creation, brings a unique and pure Windows handheld experience, which is also where the geek spirit. AYANEO’s original intention has not changed, and it will be committed to starting a new journey with players and bringing players more dream handhelds that break through the limit.