This edition brings the overall performance to the next level with a dedicated GeForce RTX 3050 Ti GPU and an 8-core AMD Ryzen 9 5900HS CPU. The 360° hinge enables quick flipping from standard, tent to tablet mode for various purposes for multifunctionality. With a 16:10 WUXGA display in richer details, this lightweight 13-inch body weighs only 1.3 kg and supports 10 hours of video playback.

Last but not least, the upgraded Flow X13 also comes with an optional external GPU that adds power and flexibility in an ultraportable form factor. The innovative ROG XG Mobile incorporates up to a powerful GeForce RTX 3080 GPU connected directly to the CPU via a custom PCIe 3.0 x8 interface that’s faster than Thunderbolt 4. Together, the Flow X13 and XG Mobile redefine what’s possible with a 13-inch device, empowering users with versatile portability while providing desktop-class gaming performance and connectivity on demand. 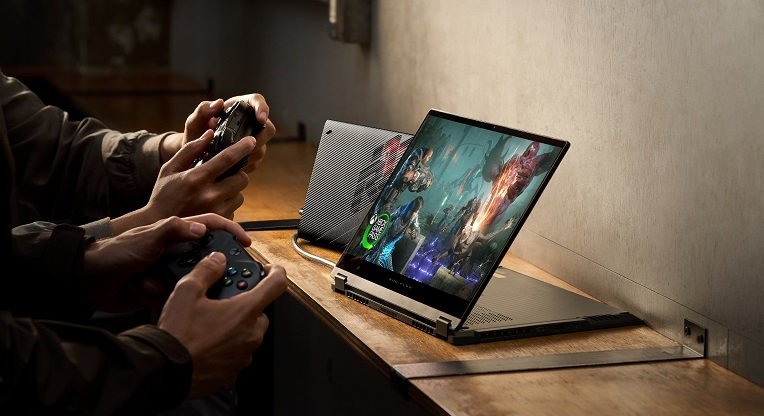 360-degree hinge and a touchscreen WUXGA display
The Flow X13 has a slick convertible design with a 360° hinge that opens up flexibility to follow your flow. Switch to stand mode to share your screen or tent mode for tight quarters, and get improved cooling that lowers processor temperatures by up to 8°C. The display is also touchscreen-enabled and outfitted with scratch-resistant Corning Gorilla Glass for added durability and functionality with stylus support for drawing and more.

The device’s versatility extends to WUXGA detail, which is also factory-calibrated to meet the PANTONE validation standard for color accuracy. While Adaptive-Sync synchronizes the panel’s refresh rate with the GPU’s frame rate to reduce lag, minimize stuttering and tearing, gamers can also enjoy an edge-to-edge display that boast a taller 16:10 aspect ratio with more space for toolbars and tabs. Versatility like this makes the ROG Flow X13 a real revolution. 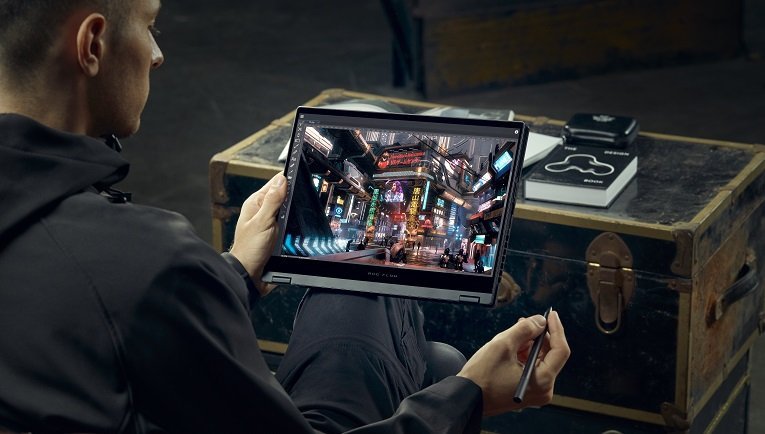 While upgraded Arc Flow fans feature 84 blades shaped to increase airflow by up to 13%, it also reduces turbulence and regulates airflow to lower noise and improve long-term reliability. The upgraded design features shorter anti-dust tunnels that leave up to 5% more space around the fan, improving airflow by up to 15%. Preventing the buildup of dust on the fan blades, heatsink fins, and other cooling components ensures the long-term stability and reliability of your system.