Acer has announced additions to its gaming portfolio, introducing the all-new Predator Triton 500 SE and the Predator Helios 500 notebooks, whilst updating and enhancing Predator Orion 3000 and Nitro 50 gaming desktops. Predator Triton 500 SE Gaming Notebook
The Predator Triton 500 SE (PT516-51s) is a “special edition” notebook designed for gamers who want a machine capable of getting through both the latest AAA games and the workday. Powered by up to an 11th Gen Intel Core i9 Processor, NVIDIA GeForce RTX 3080 Laptop GPU and up to 64 GB of 3200 MHz DDR4 memory, the notebook offers more than enough gaming power—but at just 19.9 mm (0.78 in) thin with up to 12 hours of battery life and NVIDIA Advanced Optimus technology, gamers can easily slip it into a backpack or squeeze in a bit of work between matches. The notebook’s sleek, clean appearance means that it could even double as a work laptop for professionals that enjoy gaming, and with up to 4 TB of high speed PCIe Gen4 storage, it has plenty of space for games, footage and the odd spreadsheet or two.

Whether playing games or watching films, players will appreciate the Predator Triton 500 SE’s 16-inch 16:10 display with an 87% screen-to-body ratio and three panel options, including a 165 Hz WQXGA LCD display; a 165 Hz WQXGA Mini LED panel with 1250 peak nits and 100% coverage of the sRGB color gamut; or a 240 Hz WQXGA IPS PolarBlack panel with a 3 ms response time and 100% coverage of the DCI-P3 color gamut for an even smoother gameplay experience. Just under the notebook’s all-metal chassis, a suite of thermal management technology ensures that everything runs cool. The Triton 500 SE employs Acer’s Vortex Flow cooling design, featuring a triple fan cooling system, including a 5th Generation custom-engineered AeroBlade 3D Fan, five dedicated heat pipes for the CPU and GPU, plus strategically placed intake and exhaust vents that continually draw in cold air and expel hot air.

An Intel Killer E3100 Ethernet Controller, Intel Killer Wi-Fi 6 AX1650, and Killer Intelligence Center provide gamers with the low latency and reliable connection necessary to clear out the online competition, while PredatorSense allows gamers to monitor their system, overclock the computer’s GPU and adjust fan speed with different modes such as quiet, extreme or turbo. As a final touch, the notebook’s full range of USB 3.2 Gen 2 ports, including dual Thunderbolt 4 Type-C ports which support DisplayPort and a SD 7.0 card reader, provides players with plenty of room for all their peripherals. Predator Helios 500 Gaming Notebook
The Predator Helios 500 (PH517-52) boasts up to an overclockable 11th Gen Intel Core i9 processor, NVIDIA GeForce RTX 3080 Laptop GPU and 64 GB of DDR4 3200 MHz memory, giving players more than enough power to take on all of the latest titles, while a pair of PCIe NVMe SSDs in RAID 0 and one SATA HDD means that the notebook has plenty of space for the next generation of games, too. Furthermore, a choice of displays lets players get the most out of this hardware. Depending on their preferences, users can equip the 17.3-inch Helios 500 with a 4K Mini LED 120 Hz display powered by AUO AmLED technology that supports full-array local dimming and is comparable to VESA Display HDR 1000, allowing for top-of-the-line color saturation and contrast, or AUO’s superfast FHD 360 Hz display rocking a 3 ms response time for the smoothest image possible.

All of this power is supported by a suite of premium cooling technology, including Acer PowerGem, a custom-engineered technology made from a metal-alloy polymer that sits on top of the CPU and serves to distribute the heat it generates throughout the device. Acer’s Vortex Flow technology leverages two fans, including a 5th Gen AeroBlade 3D Fan, to redirect airflow to critical components and boost performance during heavy gaming sessions. Users can use PredatorSense to enable Predator Pulsar lighting and customize light bars to personalize their keyboard via per-key RGB backlighting. Additionally, the WASD keys can be enhanced with Acer’s Racing keys or MagForce keys, which feature MagTek mechanical switches to make keypresses function like a controller’s joystick, giving players precise control over their avatar’s movement. Predator Orion 3000 Gaming Desktops
The Predator Orion 3000 (P03-630) is designed for gamers who are seeking the best-in-class hardware experience that a mid-tower rig can deliver. With an 11th Gen Intel Core i7 Processor and NVIDIA GeForce RTX 3070 GPU and up to 64 GB of 3200 Hz DDR4 memory, users can do it all—game, stream and edit. This performance is further enhanced by the new Intel Core i7 processor core architecture which transforms hardware and software efficiency, delivers smooth game play, high frame rates, and immersive realism.

The Predator Orion 3000’s GeForce RTX 3070 GPU is powered by the NVIDIA Ampere architecture, NVIDIA’s 2nd gen RTX architecture. Built with enhanced Ray Tracing Cores and Tensor Cores, new streaming multiprocessors and high-speed G6 memory, it provides the power necessary to rip through the most demanding games. To keep things cool, the 92×92 mm custom-engineered FrostBlade fan features special patented blades that deliver both high static pressure and air flow to ensure the Orion 3000 is sufficiently cooled to operate at optimum levels. There are four RGB LEDs built directly onto the hub of the FrostBlade fan, and users can further customize vertical light bars on the front of the case via PredatorSense, Acer’s customized utility app that allows users to manage and monitor their system, lighting, and fan speed from one location.

In addition to Intel Killer E2600 for high-end speeds and Wi-Fi 6 with MU-MIMO functionality, a wide range of USB 3.2 Gen2 ports, both Type-A and Type-C, and DTS:X Ultra audio, the Predator Orion 3000 also comes with an optional EMI-compliant tempered glass side panel that offers a peek at what lies within. With up to 2 TB PCIe NVMe SSD (1TB x2) and up to 6 TB HDD (3TB x2), there is also plenty of storage. 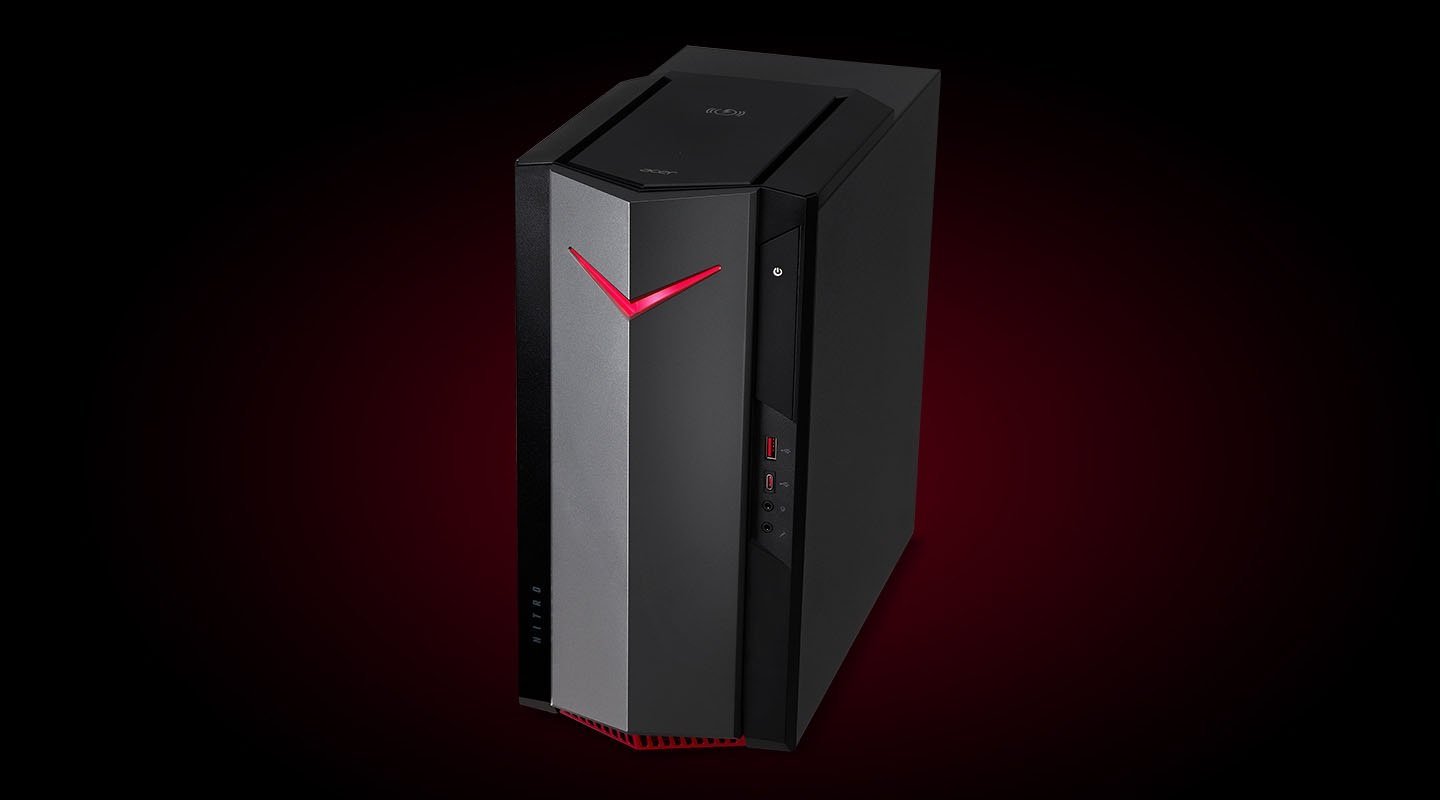 Acer Nitro 50
The Nitro 50 (N50-120 [AMD] and N50-620 [Intel]) series is for gamers who want improvement across the board; better gameplay, extra features and a more immersive experience. The desktop’s powerful processors—up to the AMD Ryzen 9 5900 Series desktop processor or the 11th Gen Intel Core i7 processor—are also sufficient for powering graphics-intensive tasks such as content creation and video editing, which is supported by an NVIDIA GeForce RTX 3060 Ti GPU. Both Nitro 50 models come with up to 64 GB of dual-channel 3200 MHz DDR4 memory, dual 3.5” SATA3 HDD Slots (Up to 3TB x2), M.2 2280 PCIe NVMe SSD Slots, 802.11ax/ac/a/b/g/n, Wi-Fi 6, Dragon LAN 1G Ethernet and USB 3.2 Gen 2 Type-C and Type A ports.

The black metal-cased Nitro 50 gaming PCs set the bar for gamers with high frame rates and lag-free game sessions. The Nitro Series desktops can be ordered with a built-in wireless charging pad which works with all mobile devices that support the Qi-standard. It can charge mobile devices phones faster than 5W wireless chargers and within 60 minutes. Other features include DTS:X Immersive Audio, Windows 10 Home, FrostBlade Cooling, Wi-Fi 6 functionality and burning red LEDs to set the mood for a gaming session. The NitroSense system management software allows you to monitor your CPU and GPU temperatures as well as adjust the fan speed.

How to know children playing too much video games