After a lot of anticipation and speculation, Pokemon Go’s newest event is underway. While players were expecting an extravaganza to celebrate the game’s first birthday, the new event has only one really cool feature: a new Pikachu variant.

While Pokemon Go’s press release confirmed that a new Pikachu variant was spawning in the wild, it didn’t mention two other Pokemon that are also tied to the event. If you’ve paid attention to past Pikachu events, you can probably guess one of the “surprise” Pokemon, but the other was a bit of a surprise for Pokemon Go fans.

Keep scrolling down to check out all three special Pokemon tied to Pokemon Go’s first birthday: Obviously, the centerpiece of the event is Pikachu, who can be seen wearing Ash’s original hat from anime.

“Ash Cap Pikachu” has popped up in multiple Pokemon games and promotions to promote the Pokemon anime’s 20th anniversary. Not only is this Pikachu popping up in Pokemon Go, it has also made appearances in Pokemon Sun and Moon and Pokemon Shuffle.

Japanese Pokemon fans can also purchase a TON of merchandise featuring Ash Hat Pikachu in Pokemon Center stores around Japan. Sadly, none of that merchandise has appeared over in the US or Europe, but it will likely go on sale when the movie comes out this fall. 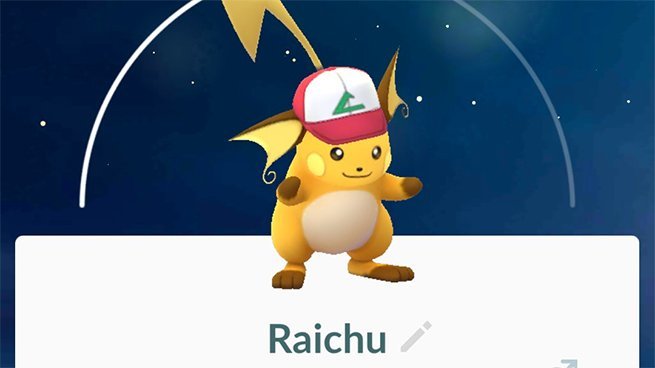 “Ash Hat Pikachu” will retain its distinctive cap if evolved into a Raichu. This isn’t exactly surprising news, as Party Hat Pikachu and Holiday Hat Pikachu also kept their headwear after evolving.

However, there aren’t any “Ash Hat Raichu” out in the wild. Multiple players have reported that all Raichu encountered during the event are hatless, meaning that you can only get this Electric-Type by evolving an “Ash Hat Pikachu.”

The nice thing is that you don’t need to rush to evolve your “Ash Hat Pikachu” right away, as it will keep its headwear when it evolves even after the event ends later this month. Pokemon Go also snuck in a surprise into its newest event. Any Pichu found during the event will also be sporting Ash’s distinctive cap.

There are a few caveats here. Pichu doesn’t naturally appear in the wild, so you’ll need to hatch it from an egg. Plus, “Ash Hat Pichu” will only hatch from eggs obtained during the event, so you won’t have any luck hatching eggs obtained before July 6th.

Luckily, Pichu hatches from 2 KM eggs, so you’ll be able to quickly cycle through eggs to obtain this Pokemon. Because it can’t be caught in the wild or evolved, Ash Hat Pichu will likely become one of the rarest Pokemon in the game after the event ends.